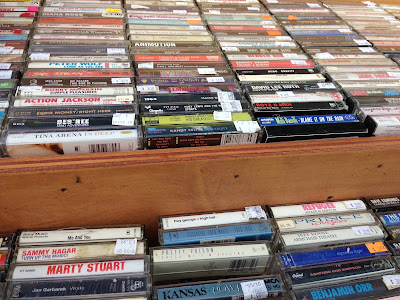 First annual! I saw a lot of folks online making fun of Cassette Store Day, and they had every right to: It's a ridiculous idea. But, I've been driving a car with a cassette deck in it for the better part of the last year and I've held onto most of my old tapes, so I've been revisiting those and found myself in a bit of a "cassette renaissance" as of late. It's every bit as beautiful as it sounds.
So: When I heard about CSD 2013 and saw that some local stores were participating, I thought I'd see what it was all about. If nothing else I just needed an excuse to go out and hit some record stores. Haven't done enough of that lately.
I met up with a friend outside of Music Millennium a little before 10AM this past Saturday, and we got to it. Music Millennium had been messaging and shouting a lot about Cassette Store Day in the weeks leading up to this, but they didn't really seem prepared. They had just started dumping boxes of old tapes into bins on the sidewalk when we got there, which was fine, but when someone inquired about the prices, we were told "99 cents and up,' which I eventually figured out meant "99 cents or priced as marked." Some of them had stickers, and some of the didn't. Regardless, none of these had seen the light of day in years.
I immediately pulled out a late-era, sealed Willie D cassette and asked the dude, "So this cassette is 8.95?" That's what the sticker said. And he said, "Yeah, I guess so." So that was idiotic on a number of levels. But I did end up finding some dollar tapes that I bought:

I've definitely seen Skinny Boys records around, but I don't think I've ever heard them. Thank god someone had the wherewithal to present the flip side of the Fat Boys coin. On the Zomba label.

Never heard of these dudes. But, it's from '92, it's on the Profile label, and it appears to be on the gangsta tip. Good enough for me. Features their track "Get Naked."

I told myself I'd never go in for post-Seminar Mix, but here we are. And yes, this is the album that contains "Put 'em on the Glass." Can't wait to bump this in the Volvo station wagon and watch the ladies disrobe.

Some more random rap from 1992. I've heard of these dudes, but I've never heard this record before. Looks to be a little more high-brow than JCD and his boys.

Already have this on CD, but I'm cool with having an official version to rock in the car. This is actually a really dark, kind-of strange record. Looking forward to getting into it again.

UTFO are really pretty terrible, but for some reason when I come across their shit in dollar bins and when they have ridiculous covers like this, I just can't resist. There's a song on this tape called "If You Don't Wanna Get Pregnant" which I am already afraid to listen to.


After I bought my tapes, I was given one of the promised "gift bags" from Music Millennium, which was just a Franz Ferdinand promotional sack with three more tapes in it. They are:

Dinosaur Jr., Icicle Works, Miracle Legion, and a bunch of other bands cover The Byrds. this might not be terrible.

These guys look ready to rock me.

Chinese Dog Girls - Live from the Theatre of Vampires (1990)

This one was sealed. Seems to be from the Seattle area and possibly experimental. Band name sounds like something they'd make up for a punk band on a TV show. 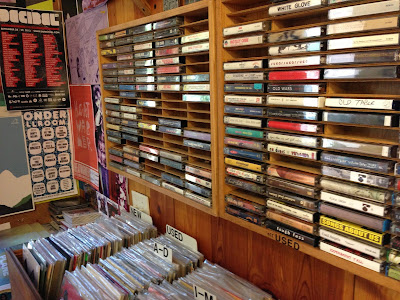 Next we headed to Beacon Sound, which I had actually never been to before. They had a few things out for Cassette Store Day, but no cheap tapes so I didn't end up getting any. But, I did end up finding some stuff on vinyl. 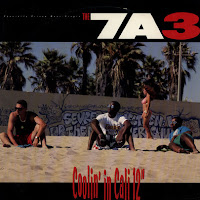 DJ Muggs, back when he was DJ Mixmaster Muggs. This is a cool single - features extended and dub versions of the title cut, as well as two more tracks on the B-side. 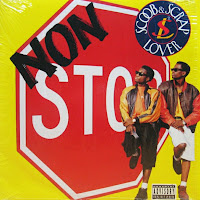 This was my crowning score of the day. I've been looking for this single forever, holding out on the internet, hoping I'd find it in the wild. And I did. Big Daddy Kane's backup dancers taking center stage and dropping some real shit. Two tracks on here and they're both solid. 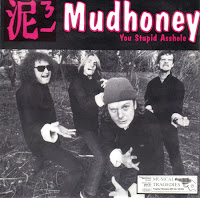 Yes, I've already got three versions of this, but I didn't have this one. This is the semi-rare saw-shaped pressing of this record on clear vinyl. 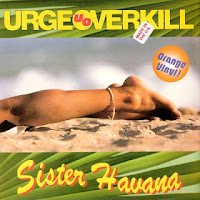 Orange vinyl but both songs on this single are album versions. Come on guys, gimme a radio edit - something! 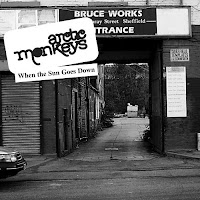 Early Arctic Monkeys single that I gladly paid a few bucks for. Features the non-album track "Settle for a Draw" on the B-Side. 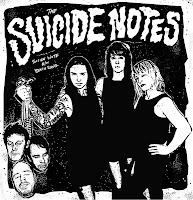 I'm friends with one of the girls in this band and I had been meaning to buy this for a while. So I did. Peppy lady rock that wants to take you to the beach and drown you. 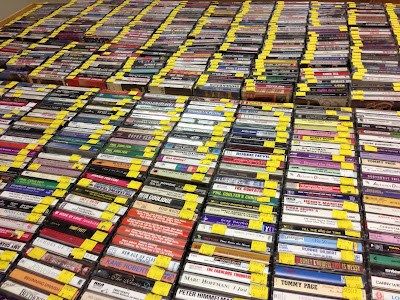 Next we went to Everyday Music on Sandy, which I had already assumed would be an assfest. To my surprise, it was the best stop of the day. They had a bunch of old tapes out, and they were either 50 cents or a buck. I bought a nice stack.

I know I used to own this on cassette, but it got lost somewhere along the way. Now it is back. "Dropout" is still an amazing song.

Sure, why not. Another black cassette, but this one can be chalked up to the fact that that's how Sub Pop did it.

This was the only tape I bought all day that I got home and realized I already had. I should've known with this one. If anybody wants a sweet copy of the Doors' debut on early-80's Elektra cassette, you just let me know.

I always meant to get into Big Audio Dynamite, and I never got further than a "Rush" maxi-single. Now it's time to take it back to '85, on some "see label for sequence" shit.

Very excited about this one. I fancy myself a Kool G Rap fan, but I don't even own this, the guy's solo debut, so I'm really just a lot of talk. And yes, that is Nas on the cover.

I will listen to the shit out of this in my car, and I'm not going to sit here and act like I won't.

Another one I used to own some 20+ years ago. Couldn't resist a trip down memory lane, though I'll probably listen to "Kill Your Television" once and shelve this thing.

I know I used to have this tape, but apparently I lost it. Now it's back again. Always good to keep a copy of this one around.

I somehow missed the Brand Nubian boat when I was younger. Hope I can catch up now, but this cassette is a little rough looking. All cracked and shit. It was a gamble! 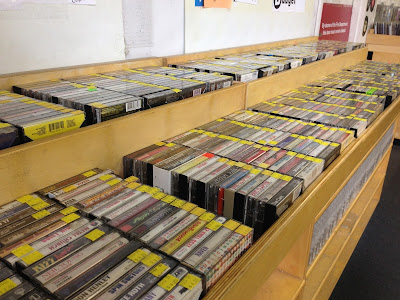 After the success at the Eastside EM, I thought it was definitely worth checking out the downtown location. They didn't have quite as many tapes out, and instead of the 50-cent/dollar prices, they were all two bucks. Laaaaaame. But I still bought a few things.

When it comes to albums that I came really close to purchasing a bunch of times when I was a teenager, this one is, well, it's part of a long list. But I was a big fan of the first Charlatans record and then sort of fell out of love with them after that. Always wondered what this album was like. Now I'll find out.

Just reliving so many memories, you guys.

Oh, and it's the BMG version! You spoil me.

Put on your bucket hat and get ready for a hybrid sound that'll knock your ponytail off! I'm covering all my B.A.D. bases here.

Thought I might have had this one but was happy to find that I didn't. The grungiest grunge that ever grunged.

The one bonus of the downtown EM situation was that if you bought any cassettes, they hooked you up with three tapes from Bleeding Gold, a label that was sponsoring their efforts (or something like that). So, I ended up with these three tapes, too:

No idea. But I'll give it a listen.

Seriously no idea. I see what they did with the title there, though. These did come with download codes, too. Nice touch.

This tape is purple. Very bold. 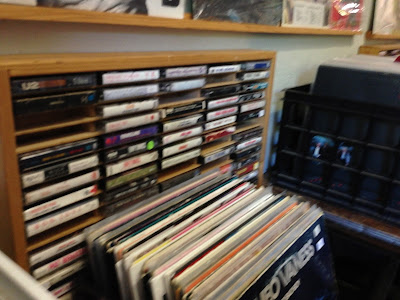 Next we went to Boom Wow Records, which wasn't doing anything for Cassette Store Day, but my friend had never been there and I hadn't been in a while so, you know, any excuse. Picked up a couple things: 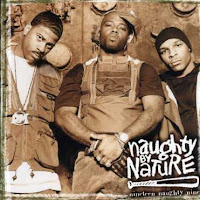 Sealed and the price was right. Been putting this one off because it's really not that great, but I couldn't pass up a copy with the original promo sticker still intact - Their Arista debut! Oooooooh.

Also sealed. Four tracks from the ill-fated Truth Crushed to Earth... LP. Boom Wow had at least three of these. 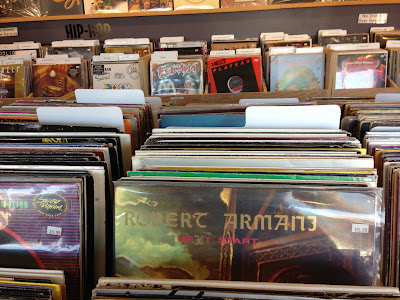 For our last stop, we hit a place neither of us had been before, Future Shock on East Burnside. They weren't doing anything for CSD either, and though they did have some tapes, they were trying to sell them for four bucks so fuck that. I did pick up a couple records, though. 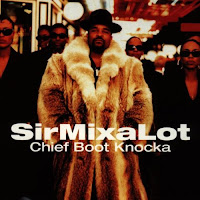 It seemed like the right thing to do. Price was right. Don't you dare judge me. 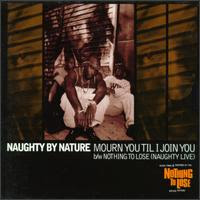 Naughty paying tribute to 2Pac and making everyone uncomfortable. Features another non-album cut on the flip, "Nothing to Lose (Naughty Live)," which is much better.


Pheeeewwwww. That was a beast. And I probably spent less on this expedition than I have on any in recent memory. Not bad.
Posted by Wockenfuss at 2:24 PM 3 comments: