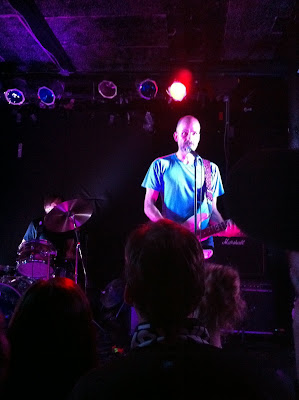 Pond, one of the most tragically underrated bands of the 90's (see my gushing here, here, and here) broke up 13 years ago, and since then, they've played one reunion show, which was at the Crystal Ballroom about five years ago. (It was a Portland 90's bash - the other bands on the bill were Crackerbash, Sprinkler, and Hazel.) We were shocked that they played that gig, and were positive it would be a one-time thing. It's not that their breakup seemed particularly acrimonious, or that they clearly had beef with each other, I just always got the vibe that the band was something that the individual members were looking to put behind them. The first reunion gig was brief shining light, and we bathed in it while we could.

It's a shame that it took Portland's legendary Satyricon club closing its doors forever to bring the band back from the dead one more time, and in a perfect world, that certainly wouldn't have been part of the deal. So, am I glad Satyricon is closing? Absolutely not. I've seen some really memorable shows there, and even played a few myself. I love(d) it there. Am I glad that Pond got back together for one more night? You have no idea. So, yes, the air was thick with bittersweetness that evening, but while the band played, it was nothing but goodness.

My brother was in town from AZ specifically to see the gig, so it felt like even more of an event to us. We got there promptly at 9, and the place was already packed. Thankfully I had will-called the shit out of some tickets, so we strolled right past the poor saps waiting for last-minute tix in the rain, and made our way inside. Good timing. Fellow old-school Portland sorta-weres M-99 opened the show about 10 minutes after we stepped inside. I'm not going to pretend like I'm familiar with any of their stuff. Never saw them back in the 90's. But they put on a fine show, and as the length of their set grew, it made me more and more hopeful that Pond would be allowed (and utilize) the same amount of time.

M-99 played for probably about an hour, and they were fun to take in. But we were antsy for the main attraction. When they finished up and Pond drummer Dave Triebwasser started setting up his drums, we were certifiably giddy. Triebwasser looks about the same as he did in the 90's, though he was peering out over some glasses, which made him look comically elderly. Good stuff. Charlie Campbell and Chris Brady followed, and they too have yet to be severely ravaged by age. Not that it would matter, but it's nice to see the Pond guys still looking spry. Anyway. 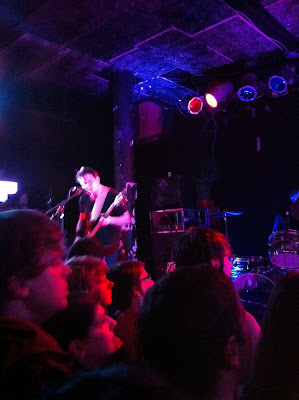 They attempted to start the show by barreling into "Van," and that would have been super-sweet had Brady's bass not been cutting in and out. So, they had to start it over, and they eventually got through it, though it was a bit timid. Their second number was also hindered by minor technical glitches, but after that, they rolled hard into the old favorites and, for a band that's played twice live in the last 13 years, they sounded fantastic.

I'm terrible at remembering setlists, so I'm hoping some of my faithful readers can help me recreate it. Usually I nerd out and type it into my phone, but I could barely move. Snapping these shitty photos was dicey. This I do know: They played "Twins," "Spots," "Sideroad," "Young Splendor," "Glass Sparkles in Their Hair," "Spokes," "One Day in the Future," "Grinned," "Moth," and "Agatha." You guys will have to help me with the rest.

Everyone expected them to close with "Filler;" they did not. No one ever expected them to play "Moth;" they did. It's little things like that that make shows like doubly fun. You never know what the band's going to come out and do. I didn't expect to see Chris Brady taking pulls off a fifth of Jim Beam during the show, but there he was, chugging away. I didn't know that the Trieb drummed barefoot, until I saw him putting his shoes back on at the end of the set. What a Stallion.

And now I'm even more happy, because I just found this YouTube channel that has what seems to be video of the entire show. I love these times we live in. I guess that takes care of my setlist problem. Whatever.

We can discuss all this further in the comments. Let the praise begin.

Oh, here's the setlist dude has listed on his YouTube page:

Sound right?
Posted by Wockenfuss at 11:46 PM No comments: