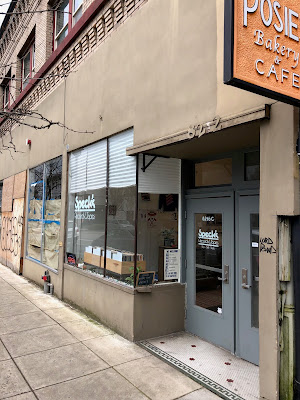 I'd been meaning to check out Speck's for close to a year, and I finally made it over last Monday night. (We have a zero-year-old at home and my free time has been mercilessly ripped from my grasp, never to return.) It's in the Kenton neighborhood and has only been open for about a year.

Folks, this is my kind of record store. Cassettes, well-organized crates, a "NW" section which I pulled a ton of records from...I really don't have enough nice things to say about Speck's and Michael, the dude who runs it. He was very cool to me, his prices are mad fair, and I went home with a gang of great stuff. First, my cassette purchases: 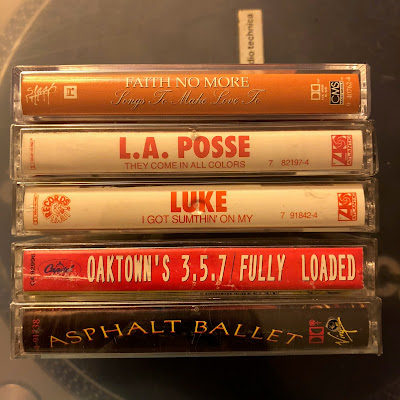 That Faith No More tape is a rare one for me. I have the maxi-CD (the same one I've had since I bought it when it came out), but I'm not sure I've ever even seen the cassette. Looks great right under Angel Dust.

The L.A. Posse tape is sealed. The Luke tape is the clean version of his I Got Shit On My Mind album, which I have the cassette of. Thank god. Definitely need to keep both versions of that on hand. I think that Oaktown's 3.5.7 tape was a buck, which I was happy to shell out. I bought that Asphalt Ballet tape (also sealed) because I've got this KGON calendar from 1992 that I hang on my wall in my basement and every February I stare at them, wondering what exactly their deal is: 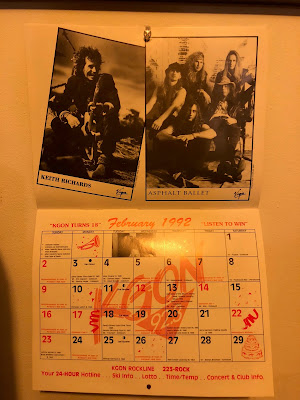 You just know those dudes were ass-rocking in lace spandex a year before that photo was taken. Alright, let's get into the records: 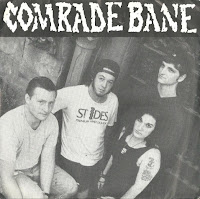 Out of Portland in '93 and I'd never heard of this. Nabbed it for cheap. It's Gits-y.

And that was the only 7" I picked up. 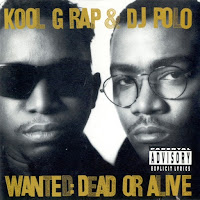 Cleeeeeeean copy of this for a real reasonable price. Just realized it's a 1997 reissue but whatever. Early Freddie Foxxx verse on this one. 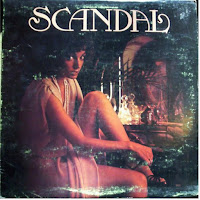 Pop/rock out of Eugene, OR. Because the internet is great, here is the Eugene Register-Guard reviewing it in December of 1978. And here's the title track. 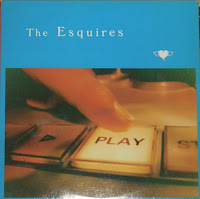 Funk-blues out of Portland on the Flying Heart Records label. This one looks real sweet. Includes a lyric insert. 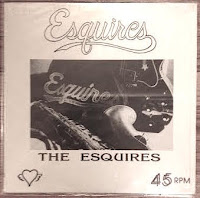 Earlier release by the same gang of Portland musicians. They have another LP in between these two; I'll have to keep my eyes peeled for that one. 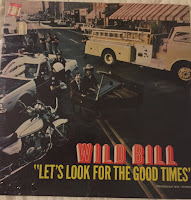 Folk/country out of Vancouver, WA. Pretty big-time album cover for a private-press-type situation. Wondering if ol' Bill legit brought the cops out with his wacky antics. 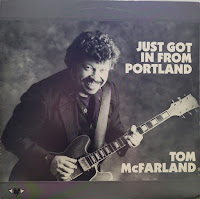 Also on the Flying Heart Records label out of Portland. Tom's looking to play some blues for you. 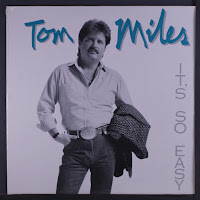 Private-press country-pop out of Portland. 19th and SE Morrison, to be exact. Having trouble finding much info on this dude. 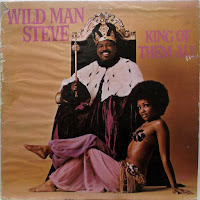 I own another album by Steve, his Wild! Wild! Wild! Wild! LP, so I guess I figured I might as well pick this one up. This is one of those "party records" you've heard about. You honestly don't see these in the NW too much. I always see them when I'm in LA or the East Coast. Which probably makes sense. 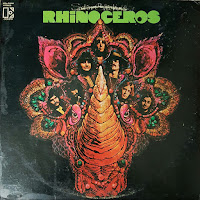 I have the first Rhinoceros LP, which I bought a few years ago after looking at it and seeing that Billy Mundi - who previously was in The Mothers of Invention - played drums on it. I liked it and I'm curious to hear this one. It's jammy, freewheelin' peacenik rock, I know that already. 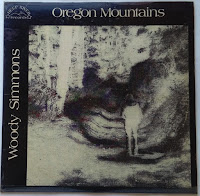 Private-press lesbian virtuoso banjo jams. Title says Oregon but it seems to be out of San Francisco. 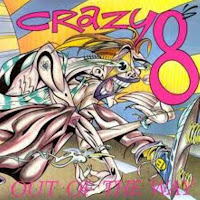 I think this might be my first Crazy 8's record. Portland's own ska-pop fun-time band. I'm just a little too young to have been fully aware, but I remember hearing their name all the time on the radio when I was a kid. They may have played the Starry Night. I bet they did.


Can't wait to get back to Speck's. Too much good stuff. I gotta be careful. 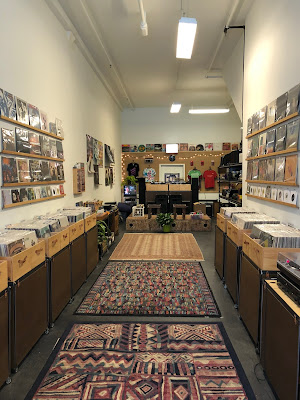 Posted by Wockenfuss at 9:35 PM No comments: