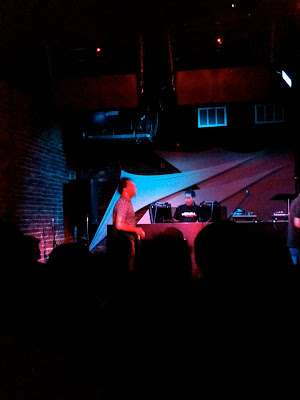 I never thought I'd leave a Busdriver show before it was over, but we did just that. It was 2AM, there seemed to be no end in sight, and we walked. I didn't have a bad time, but it wasn't what I had hoped for. And that's my fault: I should have done my research. And who are we kidding? I would have gone anyway. But the $15 ticket price left a sour taste in my mouth. Still, it was an experience. And I like those.
Posted by Wockenfuss at 1:04 AM 2 comments: 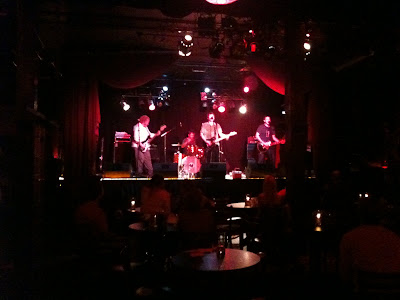 It's been a few months since I saw the Best Kissers play their warm-up show at Slabtown, and I was definitely looking forward to seeing them again. This gig was - from my understanding - to be their official "First Big Portland Reunion Show," and they were fresh from playing their "First Big Seattle Reunion Show" the night before.

The band was loose (read: a little tipsy), but it didn't prevent them from putting on a fine show for the devoted fans in attendance. (I was happy to see that this show was more well-attended than their previous one.) Gerald was in high spirits, clearly still amped up from playing the night before at the hallowed Tractor Tavern. He was definitely chatty, I'll say that. But when it came time to run through the tunes, he was all business. His voice was a little worse for wear, but he's still probably transitioning it into rock mode. He'll get there.

The setlist was different from the show at Slabtown, with the band both mixing up the order the songs were played and adding some new ones. (They were pressed for time at their last show, so I assume a few tunes may have been sacrificed at that gig.) They even added and actual brand-spanking-new song to close out the set. Because I am a nerd, I once again jotted the setlist down into my phone. Here's how it went:

"Melanie"
"Countin' Out Dexadrine"
"Worried About It"
"Hit Parader"
"Slightly Used"
"Roadside Attraction"
"Broke My Knee"
"?" (Still don't know what this one is - somebody help me out.)
"Royal Pain in the Ass"
"Lonely Enough to Lie"
"Smoke Rings"
"Bleeder"
"Miss Teen U.S.A"
"They Give Each Other Diseases"
"Pickin' Flowers For"
"Vicodine"
"Are You Happy Now?"

They continue to play a really cool mix of songs from all of their records, and I think it's great that they're playing a bunch of stuff from the legendarily-shelved Yellow Brick Roadkill. I was really excited to hear "They Give Each Other Diseases," because it's one of my favorite Kissers songs. And "Bleeder," too. That one didn't make it into the set last time.

Ah, but the most exciting thing about this show was the release of a new CD from the band. No new music, mind you, but a new compilation of most of their early stuff, titled Skinned My Heart, Broke My Knee. 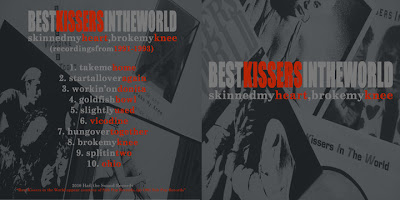 I was excited to finally have CD-quality versions of the songs that had only been previously released on vinyl, so I was a little disappointed to find that they were just rips of the records. (Took care of that myself a long time ago.) But for anybody who doesn't want to hunt this stuff down one-by-one, this is a great comp of the band's early work. I was most excited about the extensive liner notes on the inside written by Mr. Collier, which both give a little bit of history about the band, and individual breakdowns of the tracks on the Sub Pop EP. Not going to go into detail about that, because you should just buy this thing and read 'em for yourself. Though I'm not sure where you can do that yet...

Now the band needs to find a way to release Yellow Brick Roadkill. The world deserves to hear it. Though I do secretly enjoy being one of the few who owns a copy of the CD. And, you can find it if you poke around a bit on the internet. Which I normally don't condone, but you literally can't buy it, so I say check it out.

By the way, the band's new official site is here.
Posted by Wockenfuss at 1:24 AM No comments: