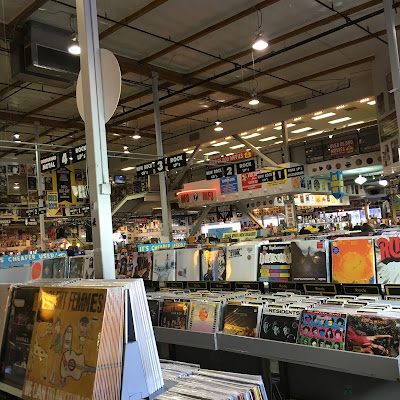 Amoeba is essentially a time warp. I have been in no other record store in the past 15 years that is so busy, has so many employees working, and is filled with so many people who seriously give a shit about physical media. I was in the VHS section upstairs and a guy looked in my basket and said that I got a sweet deal on the $1.99 Jane's Addiction "Classic Girl" CD single I was picking up. I told him I used to have it in high school but lost it somewhere along the line; he said he still had his from the same time. And then I told him how I liked the single because it has the "LA Medley" on it, which is one of my favorite tracks of theirs. And then we went our separate ways. And it was pleasant. And then I bought some VHS tapes. 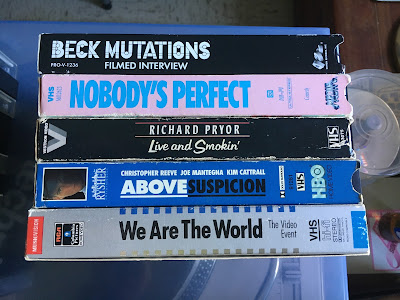 Here's the other stuff I bought: 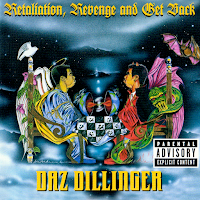 Daz Dillinger - Retaliation, Revenge, and Get Back (1998)

I've had my eye out for this one for like a decade. My friend lent me his 2-LP copy right after it came out and I got hooked on "Oh No," which is one of the greatest West Coast rap songs ever. He eventually retrieved it and though I've had a digital copy, I'd been wanting the wax back. Just watched a copy go for $28 on eBay. I got this one for 10. 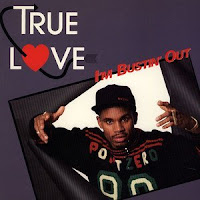 Wasn't gonna pay more than three bucks for this, and I didn't have to. My man's gonna love you up real good, girl. There is also a song on this LP called "You're So Fat." 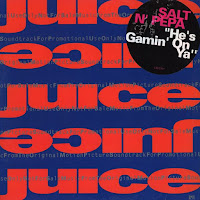 Back of this is just the Juice soundtrack cover but with no lettering. It's pretty sweet. 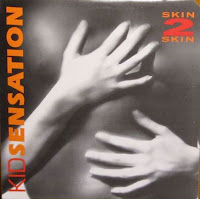 Girl, Kid Sensation's gonna love you up, too, but it's gonna be a whole lot less romantic. Seattle's own, struggling to find his lane in the early 90's. Still decently dope. 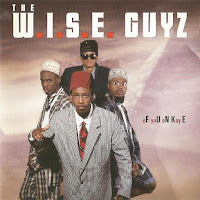 Sealed. I had never heard of these dudes and the music's not quite as serious as that cover. Very '89. This video is ill. 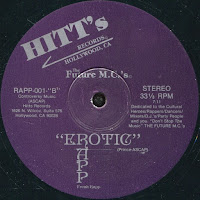 I grabbed this just to hear how blatant the Price bite is, and boy, is it just rap karaoke, but hey: it was 1984 and everybody was still getting this all together. The "State of Shock Rapp" is the same deal: straight cover of the original with rappin'. I knew the Future M.C.s sounded familiar to me, and it turns out I have one of their other records. It features a cover of "Take Me With U." Safe to say they found their niche. 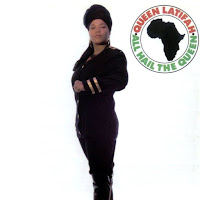 I've never heard this record aside from maybe the few singles. Queen Latifah can rap, man. And she's repping the original Flavor Unit on this one. She's a STRONG woman. 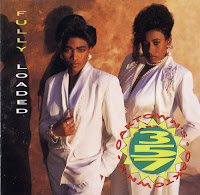 This was the second and final full-length from Sweet LD and Terrible T, and it's dipped in 1991. In their defense, they were proteges of Hammer, so it wasn't like they weren't blatantly going for mainstream success. I bought the 12" single for "Turn it Up," the lead single from this album, at some point in the last year or two. No telling how many high school dance routines have been performed to that one.

That was it for records. Here are the cassettes I picked up: 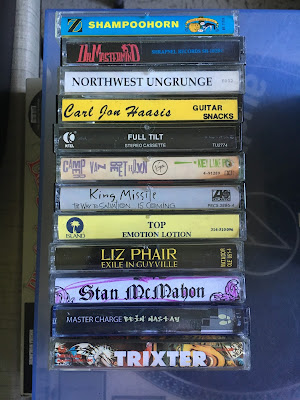 Some interesting stuff. I always thought "emotion lotion" was a Mr. Show joke, but apparently it is also an album by a band called Top. Or maybe it's both. I dunno. That Master Charge tape is crazy low-fi lean rap from Dallas and it is flat-out amazing. I can find no trace of it online. I think that King Missile promo tape might have the original title that contained "coming" before its removal before wide release. Also, this tape, in particular, is notable: 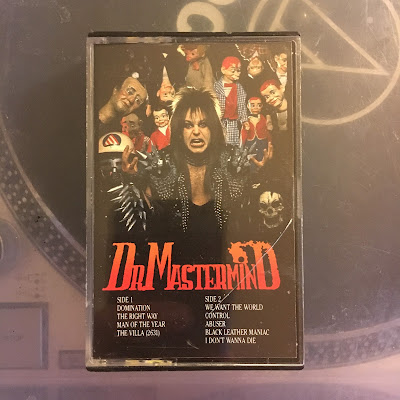 I bought this cassette for two reasons: First, the combo of that cover and the promise of a song called "Black Leather Maniac." Second, because I noticed Deen Castronovo played drums on it. He recently got let go as the drummer for Journey after a long time, but before that he played with a ton of people, like Bad English, and before that he grew up in Oregon and played in a Portland metal band called Wild Dogs. I passively collect local Portland music on vinyl, and I've got the first two Wild Dogs albums.

Turns out Dr. Mastermind is none other than Matt McCourt, the lead singer of Wild Dogs, and this was his project following the dissolution of that band. And I found it on cassette in Los Angeles. It's these cosmic connections we make, by brethren.

And yes: "Black Leather Maniac" is sweet.
Posted by Wockenfuss at 9:51 PM No comments: 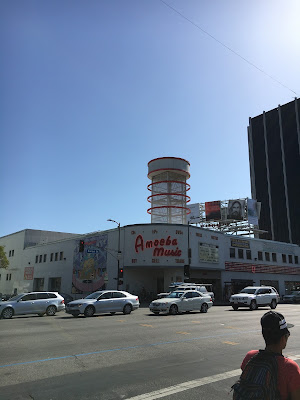 It's an annual tradition. I made it back to the best record store in the world, and as always, I went in not knowing what I'd find, and left happy. The 7" section hasn't been too kind to me these past couple trips. Used to be able to walk with armfuls of Sympathy/Sub Pop singles; now the boxes just seem to get emptier and emptier every year. It's weird. But it ain't like I have trouble finding other stuff.

I got to Amoeba around 4 on Wednesday night, went over to the rap section, and there was Kyle Mooney from SNL flipping through the hip-hop. I wasn't going to say anything but then he came right over to where I was standing so I told him I liked his work. And, you know, we ended up chatting for a few minutes. No big deal. It's not like I don't see celebs on the regs when I'm making the fucking scene down there, you know? Seriously: not a big deal. He told me to "have a good night, man," and I said the same, and it just wasn't a huge thing. Just two guys, buying some records, exchanging some pleasantries. Pretty standard sitch for me, if I'm being honest. Totally not a deal at all, let alone a big one. He mentioned he was in town working on "a project." And I was just like "Oh, cool, nice," because it was, you know? Nice of him to feel like he could tell me that. I don't know. Maybe the whole thing's not even worth mentioning. 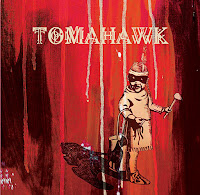 I used to be such an easy mark for any of Mike Patton's side projects but at some point I ceased keeping up. So, when I find a sealed Tomahawk single for two bucks from a few years back, I use that opportunity to get back on the horse, if only briefly. 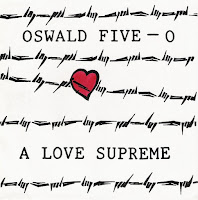 The Eugene band's first 7", I believe. Red heart on the cover appears to be hand-colored. 33⅓ 7". You can almost smell the dank basement. 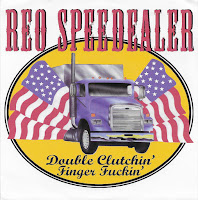 Hey, why not. Original name before they got sued, maaaaaan! 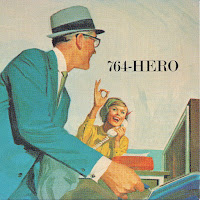 Man, these are a great couple o' songs. Dude just feeling the shit out of some feelings. Record says "PLAY AT 45RPM" on both sides and both sides are 33⅓. Fucking wasting my time. 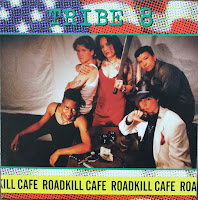 I picked up my first Tribe 8 7" at Amoeba two years ago, but they're a band I've been familiar with since the 90's. Strangely topical: the A-side here, "Wrong Bathroom," is about a girl being told to use the men's room because she looks like a guy. Side B is...you guessed it: a live cover of "Radar Love." 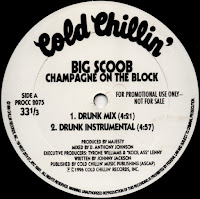 Scoob Lover my brother! I already have the standard version of this; this is the white-label promo. 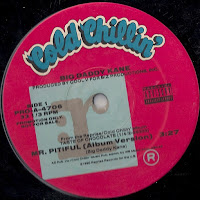 Speaking of Scoob. I'm just buying any and all BDK records at this point. Promo single. Album version on both sides. 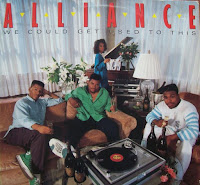 Rap from '88 that I wasn't familiar with. Dudes on the cover straight livin' large. Positive K catching some writing credits on this thing. Sampling Prince on the title track. Shit really WAS better "back in the day." 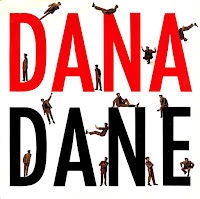 About time I found this. Dana Dane was one of the first rappers I ever listened to and somehow I have never come across a decent copy of this one vinyl. This one's got a cut corner on the bottom right but the rest of it is gold so I'm solid. Now go watch the dope vid for "Nightmares." 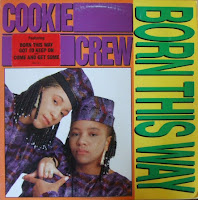 I'd seen this album before, but I'd definitely never heard it. Bought it because 1989 is the year but damn if this thing ain't wild on some UK dance-track fast-rap. I'm feeling the flow. And doing the knowledge. 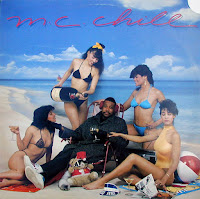 I bought a sealed copy of this record that might have been my most expensive purchase. It wasn't really that much, but enough that I thought twice. But I couldn't resist that cover. Dude sounds very Run-DMC and that's about what I figured. 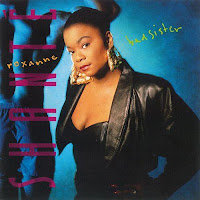 I thought I had some other Shanté records, but I guess I don't. This one came out in '89 on Cold Chillin' and was produced and mixed my Marley Marl. So you know I'm down. Is she the strongest rapper? No, no she is not. 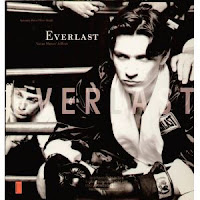 I'm such a sad loser for buying this. Doesn't even have any remixes on it.

Next up: I buy more rap records from the late 80's!
Posted by Wockenfuss at 10:10 PM No comments: