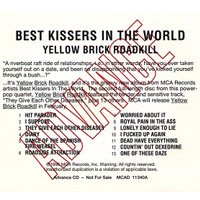 This is the fabled tale behind the Best Kissers In The World album that is, but never really was. Lucky for us completists, some of those advance copies are still floating around. I think I got mine from eBay. And I'm damn glad I did, because it's a great album, probably better than Been There. Some of the grit has returned, and Collier pens some of his best lyrics since their debut EP.

The opening track "Hit Parader" is just the right kind of bitter rocker you would hope for from a band who's spent their entire career being dicked around by the corporate monstrosity that is (was) the music industry. "I Suppose" is more polished but still a bit harsh, and it leads into the poppier "They Give Each Other Diseases," which is probably my favorite track on the album. Again, it seems like the old Kissers: semi-dirty lyrics and a really memorable hook. And there's even another prescription drug inspired track, the super catchy "Countin' Out Dexedrine."

"I Fucked Up Again" is, in hindsight, a precursor to Collier's alt-country solo career that quickly followed the breakup of the band after this album was shelved. Despite its blunt title, the song is actually sincere in its own way, a slightly twangy ballad that keeps it sparse but solid. "One of These Daze" ends the album, following suit with the musical format but keeping the lyrics a bit lighter. Like any good 90's album, this last song is followed by a minute of blank space and then blares into a chaotic mess that almost resembles a song.

Somehow, it's a fitting end for the band.

Check out "They Give Each Other Diseases" on the Stallion Alert Muxtape.
Posted by Wockenfuss at 11:51 PM

Oh.My.God. You have a copy of this? Dude! Is there any way you can send me the mp3s to my email address? I know, I'm a pest. You live in Portland, eh? I'm planning a trip next year out there with the family.

Anyway, hope you write me back. jesse.trent@gmail.com