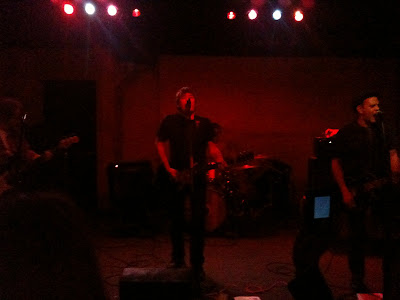 Best Kissers in the World were a band that had come and gone. I had accepted that. I never saw them in the 90's, and I missed my chance. This upset me, because I love the band's music, and it wasn't even like I got into them too late. I bought their first Sub Pop EP and loved the shit out of it. Still: never got to see them live, and the idea of a Best Kissers reunion seemed highly unlikely.

Well, dreams do come true, my friends. The band is back together, and I was lucky enough to see their very first reunion set at Slabtown on Friday night. They didn't go on until almost 1:30, playing last on a four-band bill, and it made for a long evening as the wife and I got there around 9:30 because we wanted to see the opening band (Stan McMahon Band playing as a rare power trio). Of course, they didn't go on until 10:30, and then we had to sit through two other bands who weren't really our thing. (Stan was awesome as usual.)

So, yes, it was late by the time the Kissers finally took the stage. I'm not gonna lie: there weren't a ton of people there. But the people who stuck around were there to see the band, and they knew it. The group seemed really excited to be there, and the show did not disappoint. In fact, it was better than I thought it would be, and I was planning on it being really good.

Best Kissers always had a rotating lineup of band members, with Gerald Collier being the only one who was always there. Still, it's worth mentioning that this incarnation of the band does not have any original members except Gerald. While I usually poo-poo things like this, I don't really care in this situation. (To be honest, I never really knew who any of the dudes in the band were except for Gerald, with the exception of Danny Bland, but that's just because he used to be connected to the Supersuckers.) Here's an explanation I found online from the new bass player:

It's a new Portland-based lineup. Gerald got permission from previous members (now spread about the country with families, careers, etc.) to put it back together with local friends. Lineup is:

Mark is a Portland boy who has been playing in original bands in PDX for 20+ years. Kevin and I played in a band called Capsule based in San Francisco in the '90s and we were also the original rhythm section for the Mother Truckers, who are alive and well in Austin.

Anybody who follows the band knows that there have been quite a few players over the years and that Gerald is the only constant, but we are all big fans and we love playing together (Kev and I have been playing together for 15+ years), so we are stoked to be playing with Gerald, especially songs we've enjoyed from the outside over the years and the potential we see in future writing.

It's all about rock and roll. If that's cheezy then I'm cheezy. We love to play and we're playing what we love, and that is the extent of the game plan at this point!

So far we have Slabtown on May 21, Tractor Tavern in Seattle on July 30, and Dante's on July 31 with a few other unconfirmed dates we're working on.

So, that's the deal with that. The guitar player could have fooled me. Dude was a beast, and had the solos down, note-for-note. And the rest of the band sounded great, as well. There were a few hiccups here and there, but they were minor. For a first show, it was fantastic.

Because I am a nerd, I kept track of the setlist. Here it is.

Not sure about those new ones.

That's the best picture I got up there, because my phone has no flash. Better one here that's not mine, and more on BKITW's FB page.

They're playing again in July. I'll be there.
Posted by Wockenfuss at 1:42 AM