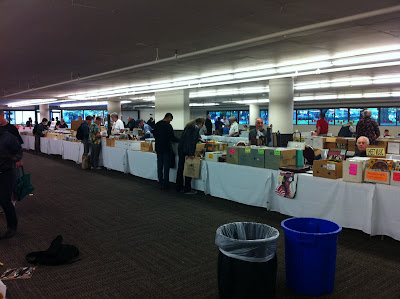 This picture makes the show look more sparsely attended than it actually was, but the reality of the situation wasn't far from what's represented here.

I don't know if they just did a bad job of advertising this thing, or if everyone's holding out for the always-reliable Night Owl show later this month or what, but this event wasn't the rager that I thought it might be. Of course, now I'm wondering if the Night Owl show just seems nutso-busy every time because the room they hold it in is so damn tiny. All the same dealers that are at that show were at this one, but the room was like eight times as big. Honestly, that was probably it. Because there were people at this show. Just not a ton.

It was the first time I'd ever seen dealers packing their shit up four hours before the show was supposed to close. Like they had anywhere else to be at 2PM on a Sunday... (I kid, vinyl vendors, I kid.) Anyway, that's all a bummer for the organizers and the dealers, but for me, it meant less wedging in between fat dudes, and more time to browse LPs without feeling like someone was looking over my shoulder, waiting for me to move along. I stayed for about three and a half hours (I really had nowhere else to be), and by the end of the day, I had a solid haul in my record-carrying satchel.

Want to know what I got? Of course you might. So here's the breakdown:

Beck - "Cellphone's Dead" b/w "O Menina": The only 7" I picked up at the show, and it's a good one. The cover is basically a replica of the one from The Information, with a full sheet of stickers tucked inside, along with an inner sleeve that matches the outside one. Extravagant for a 7". And only five bucks.

Bongwater - Double Bummer: Aptly-named double LP from a band that I like most of the time. This is their first full-length, and it is over-the-top wacky. There is a time and a place for Bongwater, and it used to be when I was really, really high. Not sure when it will be now.

Heatmiser - Cop and Speeder: I had been meaning to buy this for about ten years, so I was happy to find it used, and on blue vinyl no less. It is not rare by any means, but I knew it existed on colored vinyl and just wanted to make sure I scored that version. I did. So that's something.

Pavement - Brighten the Corners: Finding original issues of Pavement LPs anywhere other than eBay (in Portland, especially) is damn-near impossible, so spotting this one in the wild was a rare treat for me. Lyric sheet intact, cover and LP in great shape - boom. Still need to decide if I want to buy the deluxe edition on vinyl. I bet I will at some point.

Pavement - Quarantine the Past (Record Store Day Version): This one includes a great story about record-collectin' nerds looking out for each other.

The last time I saw my pal Robi was on Record Store Day back in April. It happened to fall on the same day as the last Night Owl record show, which is where I saw him. We ended up leaving at the same time, and while we were heading to our cars, I was bitching about how I slept in, thus missing my chance to pick up the limited-edition version of Pavement's newest greatest hits comp, which featured not only different artwork, but a completely different (and better, if you ask me) tracklisting. It was completely my fault: I slept way late, hit the stores anyway, but knew I'd come up short. And I did. After checking the eBay prices over the next week or two, I was really pissed at myself.

I ran into Robi at this show, and he told me that he found a copy not long after I saw him last - in a store and for retail price, mind you - and that he had it in his car. Did I still want it? Yes I did. And never have I been so glad that I put off buying something on eBay. It even still had the download card in it. Boom. Robi, you understand how this vinyl-collecting game works. And I respect the shit out of you for that. Thanks again.

Unwound - The Light at the End of the Tunnel is a Train 12": Late-ish EP-type thing from a band that I should have loved a lot more a long time ago. It's never too late. My Unwound collection grows more decent by the year.

Method Man & Redman - Blackout!: Been meaning to buy this one on wax for a while now, but kept waiting to just find it used when I least expected it. It finally happened.

Method Man - Tical 2000: Judgement Day: Same deal with this one. Can you believe this is the only Method Man solo joint that I have on vinyl? Shame on me for not having a copy of Tical on my shelf. (Though I do have it on both CD and cassette.)

Nirvana - "Lithium" 12": German 12" single from 1992, in such beautiful shape that I want to cry. I am really excited about this one. NOT the picture disc version. Just the straight-up maxi-single with the picture sleeve.

Del tha Funkee Homosapien - I Wish My Brother George Was Here: Thought this was an original issue, but closer inspection revealed it to be a mid-2000's reissue. For the price I paid, I'm fine with that. And it came with a poster. I used to have this cassette, but lost it a long time ago. Happy to have it again.

Steel Pole Bath Tub - Tulip: Original insert intact. This is one of the SPBT albums that I've spent very little time with, and I'm looking forward to changing that. Let's get noisy.

Cat Power - Jukebox: I don't know if it's because of the fancy-ass packaging or what (gatefold, really thick vinyl, silver sheen), but this record retails for around 30 bucks, and I just never wanted to pay that much for an album of covers. Finally found it used and in decent shape. Holding out for a few years can eventually pay off. Every once in a while.

Sunz of Man - The Last Shall Be First: Not sure how rare this one is, but I've definitely never seen it before. It was filed in with a couple of Killarmy records that I know almost regret not buying, but I've always been more of a fan of this group. Original insert, and the whole thing is in great shape.

Wu-Tang Killa Bees - The Swarm: Another great random Wu find. Either this one is missing the insert or it's just a victim of really shoddy packaging, because there is no info about who performs on what song - not on the back, and not even on the LPs. Thankfully, it's already in my iTunes.

Not a bad group, eh? As usual, there were a bunch of Melvins records that I had to pass up because of their $50-$75 price tags, but I'm used to that at this point. Looking forward to seeing all the same dealers in a few weeks at the Night Owl show. Better start saving.
Posted by Wockenfuss at 10:23 PM

Sounds like a sweet night. Tussin, what a stallion. It always pays to have a couple super bros. That Unwound 12" caught me off guard when it came out. It was the first sign that they were going from straight up noise/stallioness to a more reserved sort of experimental thing (it came out in between "Repetition" and "Challenge..."). I still dig it, although the title track is tedious and unlike anything else they ever did. Ironically, "Mile Me Deaf," which was only ever released on this single, might be my favorite song of theirs ever. And that is saying something. "Tulip" is my favorite SPBT album, hands down. I used to be mad obsessed with that album and it was constantly on my top 10 all-time list. "Soul Cannon," "Merchurochrome," and "Pause" will change your life. You bought me that Sunz of Man album for Christmas, on vinyl, way back in '98. It sounds incredible. You totally should have picked up the Killarmy records. They are worth owning and all of that old Wu-Tang label stuff is out of print. The Swarm compilation is awesome. Didn't even know it was on vinyl.