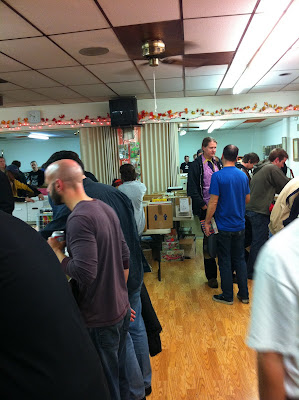 My brother was in town from Arizona, and though the Night Owl show was to be our main record-buying attraction for the day, we hit a handful of other stores around town during the afternoon to get ourselves warmed up. Think we started around noon and left the Night Owl show around 7. Almost a full workday of digging through stacks. By the time it was all over, our hands were dirty, our money was spent, and my car was weighed down with wax. And after that, we got to go downtown and see a fantastic rock show. But that's another post.

It was a rainy day (October in Portland, go figure), but it didn't get us down. Pre-Night Owl, we hit Exiled Records, Crossroads, CD/Game Exchange, and Jackpot! - all on Hawthorne. Exiled is one of my new favorite spots. It's small space, but they do a good job of keeping the crap to a minimum, so almost everything they stock is something of note. They've also got a nice bargain bin full of stuff that is a step up from just-get-this-out-of-here, and a fat collection of cheaply priced 7"s. Crossroads continues to be the best place in Portland to kill four hours and fifty bucks. You never know what you'll find. CD/Game Exchange is weak on vinyl but strong on CDs and DVDs, and Jackpot! is becoming more and more pointless as the years go by. For new vinyl, it's the place to go. Other than that: meh.

I was telling my brother before we went to the Night Owl show that I was glad he was here for the autumn edition. There's nothing stinkier. Between the rain-dampened clothes, the musty aroma of old LPs, the general lack of hygiene from record collectors/vendors, and the fact that they sell fried food and booze in the venue, it's an olfactory smorgasbord like no other. The show, as usual, was crowded, loud, and a bit overwhelming. But we had fun, and I plan to keep going back as long as they keep putting them on.

Want to hear about my haul for the day? The list is long, and I'm just going to toss in all the stuff I picked up, though most of it was from the show. Here we go.

Hazel - Lucky Dog CD: This is the promo version for Hazel's Toreador of Love record. Apparently this was the original title. Nothing different about the record, except that track one is listed as "Where Are the Babies?," and on the eventual release it wasn't listed as its own track, which, if I recall correctly, caused a discrepancy between the running order on the label and the songs on the CD. Found this at Jackpot! for a buck.

Beck/Sonic Youth - "Pay No Mind"/"Green Light" 7": This was the Record Store Day exclusive single that these two favorite-artists-of-mine put out last year, and I was always pissed I didn't get a copy that day. Got one now. Hearing Kim Gordon sing "Pay No Mind" seems straight out of some burrito-induced dream I would have.

House of Pain - "Shamrocks and Shenanigans" 7": This is such a weird one. Mostly because it's on the Sub Pop label. Well, I guess it's actually a split between Sub Pop and Tommy Boy. It's on green vinyl, and contains two different ass-rock remixes of "Shamrocks." Neither are very good, but I always wanted to have this in my collection, and now I do. Though the copy I have reeks like cheap cologne. Seriously.

Fugazi - 3 Songs 7": Yeah, somehow I didn't have this already. Fixed that.

Everlast - "I Got the Knack" 12": I don't know why I find Everlast's pre-House of Pain work so infatuating. Maybe it's because it's so bad. This single has a non-album cut called "Pay the Price." So that's something.

Big Daddy Kane - "Very Special" 12": It's rare that you see Kane records floating around, so you gotta buy 'em when you do. This one's for a track from the Looks Like a Job For... LP. Features an exclusive "Edit Without Female Rap." Now that's a new one.

Beck - "Loser" 12": Thought maybe the version of "Steal My Body Home" on the b-side of this would be different than the album version. Doesn't appear to be. Still happy to have found this.

Prince Paul - A Prince Among Thieves: Not the rarest record in the world, but definitely one that you don't see in bins too often. Found it for a good price, and it's a great album. Highly underrated.

Busdriver - "Avantcore" 12": Six-track single with some sweet remixes of the title track and two other album cuts. I will buy any Busdriver stuff I don't already own.

Naughty by Nature - 19 Naughty III: I can't believe it's taken me this long to get this damn thing on wax. Truly one of the greatest hip hop records of the 90's.

Urge Overkill - Jesus Urge Superstar: I went through a little UO phase about two months ago, and realized that this was one of two of their records that I don't own on vinyl (the other being Exit the Dragon). I set up a saved search on eBay, and was just waiting to find a cheap copy. Found this one at the record show with a $2 price tag on it, and while I was looking at it, the slightly tipsy dealer whose record it was told me I could just take it. And it's in great shape. Boom.

The Beatles - Introducing...The Beatles: The guy who sold this to me is a chap that I've purchased a bunch of records from at the shows over the last few years, so I chose to believe him when he told me it's not a bootleg. I hope he's right. The Beatles' first US offering, and I've been waiting for a decent copy. Found one.

The Doors - Strange Days: My Doors vinyl collection is sad, and it really shouldn't be. Working towards changing that. Found this first pressing for a solid price, and it's in great shape. Great album, too.

The Beatles - A Hard Day's Night: The U.S. version. Not the greatest copy, but it's an original and it's more an issue with the cover than the vinyl. So that's cool. I was in desperate need of this one.

3rd Bass - "The Gas Face"/"Wordz of Wizdom" 12": Still in the shrink. Features some remixes. Stoked to have found this one. The same guy had a copy of The Cactus Revisited but it was in shit shape. Shame.

Sonic Youth - Dirty: Original 2xLP copy. The cover's got a little bit of wear, but the guy cut me a deal for this one. Tough-to-find record, and I'm very happy to have it.

godheadSilo - The Scientific Supercake LP: I watched somebody in front of me pick this out of a crate at the last Night Owl, and I was bummed. This time around, I got my copy. Great shape, with original insert. Let's get loud.

fIREHOSE - if'n: Pretty sure this is a reissue, but I don't care. This is the one fIREHOSE record I don't know at all. Looking forward to changing that.

Happy Mondays - "Wrote for Luck" 12": This was in the bargain bin at Exiled. Three bucks. Best Happy Mondays song ever. Features remixes and a non-album b-side.

Urban Dance Squad - Mental Floss for the Globe: I was obsessed with this record when I was a teenager. It sounds dated now, but it's still fantastic. If you've never heard the Squad, it's not too late.

Oy, Longest blog post ever. Impressive haul though, eh?
Posted by Wockenfuss at 12:32 AM