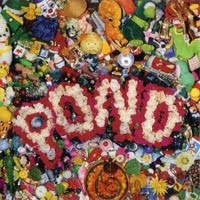 I should make a special section on this site for the albums that I own on CD, LP, and cassette. Usually when I get an album in vinyl, I'll sell the CD. But there are some - this being one of them - that I can't bring myself to part with. I want to be prepared to play them at all times, and there's usually some sentimentality involved, too. The first two Pond records would be in there, and so would some Faith No More records. The first Mr. Bungle, too. I'm sure there a few more that I'm forgetting at the moment. Anyway.

I don't clearly remember the first time I heard Pond. I always picture this record coming out in '91 or '92, because it feels like such a big part of my youth. Apparently I only had it during the last few years of high school. But I listened to it a ton. My friend had a copy of the CD that was always in his car, and we spent many an afternoon dicking around, driving while blaring this CD. It never got old. Ten songs that sounded almost like something you'd heard before, but mostly like nothing you'd ever come across.

Pond is remembered by people who don't really know what they're talking about as a "grunge" band, but I wouldn't call them that. Yeah, they rose to prominence in the NW in the early-to-mid 90's, and it's easy to slap that label on them to quickly reference their involvement in that scene, but "grunge" has dumbed-down connotations that I would never attach to Pond. Their music, even though it was never short on gristly, fuzzed-out tones, was deceptively intricate and fully reliant on melody over all else. Trying to compare the resulting sound to any other band is pointless, and in this case, that's a high compliment.

Pond was a three-piece band that sounded like a four-piece, thanks both to Charlie Campbell's dexterous fingers on the guitar, and Chris Brady's penchant for playing weird-ass semi-chords on his bass. (He would also use a bow sometimes.) And, of course, Dave Triebwasser pummeled the drums. That guy was the perfect drummer for this group. They all sound huge, but like I said, it's the precision that made it work. There were plenty of bands who tried to play loud, melodic rock, but Pond was just really fucking good at it.

The fact that Campbell and Brady's voices sound similar to the untrained ear made the whole thing even more interesting. Their harmonies were dead-on, and instead of their being a slight disconnect when one or the other took over the lead vocals (I always just assumed they sang the songs they wrote, and the vocal duties usually ended up being split down the middle - also cool) - like, say, on a Sebadoh record - you were never left with any sense that things had shifted. Tough to do, and a real testament to how well Campbell and Brady worked together.

So, yes, this is their debut, and though I bet the band considers this their finding-their-sound LP, it's full-blown awesomeness. (Quick aside - I went to see Pond in 1997, and someone yelled out "Agatha" - one of the singles from this record - and Brady made a comment about how they're "not that band anymore" and they did not play the song. Hence my assumption that they disowned this record at some point.) Trying to explain what Pond sounds like is difficult, so describing the exact merits of these songs is a little tough. They're heavy in a way, but also the sort of songs that I used to sing along to at the top of my lungs. I still can. They're catchy. And the lyrics are smart. And most of them have one-word titles like "Gone," "Wheel," "Grinned," and "Spots."

"Foamy" has always been one of my favorite tracks, especially after I found out it was about a likable prostitute. That remains one of the only songs on this record that I have any grasp of what it might be about. Although "Tree" may actually be about a tree.

If you don't own this record, you should. You can probably - sadly - find it for a dollar somewhere. I could go on forever about it. And wait until we get to their next record. I won't be able to shut up about it.

Crazy. I also own this on CD/vinyl/cassette. I will try to save most of my Pond hyperbole for the next album. I'll try.

For me, there is nothing more NW than Pond. People that I love and respect from the NW worship at the alter of Pond. People that didn't grow up there in that time have no idea who they are. Which is sad. Because to me they are gods. Damn, there is that hyperbole.

I bought this cassette in '93 off the strength of their Bohemia video for "Agatha" and a cover story in Paperback Jukebox that I probably read like 15 times. I listened to this album way too much after buying it and, like you, can still not place much significance in the song meanings. Although I will try. 17 years of study have lead to these conclusions. Let's get obsessive/nerdy.

"Young Splendor"- No idea.
"Perfect Four"- This seems to be about Brady collecting rocks, a theme he would obviously revisit, but one can't be sure. I have the official lyrics to this and they don't really help.
"Gone"- No idea.
"Agatha"- This is about an old house that Charlie lived in as a kid. I got this from the Paperback Jukebox article.
"Tree"- This seems to be Brady pondering the purpose of existence.
"Wheel"- Seems to be about some homeless people that Campbell chatted up. This is my take.
"Spots"- I am pretty sure that this is about Brady being a kid and staring at the Sun. I could be crazy. I would kill for official lyrics to this. Kill!
"Foamy"- You already nailed it.
"Grinned"- I think this is about a winter day in a park that Brady shared with his lady love.
"Filler"- I have no idea. Although I read that the band wrote and recorded this on the spot since they had extra recording time, Black Sabbath-style. Which is why it is called "Filler." Which is nuts because this song is insane.

Part 2 of my nerdy comments will appear above.

This album is near NW perfection from beginning to end, and captures the sound of '92/'93 really well. As a youth, I loved the fact that they were from Portland, not Seattle, as it brought the whole "grunge" thing even closer to my doorstep (although I would never consider Pond a "grunge band).

Pretty much every song on this album is perfect, and at 10 songs, I always wished that it was longer. I would love to name favorites, but honestly pretty much every song on here is a favorite. This is probably a good place to note that this is one of the 3 albums I used to teach myself the drums (the other 2 being Fugazi's "Repeater" and NOFX's "White Trash"). I used to crank this up in my Walkman and then play along as best as I could. Obviously, many of my drum techniques to this day I have borrowed from Dave Triebwasser.

Did I mention that I was in the only Pond cover band ever? No? Because I was. But that comes later...

This is one of my all time favourite albums. I stumbled across it at a small music store, and fell in love with the cover.

Agatha, is my favourite track, and to find two people, not just one, who understand just how great these guys were is awesome.

I didn't have very many opportunities to see them live, as I was under the legal drinking age, and they didn't tour Canada that much.

However, seeing them perform in Seattle (I think) or thereabouts, during my road trip was amazing. Small venue, Jason from POTUSA rocking out to them in the crowd, and it was also my first introduction to Modest Mouse as they were an opener.

I love this album, and band, and if there were a reunion tour, I'd see em in a heartbeat.

Cheers, and thanks for bringing back some very fond memories.

i fucking love this band. I never listened to it when it was fresh off the press in the early nineties because i was an infant, but i love this cd now. some of the best fuzz ever. wish there was more.