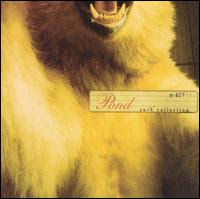 While most NW bands had already signed their major-label deals and been shit out the bottom of the industry by '97, Pond was bringing up the rear. I didn't know what to think when I heard they had signed with WORK (a now-defunct division of Sony), but I was just happy as shit they were going to put out another record. And considering how disparate their first two albums had been, I didn't know what to expect from the third.

I would take no satisfaction from shitting on Pond for making a weak album to satisfy the industry types, and thankfully I don't have to. Rock Collection is definitely their most "accessible" album, but it's by no means radio-ready, even if Sony thought it might be. Though Brady's songs here do portend the more mainstream-ish stuff he would go on to do with Audio Learning Center, they're not a large enough jump from his songs on their previous record to feel out of place or forced. He continues to write huge hooks, and they work throughout this record.

Campbell continues to be in the zone on this one, too. "My Dog Is An Astronaut, Though" and "You're Not A Seed" are some of the best songs he ever did with the band. And "Rebury Me" keeps his obsession with abstract structures going. "Twins" and "One Day in the Future" are two of his more straightforward songs ever, though they're both decidedly different in tone. His depression clearly hadn't subsided by this point, and the album's closer, "Ugly," is both beautiful and cringe-worthy.

The songs are divided up pretty evenly between the two dudes this time around, with Brady feeling like a much more commanding presence on this record than he did on the previous one. There are tinges of him trying to sound buzzworthy on "Spokes" and "Golden," but thankfully he reins it in before it gets too corny. And those are fine songs - don't get me wrong. The sticker on the front of the CD says "Featuring 'Spokes' and 'Scoliosis.'" "Spokes" was the first (and only) single, but I always felt "Scoliosis" was the catchier song. Not that that matters.

Brady really gets over with "Greyhound" and "Filterless," two songs that seem to go together, and are only separated on the album by "Rebury Me," which fits in well with them, too. They're all towards the end, and they make for a strong ramp-up to the end of this record. Overall, Brady sounds invigorated on this album. Maybe he had high hopes for the major-label situation...

Of course, it ended up being the undoing of the band. This would be their last album together, making for a solid ending to their way-too-short career. Still, I'm glad they got a little taste of the big time, even if it was bitter. And this record really is a fine one. It's another completely unique effort from them, and it's crazy to think that this was only four years removed from their debut.

I've been listening to this record a lot lately, and it holds up well. Pond, we hardly knew ye.

But if nothing else, we've got this surreal video to remember them by:

"Spokes"
Posted by Wockenfuss at 1:12 AM

Christ. Let's do this. By the time this came out I was heavily obsessed with Pond. By heavily, I mean that I was in a Pond cover band and had thoroughly over analyzed their "Practice" album much like Manson did "The White Album." I have a distinct memory of seeing Pond live a week before this album came out and getting a red promo cassette of "Spokes" and "Twins" and thinking that the band was really going for the major label thing. What an idiot I was. The song that I really remembered from that night was "Scoliosis," which lends credence to your theory that that was the radio jam.

I was leery that the band would alter its sound for Sony but other than the things that you mentioned, luckily that wasn't the case. This is a Pond album. And make no mistake about it. "Practice" was Charlie's and "Rock Collection" was Chris'. And that's not really a bad thing.

Before we really get going I should take this time to mention the genius of both Charlie and Chris' songwriting. I am sure that they borrowed the concept from someone else but Pond, both songwriters, had an affinity for ending a song with an entirely new part. Sometimes they followed a verse/chrous/verse/chorus/bridge format, where other times the ending would act as a 2nd bridge. To my knowledge, this is was a concept that was largely Pond's and something they utilizes incredibly effectively on all 3 albums. After studying their albums like gospel Fargo and I dubbed this technique the "Pond ending." That is, a "Pond ending" is where a song ends with a completely new part. I am convinced that it is the secret behind their genius and is a technique, although utilized on their previous albums, that really gets used effectively on "Rock Collection."

Should I break it down song by song? Yeah. I probably should.

"Spokes"- This was obviously Brady's stab at a radio. Or at least it always appeared that way to me. I used to oddly resent this song for that reason. In my adult years I have grown to love the shit out of this song. The Pond guitar trick is in full effect here. Have I mentioned that Chris Brady always wore his emotions on his sleeve? Because he did. The lyrics border on corny but never quite get there. The 3rd verse is especially awesome, lyric-wise. He is the Paul to Charlie's John. And he hits gnarly high notes in this song.

"You're Not An Astronaut"- This song, both conceptually and musically, are simply untouchable. I love that Brady does the background vocals. I remember seeing them play this live and watching Fargo drool at the guitar parts. In case it hasn't been clearly stated before, Charlie Campbell is a guitar hero. Not in an Eddie Van Halen kind of way but in a Justin Trosper kind of way. He has no business being this good. This song has a sweet, "lies in my bed," Pond ending. The first of many.

"Scoliosis"- This seemed to be the obvious jam, although the progression of the song always seemed to be contrived to me. The chorus is a beast, though. Charlie Campbell shows how to perfectly complement Brady's bass-chords on this one, something which was obviously lacking with Audio Learning Center. Live, Charlie always seemed to prefer to play guitar to Chris' songs than play and sing his own. How annoying/awesome.

"One Day In The Future"- I have a hilarious memory of seeing Pond play this live where Charlie quit the song midway through. He simply didn't want to finish it. Which seemed to prove to me that he was the legitimate shy type. I think he honestly didn't enjoy playing live, which is sad because he is god. And I mean that.

"Twins"- Speaking of god, I am pretty sure that god had a hand in writing this song. I love that Campbell and Brady share vocal duties, something which they rarely did, although this song, judging from the lyrics, is obviously Charlie's. This song possesses an insane 2-part Pond ending that still gives me chills when I hear it. The whole "we are closer than you know" bit is just extraordinary. I used to rewind the cassette over and over just to hear the ending.

"You're Not A Seed"- I don't why but this song is perfect. The lyrics, the tune, everything is just perfect. Once again, I love that Campbell and Brady share the vocals, although I am 99% convinced that this is a Campbell tune. Yet another Pond ending that makes you want to rewind it and listen to it again.

"Flawed"- I remember that people used to front on this song but I never got it. This song is awesome. Brady weaves lyrics concerning love and knots together in a really creative way, and the actual song itself is mad catchy, complete with a sweet breakdown and, you guessed it, a gnarly Pond ending that makes the whole thing.

"My Dog Is An Astronaut, Though"- Holy crap. If you haven't heard this song then your life must be horrible. This is pure Campbell, as he writes what seems to be a 7 part song to empathize with the first Russian dog in space. The whole thing is like Pond ending after another. Fargo and I used to cover this. This song should be as big as "Stairway." Charlie Campbell should be a millionaire. Sadly, the world is unjust.

"Forget"- For me, this is a lost Pond gem. This is Chris Brady basically ruminating on his childhood and perusing through old photo albums. This concept would be corny for other songwriters but Brady handles it just right. This has always been one of my favorite songs on this record, especially when I'm feeling wistful. The Pond ending on this one is gigantic and really makes the whole song. Once again, Campbell's guitar accompaniment to Brady's bass chords is perfect.

"Golden"- I don't know why, but this song has never fully done it for me. Don't get me wrong. It's great. It just seems by the numbers compared to the rest of the output here.

"Greyhound"- Words can't describe how awesome this song is. If you don't love this song then you and I can't be friends. This is like Brady's companion to Campbell's "Ol' Blue Hair," an insane song about a chance encounter with a bar hag. The intro is perfect. The lyrics are perfect. Campbell's guitar makes you want to weep. And there is a bizarre, instrumental only Pond ending on this one. I drank Greyhounds in bars for years because it was always the first drink that popped into my mind. True story.

"Rebury Me"- Campbell's ode to wanting to be stuffed back into the womb. Awesome.

"Filterless"- People seem to really hum on this song's nuts which is funny because it is one of the only songs on this album that doesn't totally and wholly do it for me. That being said, it is still a pretty awesome song with a pretty rad Pond ending.

"Ugly"- Oh Charlie. Let me hug you. And set you up with my good looking girlfriend. I'll always think of this song when I think of Fargo telling me about how he accosted Charlie once at Powell's. Charlie was apparently really embarrassed to have Fargo fawning all over him. Which is odd because Campbell is god.

Oh, Pond. You should all be millionaires.

Listen to a podcast review of Pond's Rock Collection on the Dig Me Out Podcast at digmeoutpodcast.com, a weekly podcast dedicated to revisiting lost, forgotten and overlooked rock of the 1990s.