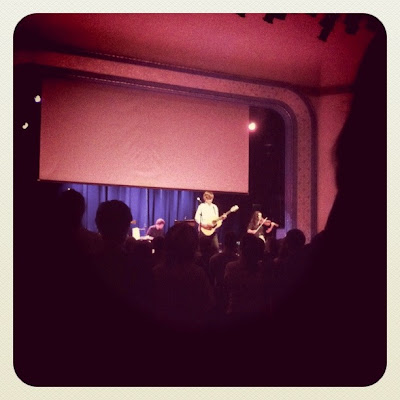 I never win anything.

It's not I like I enter a ton of contests, but I don't usually win the ones I do enter. So, when I signed up for a Facebook-advertised Music Millennium email drawing to win two tickets to the upcoming Thurston Moore show, I completely forgot about it ten minutes after I submitted my name. When I heard back from them a few days later, I was surprised. And happy. They told me I had won the tickets, and that I could come pick them up whenever.

I really wanted to go to this show, but springing for admission wasn't really in the budget this month, so the on-the-house tix certainly hit the spot. My wife was out of town (and she's neither an SY or Thurston solo fan - at all), so I called up my man Nate and we hit the show.

We missed the opening band, but the middle, pre-Thurston act was Kurt Vile, who I've heard a little bit of online. Didn't really think it was going to be my sort of thing, and it wasn't. Not bad at all, just not the sort of stuff I would get into. Acoustic/electric mix, sort of psych-folk-y, and static vocals that never really moved. A lot of people seemed like they were there to see him, though, so somebody's clearly digging it.

Thurston came out after a short break, and had the venue pull down their big-ass movie screen. He was on acoustic guitar, and was joined by another dude on acoustic, a guy on drums, a girl on a full-size harp (!), and a girl on violin. This is more or less the setup he used during the recording of his most recent album, Demolished Thoughts, and it confirmed what I had suspected going into the evening: this was going to be a set heavy on the new stuff.

And it was, but not exclusively. I think he may have played every song from Demolished Thoughts, but he also worked "Frozen GTR" and "Fri/End" from 2007's Trees Outside the Academy into the set, which was cool.

But, this was really about his new record, and the songs came across great live. The production on the record threw me off at first, but the more I've listened to it, the more I'm starting to really enjoy it, even though the rough edges I've come to expect from Thurston aren't there. He wrenched out a few semi-extended jam-hammers at this gig, but the only feedback was unintentional. The band sounded great, and though there was one minor technical issue that stopped "Frozen GTR" mid-song, the rest of the night played out as well-rehearsed and spot-on. (Even if Thurston did have lyric sheets in front of him on a stand.)

Thurston started the show by reading a poem (that I've since discovered is included in the liner notes of the new record), and then the band kicked in. After a few songs, he turned on the projector in front of him and played this trippy black-and-white movie that featured girls dancing around and playing a record with a knife. That played for the rest of the show, and it was appropriate accompaniment for the music.

At one point he said, "I asked the venue to turn off the air conditioning and seal all the windows," which was a sweet dig on how unbearably balmy it was in there. I was doing some serious sweating. He also mentioned, as he was trying to figure out which guitars he had on stage with him were which, that the whole "alternate tuning" thing sometimes give him "night terrors." Which made me laugh.

The encore went to throwback mode, which everyone was excited about, including me. They played two songs from 1995's Psychic Hearts: "Queen Bee and Her Pals" and the title track, which Thurston clearly had to read the lyrics for, but it was badass regardless.

I've been listening to Demolished Thoughts online for the past month or so, but at the show I picked up the sweet-ass 2-LP, gatefold, thick vinyl version that not only has artwork exclusive to the LP version, but also comes with the CD booklet. Dude knows how to release his shit on vinyl.

Also: I apparently bumped into Kim Gordon in the lobby, but didn't see her. My pal told me this. I'm an oblivious idiot. Also also: Malkmus was in the house, making the scene.

Sorry this is somewhat scattered. I'm out of practice.
Posted by Wockenfuss at 2:48 AM