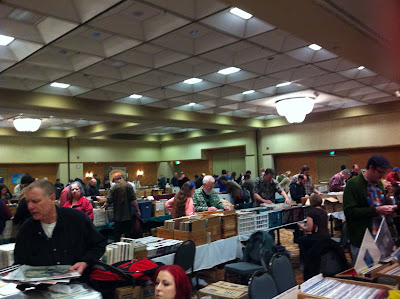 One new thing they had at the Convention this year was a dude standing next to the entrance, armed with a mic plugged into a guitar amp. If you were looking for something in particular, you could go up, tell him what you were looking for, and he'd hop on the makeshift PA and put the word out. If a dealer had what you wanted, they'd raise their hand (or start jumping around like a five-year-old because they're all incredibly socially awkward) and you could go over and take a look.

At one point the guy got on the mic and said "We're looking for anything by the Black Eyed Peas. Does anyone have any Black Eyed Peas records?" I didn't follow up, but I'm assuming the person who was asking got beaten severely and left for dead under a pile of VG- Neil Sedaka LPs.

Here's the rest of the stuff I picked up: 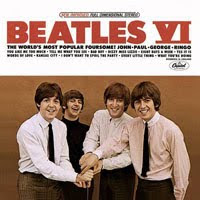 I'm slowly working toward getting sweet copies of all The Beatles' LPs, and this was another step in getting that taken care of. I've kind of been going in order starting at the beginning, and chronologically I should have picked up The Beatles' Story next (we're talking American chronology here), but I couldn't pass up this one. It's mono, an original press, and other than some slight splitting on the seam, it's in incredible shape. Best of all, the price was incredibly reasonable. In fact, judging from recent completed eBay auctions, I got a really great deal on this. Very excited. Capitol rainbow label, and it has the "(See label for correct playing order)" print on the back, which I think means something good. 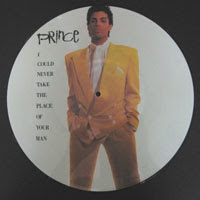 I've already got the standard 12" version of this, as well as the original 7" (which I bought when it came out in '87 - yeah, that's right), but it's one of my all-time favorite Prince songs, so I couldn't pass up the picture disc. There didn't end up being anything on here that I didn't already have - it includes the album version of the title track, and an "Edit" and "Extended Remix" of "Hot Thing," which are both on the regular 12" - but I'd never seen this in a non-eBay setting, so I knew I'd regret it if I didn't get it. I felt like it was a little bit overpriced, but it wasn't ridiculous. And my wife loves it, which doesn't hurt. Prince is one thing we can both agree on when it comes to music. 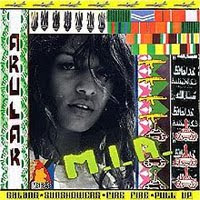 Speaking of music that both the wife and I can agree on... This was one of those I've-been-listening-to-a-"free"-version-of-this-for-years-and-now-it's-time-for-me-to-buy-it sort of situations, though it's not like she's seeing any of the money from it, so I'm still not sure I did the right thing. Either way, I've got her other two records on wax, so it was time to complete the trifecta. And complete it I did. Got this double LP for a really nice price, and it ended up being a solid surprise. Not really the sort of record you can count on finding at an event like that. 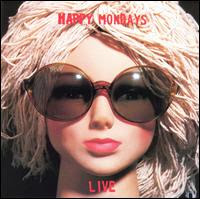 I never would have sought this record out online or made any serious effort to get it, but when I saw it for six bucks on the table of a dude who mostly sells classic rock stuff, I was both surprised and left with no option but to buy the shit out of it. 75 minutes of the Mondays, live in 1991, on a gatefold double LP, and the last track is an insane, rambling, 12-minute take on "Wrote for Luck." I'm feeling good about this one. Am I going to listen to it on repeat for the next two weeks? Probably not. But there will be a time and a place for this record, and when I find it it will get some serious play. If that makes sense. 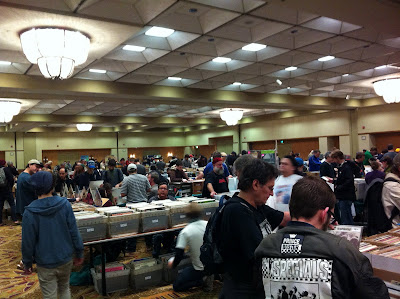 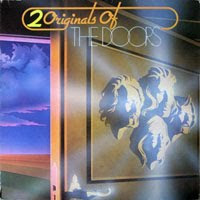 How wild is this thing? Such a weird record. This is a double LP, released in Germany, that contains The Doors' first two studio records - their self-titled debut and Strange Days. It's a gatefold, and when you open it up, the inside art is just the cover of those two records. (You can see some pictures on Discogs here.) Did I buy this solely for aesthetic purposes? Yes I did. Is that album cover one of the coolest things I've seen in a long time? Absolutely. So, I had to get it. Apparently there is a small series of these things, and they all have sweet artwork like this. Check out the Mothers of Invention one. I would like to have that. 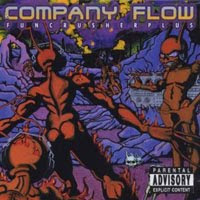 I'm more in touch with El-P's solo stuff than I am with Company Flow (I somehow missed that boat when it came sailing through - I must have been dicking around to OK Computer), but I've been meaning to remedy that, so when I saw this I figured I should give it a go. It's a 2009 repress, but I don't think it's any different than the original. In fact, it ended up being even better, because the download card was still inside of it, and apparently no one had used it, because I got all sorts of redemptive on that thing. And that's a good feeling. In fact, the downloadable version even came with some extra songs. Whaddya thing about that, society? 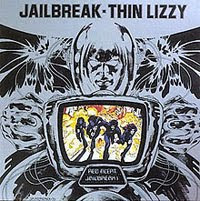 I'm only an occasional Thin Lizzy listener, but when I'm in the mood for it, it's nice to have around. Not sure why I never bought a copy of this before, though it might be because you don't really see them all that often, and it's not like I'm looking to shell out 30 bucks for some thick-vinyled reissue. It's all real-deal, baby. This is the record that has "Cowboy Song" on it, which I've been listening to the Supersuckers play for over a decade. It's been kind of nice to hear the original version. It's much more nuanced. Plus, this record has one of the sweetest covers ever. Apparently there's a die-cut version where the gray-and-black stuff opens up to reveal more of the color drawing or something, but mine ain't that one. That would be cool to have, but I think I'll live.

So, that's it for the records. I also picked up a three-song Steel Pole Bath Tub VHS that I have yet to watch, along with three 90's-era Supersuckers bootleg DVDs that have been consuming my late nights for the past three days. They are grainy, shaky, and completely fascinating. I'm going to get back to them right now.
Posted by Wockenfuss at 11:46 PM