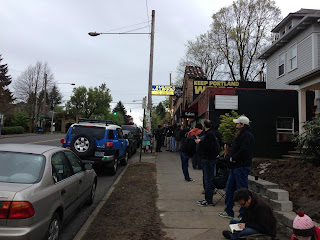 I missed out on Record Store Day last year because I was traveling for work, but this year my work decided to not send me back down to that annual conference, which was a good thing because I could participate in RSD, but a bad thing because it means I can't make my annual sojourn to Amoeba. Yes, I've got real problems.

The RSD list this year didn't contain anything I'd die if I didn't get, but there were definitely some items I really wanted, so I decided to get to Music Millennium early. The store was opening at 8, and I was planning to meet up with some friends to wait in line together, but they are lunatics and decided to get there at 3:30AM and that seemed a little nuts. so I nixed that plan, rolled solo, and got there at 6AM. The picture above shows how many people were in front of me. Apparently the girl who was first in line set up shop at 11PM the morning before. So, she got there seven hours before I did and I was only about 30 people behind her.

And, really, the line didn't grow too fast behind me until after 7, when things got nuts: 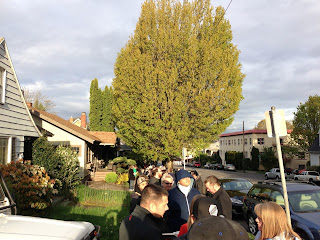 I didn't go too nuts, and I didn't go anywhere after Music Millennium because I didn't want to spend any more money. Well, I wanted to, but I shouldn't have, so I didn't. It's called being an adult, people. Look into it.

Here's what I picked up after waiting in line listening to Sklarbro Country for two hours: 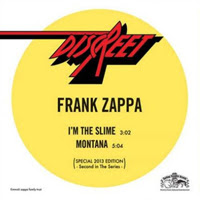 I'm guessing this is an homage to an old, existing single, but I can't find any info about it and I'm not really looking that hard. This has single edits of "I'm the Slime" and "Montana" and is on vinyl that I think is supposed to look like green slime. It also says "second in the series" on the front, and I can't figure out what the first was. 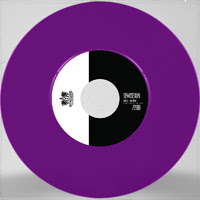 Purple vinyl, clear plastic envelope sleeve - very Prince. That image makes it look like it's opaque wax but it's actually clear purple, which is just as good. These two songs are about how he is a huge wuss or something. I got #72/2000. 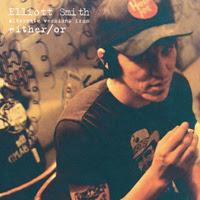 I probably have all four of these songs on bootlegs, but the versions here are from the source, so they're much nicer. And, they're not all just alternate takes - they're actually very different versions of some of his more well-known tracks. Except for "Angeles." That one's mostly the same. Yellow vinyl. 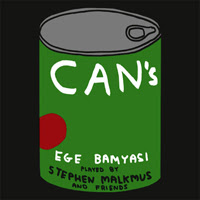 This was the only record I was going to get pissy about if I didn't get, and they had plenty of copies so it wasn't an issue. I'm not going to sit here and act like I've ever spent any real time listening to Can, because I haven't. Always felt like I should, but I haven't. But I listened to this record (which is a live recording of SM and friends playing the entire album, not in order) last night and really liked it. So maybe that will lead to me listening to Can more. But probably not. Clear green vinyl. 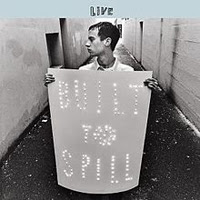 This 2xLP has been out of print for a decade, and OG copies routinely sell for $100 on eBay. I've got a decent collection of original-press BTS vinyl, so my plan with this one was to let this new reissue soften the price of original copies on eBay, so I could get one of those. Then I found out that this one is limited to 2,500 copies, which might not make that much of a difference, and it was only 20 bucks... I don't know. I just bought it. Still feel good about it. But there's still a chance that at some point I'll want the Up version.


And that was all I bought that was RSD exclusive. Here's some other stuff I bought, though: 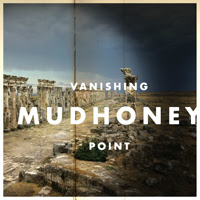 New Mudhoney! Of course I just realized that there was a "Loser Edition" on smoke-colored vinyl that you could get by pre-ordering this, and I didn't do that, so mine is the standard black-vinyl edition. And I'm going to have to live with that. Haven't listened to this yet. But I'm excited to. 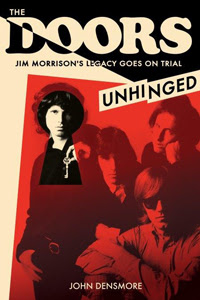 Music Millennium had a deal where if you buy a hardcover copy of Densmore's new book, you get guaranteed admission to the signing he's doing there next month. I'd be buying this book anyway - surprisingly, Densmore's previous book about the band is probably my favorite one, and there are many - and I'm not gonna lie: I'm kind of excited to meet the guy. So I'm going to do that. And I'm already 20 pages into this thing.

That's awesome. You are going to piss yourself when you meet Densmore. Let me know how the book is. The cover makes it sound as if he is going to be dropping "truth bombs."