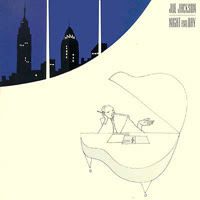 I bought this record because "Steppin' Out" is one of the greatest pure pop songs in the history of music. I expected the rest of the record to be good, but not this good–it ended up over-impressing me with how deep and diverse it is.

Joe Jackson is one of those rare artists that should, by any and all rational means, be as popular as an Elvis Costello or a David Byrne. However, he's always managed (at least in the U.S.) to stay one tier below guys like that. It's not for a lack of great songs. While he'll eternally be linked with the bland "Is She Really Going Out With Him?", there are non-single tracks on this LP ("Target" comes to mind) that run circles around the saccharine lumps in that radio staple.

Keeping in mind that I have a fairly uninformed opinion of the man's entire career, Jackson strikes me as one of those guys who is maybe too good a musician to really do the pop thing justice. Even the slicker pop numbers on this record (like "Breaking Us In Two") are sprinkled with tricky percussion and lots of little hits and intricacies, and often take left turns to allow for dense solos that are, while really great, unexpected when taken in context with the catchiness of the melodies.

I was listening to "Steppin' Out" a few weeks ago, and my wife made some comment about Jackson not being much of a singer. I had never really thought about that, but maybe his voice is a little off-putting. I've always found it sort of shaky and charming, adding a strange nervousness to the music. I guess that might not be a good thing...

Either way, this record is another one of those bargain bin scores that you shouldn't pass up. If you've got a turntable, you can easily find a copy of this on vinyl for a few bucks. Love it for "Steppin' Out," hold onto it for the other eight terrific songs.

My introduction to Joe Jackson was some strange live special of his that I watched on PBS late night when I was 18. What was strange was that as I recall there was no audience. It was just his band in a room. Not a month later I saw an old SNL rerun where they played "Steppin' Out" and I took it as a sign. I went down to Groovacious Platters the very next day and bought this record. I, like you, was shocked by how much I liked the rest of it. While none of the other tunes sound remotely like the aforementioned tune they are all pretty solid in their own right. Joe Jackson is really one of my guilty pleasures/addictions as I don't really listen to other stuff like him (I kind of hate Elvis Costello and I don't understand The Talking Heads. I know, right?) but I have found myself slowly buying his whole catalog over the years. "Another World," "Target," and "Breaking Us In Two" are all great songs. "Steppin' Out" might possibly be the greatest song ever written. I actually mean that. "Real Men" caught me off guard when I finally listened to the lyrics and is one of my favorite Jackson tunes. I also have memories of really blasting "A Slow Song" on my crappy stereo in my crappy apartment so that has to count for something. Some people prefer his earlier stuff but this album remains my favorite of his.

Oh, nice call on the legitimate musician doing pop thing. I read his autobiography and he basically majored in classical music in college (writing symphonies and shite) and only started doing pop as kind of a hobby. Which is the real bummer with Jackson because his pretentious leanings can really make him, as with this album, or really tear him apart, as with much of his late 80s and early 90s work.