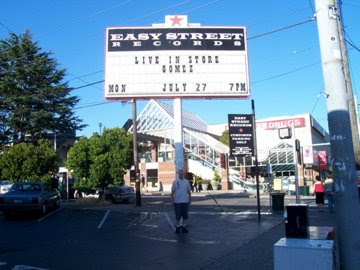 We rolled into Seattle right around rush hour, which was poor planning on our part. After fighting traffic downtown (Mapquest, you bastard), we made our way to Easy Street Records, and the doors to Valhalla opened for us. Right away, we knew we were going to be spending some serious time and serious dough here.

Easy Street has a ton of stuff, a ton of different sections, and is organized really well. While the layout makes browsing easy, the sheer volume of stuff was almost overwhelming. I think we may have spent almost two hours there, flipping through records and DVDs, and finally had to drag ourselves out so we'd have time for the rest of our planned stops.

I ended up walking out with a gang of LPs: A Deluxe Edition copy of Paris's The Devil Made Me Do It, Phife Dawg's Ventalation: Da LP, Hurricane's The Hurra, Busdriver's Jhelli Beam, and a limited edition version of Talking Heads' Speaking in Tongues that I had been looking for a decent copy of for years. I also picked up the Supersuckers Live at Helldorado DVD that I somehow didn't have. I think that was it, but I feel like there may have been more... Anyway, we needed to move on. 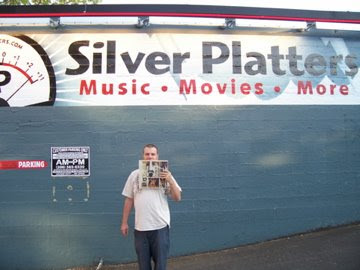 Silver Platters was like no other music store I'd been in before, and I'm still trying to figure out if that was a good thing or not. They have a ton of stuff, and though the concentration seems to be on music, they stock an insane amount of DVDs as well. Their vinyl is all very well organized, and everything is in plastic sleeves and priced quite fairly.

We weren't incredibly stoked on the place for one reason or another, but I ended up walking with sweet copy of The **** of The Mothers for ten bucks, which was a steal. In the shape that this copy was in, they could have easily charged 25. So that was nice. My brother enjoyed the vast selection of psych/cult DVDs and picked up some sort of reform school girls flick. All in all, not a bad spot, though it lacked the character of any of the other places we went to, so maybe that turned us off a bit. 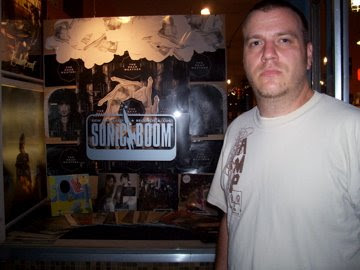 I had been to the Sonic Boom in Ballard when I went to the Supersuckers 20th Anniversary show (they played their in-store there), but I'd never been to the Capitol Hill one. If you've ever been to Jackpot Records in Portland, then you've got a good idea of what this place is like. Same sort of deal: indie-rock-centric with other shit they've deemed cool enough to be in there. That's fine by me, as it cuts out a lot of the crap that takes up space in other record stores. For them, it's probably practical, too, as they don't have a whole lotta space.

They have a nice selection of 7"s, though we didn't have the time to really examine all of them. I ended up walking with a sealed copy of Tad's 8-Way Santa (with the original cover, mind you) and maybe something else, but now I can't remember. We then hit Olympia Pizza next door because we were mad hungry. The pie was dope. 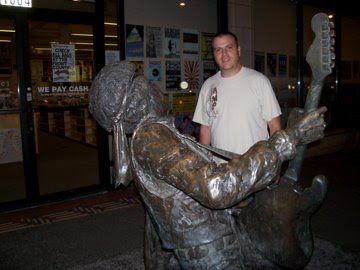 Yes, I've railed against EM in the past, but when in Rome, eh? By this time it was dark and we were starting to feel a bit ragged (and also starting to dread the three-hour drive home), but we powered on to our last stop. Capitol Hill must be hipster central, because the streets were teaming with skinny-jeaned dirtbags. We actually saw dudes playing fixed-gear bike polo. Seriously.

This EM is a lot like the ones in Portland (duh), but in sharp contrast, I actually walked out of this one with shit that I wanted. I picked up vinyl copies of RZA's Bobby Digital and Ice Cube's War & Peace Vol. 1, as well as 7"s from Peaches and Mudhoney/Jimmie Dale Gilmore. Oh, and a DVD of Heavy Metal Parking Lot. Not bad. We could have spent a lot more time in there, but it was after 10 at this point and we needed to hit the road. After watching the EM employees deal with a drunk transient and once we had sufficiently admired the sweet Hendrix statue outside the entrance (see photo), we decided to hit the road.

We got home at 1:30 in the AM, bringing the whole excursion to right about the 16 hour mark. I'd say about seven hours of that was spent in the car, so we can still say we put in a full work day of record shopping. Time well spent, and I can't wait to do it again.

I loved Easy Street Records. It was as record stores should be. They had plenty of used CDs, records and DVDs that were priced just low enough that I had a hard time saying no. Especially on this day I was getting frustrated by used prices (I refuse to pay 9.00 for a used CD) and Easy Street easily beat other stores. Most of the used CDs that I was after were 6.00 or 7.00 which is a perfect price if you ask me. They also had a healthy supply of 3.00 DVDs which I stocked up on as well as a wonderful 1.00 CD section that had some true gems in it. Looking back I almost wish that I had set aside all of my funds for this one store.

Silver Platters was my third favorite spot (after Easy Street and House Of Records) but at the time felt like a letdown after Easy Street. They had a confusing aesthetic going on with a sterile impersonal store but scuzzy hipster employees. I prefer my music stores on the dirty side so I found this a bit off-putting. However, their DVD selection was outstounding although I would have liked to have seen more used stuff and the prices come down a bit. Their cult DVD section was simply amazing and I salivated over every title. The only catch was that most were priced between 19.99 and 29.99 putting them directly out of my mind. I did walk out with "Reform School Girls" for 9.99 which made me extremely happy.

As for Sonic Boom I would have needed a few hours to peruse their 45s so maybe next time. The Everyday Music actually had a pretty nice selection of 45s and that is where I spent most of my time. I found their DVD selection pretty lacking though.