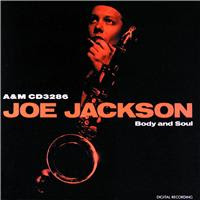 For only being a few short years removed from Night and Day, this album is stylistically miles away from the synth poppiness of his previous album. This is Jackson in jazzy, saucy-salsa mode, and while the results are pleasant, it's not really my cup of tea.

"You Can't Get What You Want (Till You Know What You Want)" reaches back to the pop well and goes from some radio-friendliness, but the horns and slap-bass sound terribly dated today. The song is catchy, but the lyrics go in circles and it seems like he's just trying too hard.

The other tracks aren't terrible, they just seem overcooked and over-thought. I actually find myself missing the synthesizers, which are replaced here by real instruments. That might be my problem. I've also only had this record for year or so, and I really haven't given it much of a chance. (I probably should have mentioned that in the beginning.) You can see what Jackson's going for, but you can't help but wonder if he saw this as his opportunity to indulge his studio fetishes.

His voice is still great, and when the grooves get going, they work. "Happy Ending" is a fun duet single, and it features some big harmonies. But the salsa swing of "Cha Cha Loco" and the drawn-out instrumental tinkering of "Loisaida" are hard for me to get with. But hey, the guy sounds like he's having a fine time, so that ain't a bad thing.

"Happy Ending"
Posted by Wockenfuss at 1:16 AM

This record is my least favorite of his early period works (he didn't make another proper album for five years). The sound is hollow, tinny and quiet, which is ironic as the liner notes go into great detail about the recording process used. Worse than that, most of the songs here feel forced and unfinished. "You Can't Get What You Want" and "Be My Number Two," as corny as it is, are really the only keepers here. The rest is meandering salsa-jazz that sounds like someone trying a bit too hard. When you are pictured on your album cover with a saxophone, an instrument you don't even play, trouble can only follow.