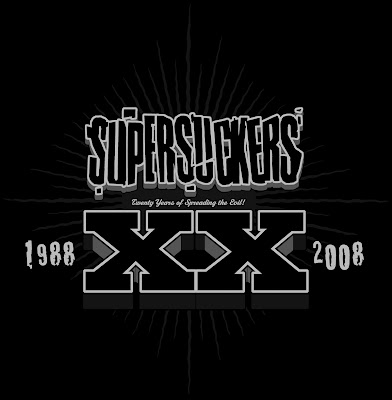 I first saw the Supersuckers in 1991, when they were opening for Gas Huffer at the Keizer Lions Hall, right outside of Salem. I was in high school, quickly becoming obsessed with the burgeoning NW rock scene, and as wide-eyed as they came. From the first time I heard the band blaze through all 35 seconds of "I Say Fuck," I was hooked. I went out and scooped up all the 7"s I could find by the group, and made a point to see them whenever and wherever I could. Songs like "Ron's Got the Cocaine" and "Retarded Bill" spoke to me in a way that I wasn't sure was right. But these four dudes reeked of rock, and I liked it.

What they didn't reek of was a band who would stay together for two decades, release countless records, and become an ongoing part of my life that is really only trumped at this point by immediate family and a few of my closest friends. I've been listening to the Supersuckers four times longer than I've known the girl I'm getting married to. In an era when bands break up routinely, this is a big deal. The Supersuckers are, for me, a constant.

So, when they announced they were doing a 20th anniversary show (they formed in Tucson in '88), I knew I had to be there. I asked the old lady to accompany me, she agreed, I got us a couple of tickets, and when the time came, we hit the road for the three hour drive to Seattle. We got there on Friday night (the day before the show) and at some point she mentioned that the band was doing a "signing" at a record store in town during the day on Saturday. I, being an idiot, had missed this post on their website. When we got to our hotel, I hopped on the ol' laptop and gave it a look. Sure enough, they were scheduled for an in-store at Sonic Boom records at 2:30 the day of the show.

We drove over to Market St. Saturday morning, dicked around for a while, and eventually saw the band's van and trailer pull up. The dudes in Sonic Boom set up their stage, and pretty soon, the Supersuckers were up and semi-rocking. 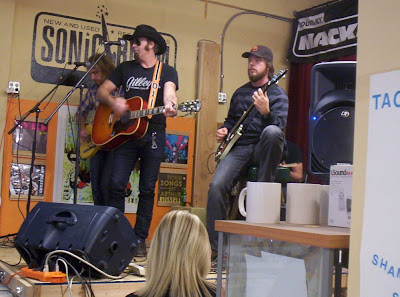 As you can see, they're utilizing a sort of stripped-down setup. Dan "The Steak" Bolton, usually guitar player stage left, was playing bass here while Eddie Spaghetti handled the acoustic. They did a few songs from the Must've Been High record ("Roamin' Round," "Roadworn and Weary"), "Good Livin'," "Creepy Jackalope Eye," "Born With A Tail," and "Breakin' Honey's Heart," which is from their new album. There may have been a few others. Pretty short set, but great to see them in a tiny little record store. There were probably about 40 other people there, so it wasn't too crowded. Eddie introduced his mom, who was standing right next to us. There were video cameras everywhere, too. Maybe we'll be on the next DVD.

After their set I picked up the Live in Orange County DVD/CD, planning to have the band sign it, but when I purchased it, they gave me a Get It Together poster, so I had the band sign that instead. Rontrose Heathman chatted with me briefly, and when I told him I was from Portland, he reminded me that they're playing a New Year's Eve show at Dante's. Yeah, I'll probably be going to that. I wanted to talk to Dan Bolton, Age 40, more than I got to. But he was really nice about signing my poster. Yup, when it comes to the Supersuckers, I am a fanboy. Eddie was drinking a Corona and talking with some folks, but he was happy to hear that I was coming to the show later that evening. Scott Churilla, the only guy in the group who's not an original member, had the pleasure of getting cornered on the sidewalk by me for his signature. He was cordial. Fanboy plan complete.

We made it to the Showbox a little before 8, and I'm glad we did. The show was sold out, and there was a line curling around the block of people waiting to get in. The doors hadn't opened yet. We got stuck next to to 22 year old fuckwads in line who wouldn't shut their holes about partying and giving the band drugs, you know, all that cool shit. I managed to keep my mouth shut. Anyway, we finally got let in a little after 8 and the show commenced shortly thereafter.

Gerald Collier, who you may remember from my Best Kissers in the World posts and the one about one of his solo records, opened the show. 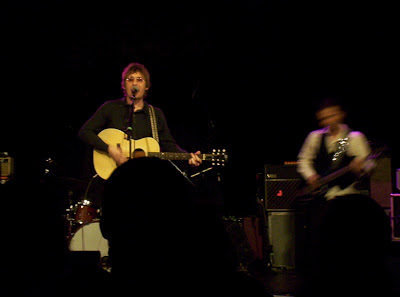 He made it clear when he came out that he wouldn't be playing for very long, and he didn't. But damn if he didn't make good use of his 20 minutes. He and his band ran through about five songs, they were all great, and his voice sounded fantastic under the high ceilings of the venue. And, much to my surprise, the notoriously rowdy Supersuckers fans weren't dicks about the slow songs he played. It was reassuring.

Next up was Zeke, a band that have a history with the Supersuckers, though I've never figured out why. I'd seen them once before, about eight years ago, opening for the Supersuckers at the Crystal Ballroom in Portland. They were terrible then, and they continue to be a suckfest today. 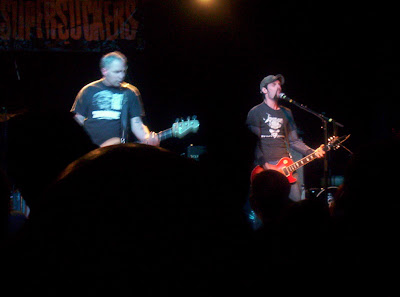 They came out, did their little thing where they insult the crowd, acted like they were doing the Supersuckers a favor by showing up, sped through a bunch of their shitty songs, and sounded every bit as pointless as they are. We get it guys: you're old and you suck.

Mudhoney had been originally scheduled to perform at the show, but at some point the slot had changed to feature Green River. An odd reunion to say the least, but a wise one. The crowd was freaking out when they took the stage. 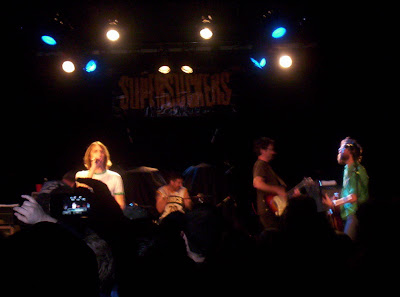 (This picture sucks, but it was the best I could do while I was getting knocked into by countless dudes.) I expected them to be shaky at best, but they were dialed in. It was weird to see Mark Arm sans guitar, but clearly, he knows how to handle himself. Seeing a couple of the Pearl Jam dudes onstage with a couple of the Mudhoney dudes would have scarred me for life in '93, but in this capacity it was somehow really fun to watch. They put on a great show, and between my internal fits of 90's (80's really, in their case) nostalgia, I realized I was seeing one of the best live sets I'd seen in years. I'm still a sucker for "grunge," if that's what we have to call it.

Not much banter, but Mark Arm made light of the Supersuckers being together for 20 years (he mentioned he distinctly remembered seeing the Black Supersuckers at the Vogue in '88 - probably not true) while Green River were celebrating having not been together in 20 years. And then at the end of the set when he was thanking the other bands, he referred to Gerald Collier as "The Best Kissers in the World," which was random and made me chuckle. To reiterate: they were really good.

Finally, the men of the hour were set to take the stage. The Supersuckers came out looking excited but overwhelmed, which is not something you often see in them. Eddie referred to the size of the crowd as "retarded," and Rontrose Heathman asked where all these people had been for the last 20 years. Then they busted into "That is Rock 'n' Roll," a semi-obscure b-side that seems to be their opener of choice these days. It was time to, as they say, "rock." 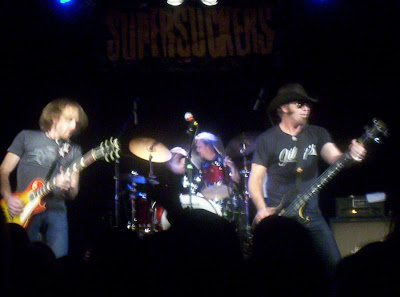 When Eddie explained after the song that the rest of the evening was to consist of a chronological history of the band, I may have achieved a slight bit of wood. This is a dream come true for a Supersuckers nerd. He then said they were going to play the first song they ever wrote together, Dan "Thunder" Bolton started in on the opening chords to "Poor," and I was happy as heck. They followed it with "Luck," "Girl I Know," and "Mudhead." Nice.

They then went into Smoke of Hell-era tracks, playing "Coattail Rider," "Tasty Greens," and "Hot Rod Rally." La Mano Cornuda was next (Eddie would preface each group of songs with "This brings us to 1993..."), and they rocked through "On the Couch," "Seventeen Poles" (featuring Eddie telling the origins of the song), "How To Maximize Your Kill Count," and their loungy-then-fast version of "Creepy Jackalope Eye." Sacrilicious was sadly barely represented, with the only nod given to "Bad Bad Bad."

At this point the acoustic guitar came out, and they reverted to the same setup they had used earlier at the in-store. 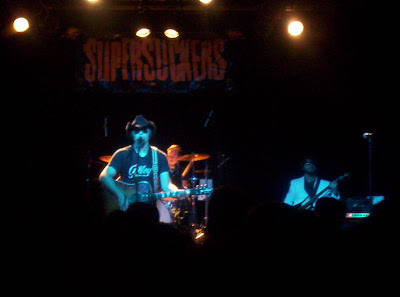 They played pretty much the same set, too (which screwed with the chronology of the whole thing, much to my chagrin), though Eddie did a solo version of "Marie" that was fitting and really pulled off well. By the time the electric shit was strapped back on and the first chords of "Supersuckers Drive-By Blues" were played, people were ready to rock again. Dudes started back in with the annoying slam-dancing and some of the hugest assholes were even crowd surfing. Fucking dopes.

The group ran through a sampling of the rest of their records, doing sweet versions of "Dead Meat," "The Evil Powers of Rock 'n Roll," and "I Want the Drugs" from the Evil Powers of Rock 'N' Roll record, and the standard selections from Motherfuckers Be Trippin'. They ended on "Goodbye," did the Patent-Pending Supersuckers Fake Encore, followed it with four songs from the new record, and wrapped the whole thing up with the always crowd-pleasing "Born With A Tail" finale.

After all was said and done, they had played for over two hours. It was a tremendous show. A major highlight also worth mentioning: 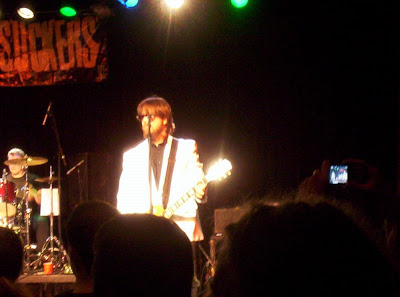 I got my 20th anniversary shirt, managed to not get knocked into too hard, and was glad (damn glad) that I made the trip up to see the show.
Posted by Wockenfuss at 3:00 AM

This is why I hate you. I am super jealous that I could not go to this with you. Please elaborate on the origins of 17 Poles, my all-time favorite 'Suckers track. I have a feeling I understand the basic gist of it but some of the lyrics seem thrown in at random. Bolton looks awesome. Any appearance/mention of Sniegle? And is just me, or is Eddie starting to look a bit like James Hetfield?

Oh, also, the idea of a chronological set list is every nerd's dream. I would have loved to see Unwound do this. Did you yell "Dead Homiez?"