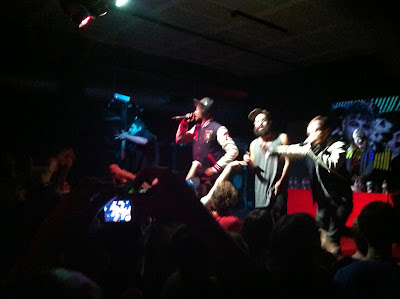 Das Racist won me over a few months ago.

When I first heard them I didn't really give a shit either way, then I was slightly annoyed with their snotty bullshit attitudes, and then I fell in love with the remix of Mr. Muthafuckin' eXquire's "Huzzah" and realized that maybe I misjudged them. I've been really getting into their new record, and though I can see why they're not everyone's cup o' tea, they've been mine recently.

So, when I heard they were coming to Branx here in Portland (the downstairs of Rotture), along with Danny Brown - who I've also been listening to a lot lately - and Despot, one of the other "Huzzah" dudes, I figured I'd go check it out. Monday night wasn't sweetening the deal for my wife, but she was nice enough to go along with me, because she actually enjoys Das Racist, too.

I hadn't been to Branx since they started calling it that, but that building has been so many different venues over the years that I assume at some point I was in that room. Anyway, it's a dank little bar-hole that somehow manages to barrier off an all-ages section, which was packed with high school dudes when we got there. It's kind of hard to describe, but they have the barrier diagonal across the front of the stage, so all the front-row spots are in the all-ages section, with the corner of the bar part starting at the very far right side of the stage. Yeah, I'm not describing that very well. Point being, if you wanted to be right up front, you had to get in tight with a bunch of 17-year-old bros, and we weren't doing that. But, we did get a good spot in the bar part, up against the little barrier. 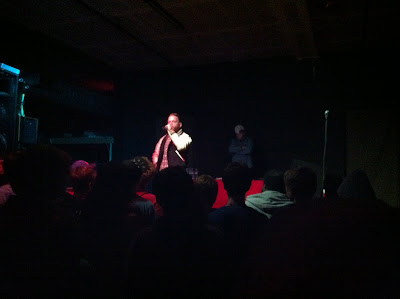 Despot rolled out first, backed by Das Racist crony Lakutis manning the laptop that was providing the beats. I hadn't heard a ton of his stuff before seeing him at the show (because he doesn't really have that much recorded material), so I was looking forward to seeing what he was going to come with. Not surprisingly, it was stuff from an upcoming album, and also not surprisingly, it was all pretty good. He was a bit awkward with the between-song chatter, almost to the point where I felt like he was fucking with us. Whatever. When he rapped, it was pretty badass. He probably did about eight songs and then left, though I figured we'd be seeing him later. 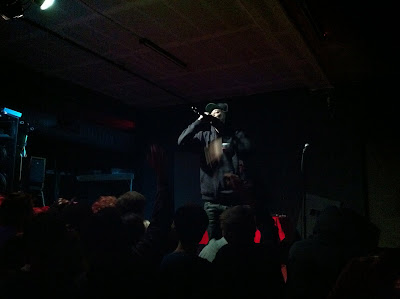 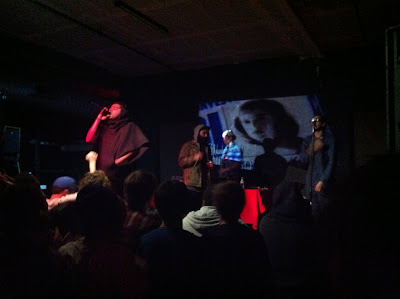 He probably shared some with the Das Racist guys, too, because maaaaaaaan were they high. Not that I expected anything less, but Heems strolled out wearing a sweatshirt-material poncho and looking like he had been crying for two hours. Dude's eyes were bleary, and his gaze was far-offish. But when they started it up, he and Kool AD got into it, in their own act-like-we-don't-give-a-fuck sort of way. At times it was frustrating, but when they did "Amazing" and Lakutis came out from behind the laptop table and busted his verse, they were all amped up.

The set sort of dipped a bit in the middle when they decided to do like three songs in a row over an instrumental of Dr. Dre's "Xxplosive," but it was slightly entertaining in its weirdness. Around that same time one of the speaker cones on the house PA caught fire, and everyone was too high to do anything but stare at it. Some bro finally put it out with his hand. That was bizarre.

The show sort of faded out more than it ended, with the guys just waltzing off stage after one of the songs was over. I was going to be pissed if we didn't get a "Huzzah" encore, and judging from the half-assed exit they made, I assumed it was coming. And, it was. All the dudes came back out, rapped the shit out of their verses from the song, and it made for a tremendous closer.

I ended up having a really good time. DR don't put on the tightest show in the rap business, but it was fun. And never have I seen such a weirdly diverse crowd at a rap show. Made for some great people-watching, and some annoyances. But that's the deal. Did I mention that they played clips of the Law & Order: SVU intro behind them (along with a lot of other film-collage stuff) while they played? Yeah, it was weird.
Posted by Wockenfuss at 12:40 AM