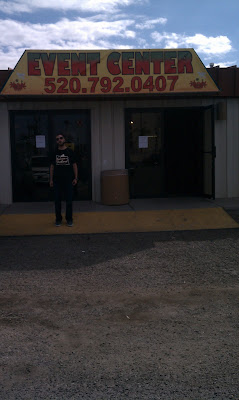 (Ed. note: I sent my brother Pocaroba on assignment to a record show in a questionable part of his hometown of Tucson, AZ, and he came back with a special report on this eclectic annual event. Thanks to him for another great guest post!)

This past Saturday I went and blew a lot of hard earned cash at the annual Tucson Comic Convention. I could regale you with tales of meeting the Honky Tonk Man, scoring a grip of old school Marvel Star Wars comics (including #1!) on the cheap, or getting way too excited about finding Mask comics based on the 80s cartoon show. But I won't. The point here is that my brother, Mr. Stallion Alert himself, notified me that night that there was also a record convention in my town the next day at the Las Cazuelitas event center. As a newly cash-strapped nerd I was both excited and tentative. It was one of those things where I wanted to go but was hoping not to find anything too awesome seeing as I was low on expendable fundage. I didn't want any record regrets.

So with that in mind I dragged the wife to her second Con' in two days. What a lucky lady. When we pulled up to the venue on the south side of town I got a tingle of excitement. This place was way sketchier than I had anticipated. You can't even see it from the road. You have to drive basically through a hotel parking lot and then at the very back is a dingy little building with the words "Event Center" on the front. This seemed like an awful good sign to me. This was my kind of place to score some records. 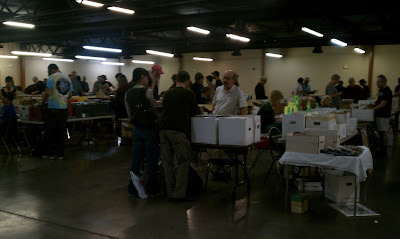 When I entered I chatted up the lady who was putting on the event with her husband. She said it was their fourth or fifth convention, also a good sign, and she got a kick out of the fact that I found out about it from a Record Collector magazine in Portland. I have to say, when I finally entered I was a little bit let down. The place actually had a pretty good size room but the record vendors only took up half. There were only probably about 20 people there and I could never really figure out who was working there and shopping there. All pretty odd. Also, for an event celebrating records and music, the place was library quiet. Every once in a while a song would come on but it would be followed by long spells of silence.

I realized pretty quick that I wasn't going to be finding a nice selection of 90s indie rock or 80s punk so I had low expectations as I made my rounds. The place was probably 60% classic rock, 20% jazz/blues, 10% 80s ass rock and 10% odds and ends. The odds and ends is what I was after. My favorite overheard conversation, and probably a good indicator of the crowd at this thing, went something like this: 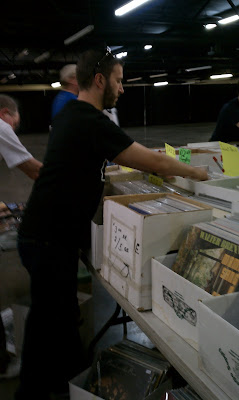 And it just kept going. He also took a good second pause between "jazz" and "and latin jazz." Which I found quite strange. Furthermore, are jazz and latin jazz different enough that they have to be separated like that? Next time someone asks me what I'm looking for I'm going to say, "Punk. And hardcore punk." I'll let you know how it goes. So I did end up getting some pretty cool stuff but not as much as I was hoping for. I did end up with a record regret. I found a copy of Hot Butter's album that has their song "Popcorn" on it. The cool thing was that the cover features an actual popcorn bag glued on the front. It was 10 bucks, which felt too rich for my blood at the time, but of course I regretted not getting it the moment I went home. Sweet, sweet regret. Still, I did get some stuff. 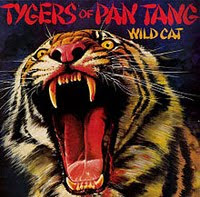 I had never heard of this band before in my life but apparently they still play today, making them a big deal for somebody. For me, it was the trifecta of an awesome record cover, a sweet band name and the fact that it was metal from 1980. Curiosity and the three dollar price tag got the best of me. Listened to a little bit of it and it is assy. Song titles like "Badger Badger" and "Don't Touch Me There" promise a good time. With Rocky on bass and Big Dick on drums you know they've got the rhythm section on lock. 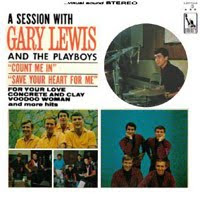 Growing up we had a copy of Gary Lewis' first album, This Diamond Ring, and I always enjoyed it. I digitized it recently and listened to it quite a bit (the title track is insanely catchy). So when I found this and realized it was his follow up, released only six months after his debut, I had to grab it. The cover is also really cool, showing Lewis behind the drum kit and snapshots that can't decide if their a cute boy band or a serious band making things happen in the studio. Oh, the confusion of 1965. This looks to be more of the same from their first album, with the boys contributing a few originals and filling most of the album with well-known covers. Can't wait to hear Lewis' take on "For Your Love" and "Runaway." Seriously, I can't. 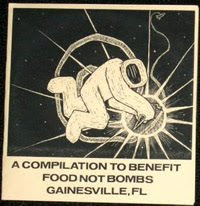 I bought this simply because it has the Descendents' "Lucky" on it and it was a buck. Truth be told, I already had the song but the dollar price tag and the sweet light green marble vinyl made it hard to put down. The other bands on here are Less Than Jake, Good Riddance and Animal Chin, all of whom I could care less about.

Now would be a good as time as any to mention that the rest of the stuff I got was at one booth, run by a guy who seemed to be in his 70s. He was super nice and probably had the best selection, for me anyways, in the whole place. He also had an entire box of random movie promotional items, such as scripts, lobby cards and actor 8x10s. So not only did I pick up some records but I also came home with glossy 8x10s of oily LBST-era Jean-Claude Van Damme, Robert Goulet, MacGyver, Grosse Pointe Blank-style John Cusack and, my personal favorite, an Eddie & The Cruisers-era black and white shot of a cocksure Michael Pare. I seriously wish this image was on a t-shirt. Because I would wear it. 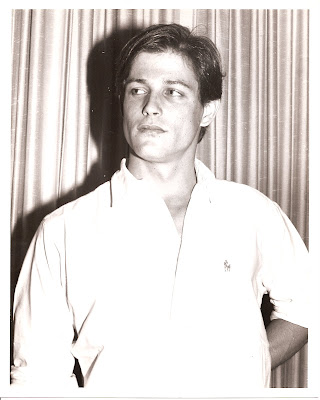 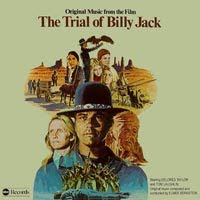 Being a kid who spent most of my adolescent nights watching late night movies, I have a soft spot for Billy Jack. I'm pretty sure TBS showed nothing but Billy Jack and The Trial of Billy Jack on Saturday nights in the 80s and 90s. If you enjoy watching a Native American guy who spouts poetry, runs a commune for hippie youths and roundhouse kicks anyone who messes with said commune, then the Billy Jack flicks are the ones for you. I'm especially excited about the tunes "Karate Fight" and "Freedom School Massacre," although I'm pretty sure they are only instrumental. Still, you have to respect a record that only lists 5 of the 12 songs on the back cover. The others are only on the actual record label. Because that's convenient. 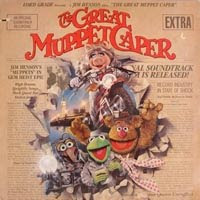 This one was a no brainer. The wife actually pulled this out of the bin. What a lady. Good and bad news with this one. Good news: it's still sealed, which after 30 years is pretty impressive. Bad news: it has one of those bargain notches taken out of the top. Not the full corner cut, just a notch. Still, it's pretty annoying. Aside from that this was always one of my favorite Muppet flicks so I'm happy to have the soundtrack. Now it's time to blast "Hey A Movie!" and "Piggy's Fantasy." 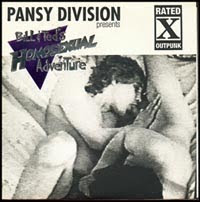 Finding this 45 made the whole trip worthwhile. My wife, the sport that she is, actually dug this out of a box and gave it to me. I seriously could not believe my luck. What are the odds of finding such an awesome record at a classic rock record show in Tucson? Also, keep in mind this is from the same elderly gent that had mainly movie stills and older movie soundtracks. Why he had a Pansy Division 45 which displays full on blowage on the front is beyond me. Funnier still was the look on his face when he was ringing it up. Needless to say he shuffled it to the middle of my stack pretty quick. Still, what a cool old guy to have this in his stuff. The best part? It was only a buck. It might be hard to tell from the picture but the Bill & Ted's logo is in a nice, shiny silver lettering. A class act, all the way. Even classier is their cover of Spinal Tap's "Big Bottom" on the b-side. "Talk about bun cakes, my guy's got 'em." Indeed.

And that was it. Aside from that Hot Butter record I left with no regrets. Even though I didn't pick up much I will still go next year. Hopefully I'll be into latin jazz by then.
Posted by Wockenfuss at 12:29 AM