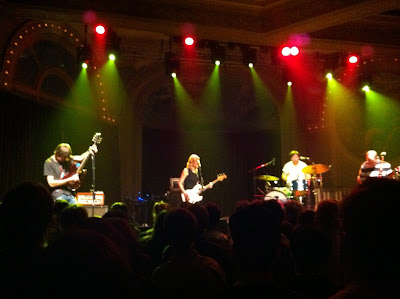 I haven't gone to a show by myself in a long time, but apparently Malkmus on a Thursday night is a tough sell. So, I rolled solo to the Crystal Ballroom, and after waiting in line for a half hour to get my will call tickets (?) I climbed the stairs and found a nice spot in the all-ages section, right next to a couple that looked roughly my age and their son who looked to be about nine. Yes, us Gen-Xer's are getting old. But we're still out on the town, making it happen!

Much like my recent expedition to see the Supersuckers, I somehow managed to completely miss the opening act, so when I got there, the crew was setting up for The Jicks. They came out about 20 minutes later, said some quick hellos (this was Malkmus' return to Portland after having moved to Berlin a little over a month ago), and then launched into "Jenny and the Ess-Dog." Boom.

After that it was pretty much wall-to-wall Mirror Traffic jams for the majority of the show, but I was fine with that. Malkmus is one of those dudes who always seems to be most interested in the stuff he recently wrote and recorded (one more reason the Pavement reunion was a big surprise), which makes sense, so it's nice to see he and the band do the new shit that they're still excited about. Plus, the songs on the new record are fantastic, so I was more than happy to see them play that stuff.

In true Malkmus fashion, "Senator," the band's most recent single - the video for which was released the morning after the show - didn't make the setlist cut, because, you know, that would make too much sense. I thought that was pretty funny.

So, yeah, they played a lot of the new songs, and at least two new songs that are so new they aren't even out yet: one of 'em was "Surreal Teenagers," which they played as a web exclusive for Jimmy Fallon recently. They also played Neil Young's "Mr. Soul" (I did not recognize that one, but have since figured out what it was), and a raaaaandom cover of the Sweet's "Love is Like Oxygen," which Malkmus was snickering through, but you could tell he secretly enjoyed the shit out of it.

The weirdest moment of the night was their performance of "Real Emotional Trash," which started out fairly standard, and then spiraled into an all-over-the-place jam that found the band looking at Malkmus, trying to figure out what the hell he was doing, and attempting to follow. If you know the song, you know it's long to begin with, and has a bunch of different parts. This time they just did the first few verses, went into the jam part, and never came back out. They rattled around for what felt like 15 minutes, and eventually it sputtered out. I really like the mid-section vamp in that song, so I was a bit bummed to have that excised, but whatever.

They also did "Baby C'mon," either as the last song or part of the encore. A random smattering of songs as always, but a strong bunch. Malkmus was freewheelin' on the guitar all night, and it was damn fun to watch. Dude's got some fancy fingerwork.

Not a bad way to spend an evening out on the town by yourself.
Posted by Wockenfuss at 1:56 AM