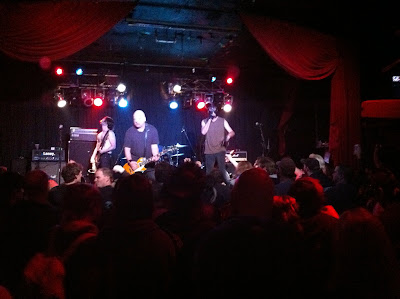 I've been annoyingly late to the last few shows I went to - when I thought I was getting there with time to spare - so this time around, I figured I'd show up a little earlier than usual. My pal (who was nice enough to go with me to the show so my wife didn't have to) and I got to Dante's at about 9:30, and the opening band wasn't even setting up yet. I'll get it right one of these times.

Eh, whatever: it gave me time to check out the merch table, which was filled with Dwarves CDs, vinyl, DVDs, buttons, stickers, keychains, belt buckles, girls' undies, at least six different styles of t-shirts, and Blag's out-of-print novel. When it comes to merchandising, the Dwarves are at a Supersuckers level of shamelessness. But, records don't sell like they used to, so I don't fault bands for doing what they can. And the ticket prices for this show were completely reasonable, and so was the cost of the stuff they were selling, so there's nothing wrong with that. 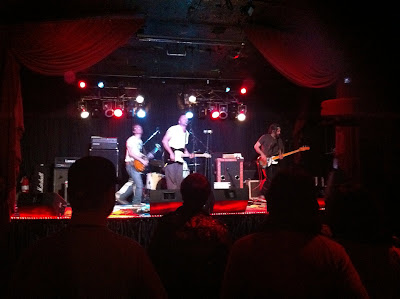 American Friction, the opening band, came on around ten, so we didn't end up milling around for too long. They got right into it, playing a strangely stark kind of post-rock that I really liked. Not sure they were the perfect fit to open for the Dwarves, but I guess it worked to ease the already half-assing-out crowd into the night of speed-rock ahead.

As is the case at every show I go to lately, there was a hammered 55+-year-old lady dancing around by herself. She looked like someone's mom; possibly someone's grandma. My friend said to me, "I have a bad feeling we're going to see that lady's tits before the night is over." And, we did. I'll get to that. 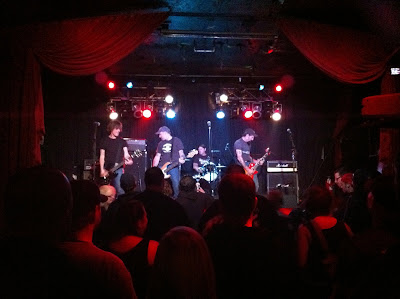 Zeke were up next, which shouldn't be surprising to anyone, because when it comes to bands that I never intend to see but end up seeing all the time, they're at the top of the list. Their bass player couldn't find a cable to plug in with, so there was a short lull while he tried to locate one. A piss-drunk girl near the front of the stage took this as a sign that she should entertain the crowd with edgy comedy, so she hopped up there, grabbed the mic, and started in: "A white guy, an oriental, and a black rapper..." Needless to say, she did not have the audience in the palm of her hand, and her material did not "kill." She would later be ejected for trying to do it again before the Dwarves came out.
I'm not a fan of Zeke, but there is some fun to be found in watching them play ridiculously fast for 45 minutes straight. Their drummer looks like he's in pain during most of it, and during the breaks he just flips off the crowd and insults his fellow band members. So, you know, there's something for everybody.

After what felt like a little too long of a break, the Dwarves finally emerged, walking out to the "Mighty Mouse" theme and all wearing masks because, you know, it's getting close to Halloween. One thing became very clear once they had taken their places on stage: guitarist Hewhocannotbenamed was not with them. It never even occurred to me that he wouldn't be touring with them, but I've since looked it up and apparently he hasn't been playing live with them for a while now. So, that was a bummer, and instantly made me feel like I wasn't getting the true Dwarves experience. But, they tore into "Dominator," and it was pretty sweet, so I chose to enjoy it and not dwell on the conspicuous lack of spazzy dong-flappery taking place on stage.

Speaking of flappy appendages, about five songs into the Dwarves' set, Blag announced that there was a topless girl near the front of the stage, and when we looked toward where he was pointing, there she was: the grandma lady, pressed against the front of the stage, completely shirtless, with her purse still strung over her shoulder. It was initially hilarious, then unfortunate, and ultimately depressing. 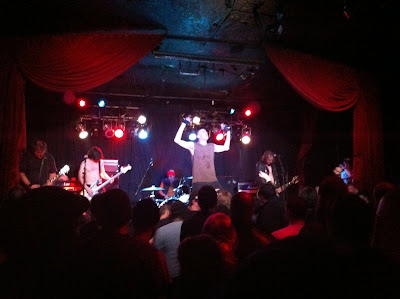 The members of the band all eventually lost their masks and tore through a ton of songs from all over their catalog, during what was probably a 45-minute set. Then they left the stage and didn't play an encore. To be fair to them, I'm not sure if it was their call or the decision of the sound guy, because he was pretty quick to jump up on stage and start shutting off amps right before he turned the house music back on.

But either way: kind of lame. So, between that and the lack of Hewho, I'd be lying if I said I wasn't disappointed. I did get an import 10" of theirs on red vinyl that I had been looking for, though, so that was cool. Still, it wasn't quite the show I had hoped for. There was only one small scuffle, Blag's stage-diving seemed perfunctory, and there was no male nudity. This was not the Dwarves I had been promised.

In protest, I did not buy a Dwarves belt buckle. That'll show 'em!
Posted by Wockenfuss at 1:44 AM