I Went to a Show: Supersuckers at the Hawthorne Theatre (October 2, 2011) 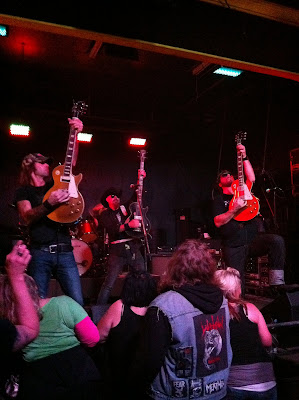 Sunday night with the Supersuckers. I'm sure I've spent a Sunday with the 'Suckers before, but I can't remember when.

Because I don't go to many Sunday night shows, I failed to take into account that the gig would be starting early, so my friend and I arrived at 10, which meant we missed both opening bands and got there about five minutes before Eddie and the boys took the stage. That was fine, but it was $15 to get in, and I kind of wished we would have caught one more of the acts to get our money's worth. But, whatever. At least we didn't miss any of the band we were there to see.

My pal hadn't seen the Supersuckers in years, so he was a great candidate for seeing their show. He knows most of their catalog, doesn't know what to expect, and is happy that the band is still doing it at all. Me? I'm happy they're still doing it, but their shows have been semi-predictable for years, so I don't go into 'em anymore expecting to be surprised by any of the material they whip out. There's always that random show where they play that random song, but for the most part, they stick to the tried-and-true numbers that the fans expect. I could complain about that forever, but I've made my peace with it: I know what I'm going to get when I go to a Supersuckers show, and I just sit back and enjoy it. If they play something that I didn't think I'd hear that night, it's a treat. If not, I at least get to watch Dan Bolton be awesome. 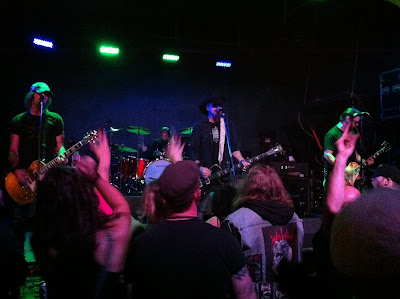 They didn't wow us with any deep cuts on Sunday night, but they did play three or four new songs, so that was something. I'm not going to pass judgment on them until I hear the album versions, but my initial take is that they sound a lot like the stuff from the last record, so you can take that as you like. Speaking of their new stuff, Eddie said they're finishing up their new record, and it should be out next year. We shall see.

This show was the third or fourth in what is to be a massive tour, and maybe they were just getting warmed up, but they didn't seem crazy-excited to be there. It wasn't the most packed gig, so maybe that was part of it. I don't know. It wasn't a bad show; just a standard one, I guess.

But I had a good time, as I always do. Bolton looks like he's trimmed up a little bit, and his guitar work was on point. And like I said earlier, I'm always down to watch The Steak wreak havoc on his Gold Top.

They're coming back to Portland for New Year's Eve, so it looks like I'll once again be ringing in the new year with the Supersuckers. And Reverend Horton Heat, apparently. My wife couldn't be happier.

I'm going to at least two more shows this month, so I'll be reporting on those soon. Stay tuned.
Posted by Wockenfuss at 1:11 AM