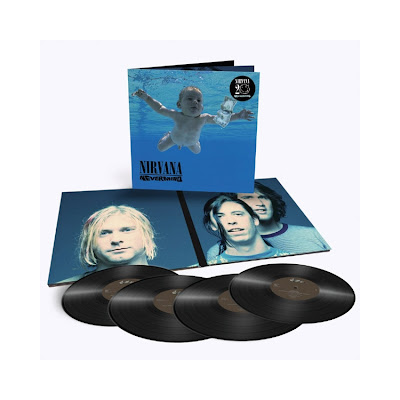 Yes, I broke down and bought this.

Nevermind is one of my favorite records ever - sentimentally so, even - and though this thing reeked of cash-grab from the get-go, I felt I had to pick up the Deluxe Edition on vinyl. There's stuff on it that I don't have, and the packaging looked pretty sweet from the outside, which gave me high hopes for the inside. When Music Millennium announced one of their 20%-off-all-new-vinyl sales, I saw my window (this thing ain't cheap) and took the plunge.

Here are my thoughts on it.

Like I said, the packaging is outwardly impressive. It's basically like a bound book, with a half-inch spine that houses four sleeves that each hold a thick-ass record. In what I think is actually kind of a cool move, they've replaced the $1 bill on the cover with a $20. A bit cutesy, but whatever. The sticker on the shrink wrap promised "expanded artwork with unreleased photos," but that's overstating it a bit. The "centerfold" is the standard group shot from the original issue of Nevermind (the one in the photo up there), and other than that there's a few pictures of the master tapes boxes, a proof of their 8x10 era-appropriate DGC promo shot, and another (maybe unreleased?) band shot next to the original lyrics/poem thingy that was in the inside sleeve of the original issue.

There's also a live shot of Cobain crowd-surfing that's used as a backdrop for the necessarily expanded reissue credits. But that's it. No booklet, no liner notes, no stickers or any other ephemera. Worst of all, there's no download included. Not that I'll have any trouble tracking this thing down online, but still: when I spend this kind of money, I prefer to get high-quality audio direct from the source. So, that was a disappointment.

Will this thing look awesome on my shelf? Yes. Do I feel stupid about caring about something like that? Not at all. Is that why I buy stuff like this? It's a plus, but no. I want the music. So let's break it on down.

As you'd probably guess, the first LP is the original album, remastered. I read some forums online where people were complaining about the fidelity of the remaster, and though I'm no audiophile, I decided to A/B test this new version next to my original US copy of Nevermind. The 2011 issue sounds louder, but in that shittily compressed way that a lot of albums do these days. It's not night and day, but the original LP definitely sounds better. It's most apparent in the drums, which pack less of a punch in the reissue, and that's no good.

So, I'll probably be sticking to my 1991 copy for standard listening, which I would have done anyway, because I always like to hear stuff like this as it was originally released.

LP Two, Side One: B-Sides

LP Two, Side Two: B-Sides and The Smart Studio Sessions

The B-Sides continue on the second side of LP Two, with the live version of "Drain You," which was also from the "Come As You Are" single, and live recordings of "Sliver" and "Polly," which were B-Sides on the "In Bloom" single, which was, strangely enough, never released in the US. I don't have that single (it's a semi-rare 12" picture disc), so I'm happy to have proper versions of these.

But other than those two cuts, I already had all this stuff, and I'm sure every other more-than-casual Nirvana fan does, too. I guess it's cool to have them all in one place, and I appreciate the thoroughness and chronological accuracy of it all, but it feels like padding. And even that wouldn't matter too much if there wasn't more noteworthy stuff that made it onto the Super Deluxe version that isn't included here. But I guess I get it: this is the same track listing as the standard Deluxe version, and they want you to shell out big bucks for the ridiculous Best Buy box set. There's reproductions of magazine clippings in there!

Anyway. From there it goes into the Smart Studio Sessions, which are basically the demos for Nevermind. To me, this is the meatiest section of this collection. "In Bloom," "Immodium" (the original title of "Breed"), and "Lithium" wrap up this side of the second LP. I bought a 7" bootleg in 1992 that had this version of "In Bloom" on it, but the recording was ass, and this one's a bit more cleaned up. It also had "Immodium" on it, but the version here is different, with Cobain not playing guitar during the first part of the verses. Pretty sweet. And I don't think I'd ever heard this version of "Lithium" before. For the record, these are the first three tracks that are asterisked as "previously unreleased."

LP Three, Side One: The Smart Studio Sessions

The rest of the Smart Studio Sessions are on this side of the third record. "Polly" is just a different mix of the version that would end up on Nevermind, and "Pay to Play" and "Here She Comes Now" are the same ones that were previously released on the With the Lights Out box set, and that was even after they had been put out on the DGC Rarities comp and a split single with the Melvins, respectively.

They've got "Dive" listed as previously unreleased, but other than a few seconds of extra noise at the beginning, it seems to be the same version from Incesticide. Not sure what's going on there. "Sappy" is one of many versions of that song floating around, and it's been heavily bootlegged, but this version is of a higher quality than most of those.

I enjoy a good pre-album demo reel, and this one is solid. The audio quality is rough, but totally listenable, and it's great to hear where some of these songs started after knowing exactly where they ended up.

You can look at this portion of the collection a couple different ways: It's either proof that they're officially scraping the bottom of the barrel for anything Nevermind-related and this was down there, covered in sludge, or they're catering to super-fans who want to hear any and everything that the band was doing around the time of this LP's original release. If you get a boner for anything that pulls back the curtain on the band, then you'll probably love these rough, rough versions of some songs that would end up on Nevermind, and a few that didn't.

The boombox version of "Smells Like Teen Spirit" was included in the With the Lights Out box set, but "Verse Chorus Verse," "Territorial Pissings," and "Lounge Act" are exclusive to this set. The recordings are assy, but these are early versions of the songs, with a lot of half-formed lyrics and slight differences in arrangements. So it's cool to hear that stuff.

LP Four, Side One: The Boombox Rehearsals

The rehearsal session continues here, with "Come As You Are" not being listed as previously unreleased, and I have no idea where this version of the song would have been used before, because it's not on With the Lights Out. Huh. It's followed by "Old Age," a rare track that was first released in a much cleaner, studio-ish version on the box set. There's also a long-ass version of "Something in the Way" with different lyrics, and a really rough take on "On a Plain."

The Super Deluxe, CD-only version of Nevermind includes the fabled "Devonshire Mixes," as well as a live show, and it bums me out a bit that neither of those will be available on vinyl. To me, the Devonshire Mixes are much more significant than the B-sides or the boombox tapes, but I guess I see the logic in not including two different versions of the same album in one set. Still: if you're a fan of this record and haven't hear those mixes, hunt them down. They're significantly different, and really cool to listen to.

Side note: I saw the DVD for the Live at the Paramount show that was released simultaneously with this set (and in the Super Deluxe version), and it's in one of those weird plastic, half-tall cases. What up with that? Fear not: I'll bitch about that after I buy it.

Any thoughts on this stuff?
Posted by Wockenfuss at 12:33 AM