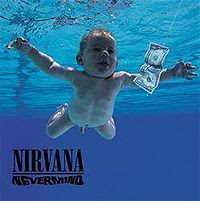 At the beginning of my sophomore year in high school, I had a friend who was - via his older sister and his predilection for blowing money on pot - more juiced-in with the older crowd (seniors!) than the rest of us. Between gravity bong hits, these older dudes were turning him on to some sweet music. We all had our ears to the ground, but he had enough expendable cash to actually buy these CDs (still a fairly new technology), and he was gracious enough to share from time to time. He had hipped me to Sonic Youth's Goo the previous year, and I was eternally grateful to him for that. The dubbed cassette he gave me was getting plenty of use.

He asked me at school one day if I'd heard Nirvana yet, and I admitted that I hadn't. He gave me a lift back to his parent's house after school, insisting that I had to hear it. I can't remember exactly how he prefaced the listening-to of the album, but I do know that he hyped it up immensely. Of course, I was skeptical, but I was more than game to give it a listen. His parents had a ridiculous sound system in their family room, and I saw him cranking the volume knob as he placed the disc in the tray. I waited.

I've romanticized the first time I heard "Smells Like Teen Spirit" to the point where I now usually end the story with me scooping handfuls of diarrhea of out of my underwear in my friend's guest bathroom while trying to get my boner to go away, but I'll spare you the hyperbole. But I can say, with complete conviction, that it just felt like something else. Like all this "alternative rock" that we'd been listening to for the past year or so had been building to something, and we didn't realize it until we heard it. But when we heard it, we knew, this was it.

The rest was a whirlwind. I immediately rushed out and bought the "Smells Like Teen Spirit" single on cassette (why didn't I buy the whole album?), and listened to it over and over and over. "Even In His Youth," a non-album track was on the b-side, and I rocked that hard, too. I mean, just repeatedly. Soon after that, I remember being in another friend's basement and seeing the "Smells Like Teen Spirit" video for the first time. We couldn't believe it was on MTV. And then we couldn't believe that they were playing it every fucking hour. And then like a week later it was all of a sudden the biggest thing in the world.

And then in January they played on SNL, and my friends and I all got together to watch it. They played "Territorial Pissings" as their second song and wrecked their equipment. I wanted to stroke my teenage dong. By this time I had a proper cassette copy of the album, and it was all I listened to. We watched the "Teen Spirit" video every time it came on, and waited for the world premiere of the "Come As You Are" video. I bought the SPIN magazine with Nirvana on the cover and studied it like a textbook. I bought the Rolling Stone with the first article about Nirvana they did and took it to Kinko's and made a color copy of Kurt Cobain's face to hang on my wall. I grew my hair long and parted it down the middle. I bought a Nirvana smiley-face t-shirt from the local rock shop and wore it way too often.

I bought the "Come As You Are" CD single for the bonus live tracks, and the "Lithium" single for the unreleased cut "Curmudgeon" and the fact that it had all the lyrics to Nevermind on the inside. I found out that Cobain screams "God is gay" at the end of "Stay Away" and I thought that was fucking fantastic.

I bought the "Sliver" 12". I traveled to Portland to buy (the aforementioned) bootleg 7"'s which contained songs that no one had heard of. I combined these with dubbed cassette copies of other unreleased songs and made an entire mix of Nirvana songs that weren't on their proper albums. It sounded like shit but I didn't care. I even bought the Sassy magazine that Cobain was on the cover of. I wish I would have kept that.

And I listened to Nevermind until I thought I should have been sick of it, realized I wasn't, and kept listening to it. I eventually got a little tired of a few tracks on the first side, but I still contend that the second side of the album ("Territorial Pissings" - "Something in the Way") is one of the finest sides of a rock album ever. Songs like "Drain You," "Lounge Act," and "On a Plain" might never get old for me.

A guy I work with told me that he heard his nephew saying "What was that band Dave Grohl was in before Foo Fighters?" If I heard my kid saying that, I'd toss him out on the street. These fucking kids today.

I have an original U.S. pressing of this LP, and that's all I ever wanted. I found one many years ago in a record store, bought it, and I'll keep it forever.

When it comes to records that really played a huge part in my life, this might be at the top of the list. There's a few others, but if it really came down to it, it's this one. I feel like this album has fallen out of favor with critics over the years, and I'm not quite sure I get that. I listened to it today and it's still incredible. Every single song.

Nothing better could have come along for teenage me.

"Territorial Pissings"
Posted by Wockenfuss at 1:18 AM

I remember vividly the first time I heard "Smells Like Teen Spirit." I was 12. I was in the backseat of our father's car and you and I, like the total dicks we are, were both listening to walkmans rather than talk to anyone. You basically told me that this song would blow my mind (or something to that effect) and I popped the cassingle into my walkman. And, as corny as it sounds, it blew me away in a way I cannot explain. I'm trying hard not to be corny, but it felt like it all made sense to me. This was music I could get behind. I always had a hard time with Poison but this made complete sense to me. And I wanted to hear it over and over and over and over again.

Faith No More's "Epic" was the first piece of music to ever really connect with me in a personal way. Words can't describe my connection to that album at that time. And that led to Mr. Bungle's "Mr. Bungle," which was decidedly more "alternative" (although I don't think I knew that word) and I loved it. And then came Nirvana which (corny statement coming) literally changed my life. The music that I have listened to for the last 20 years (which is pretty much my main hobby and source of pleasure) is all a direct after effect of hearing that song in that walkman. It gave me a fever to find other music like it. I desperately wanted to find more bands that made sense to me. Still do. It shaped my views on politics as a young man and the world in general. And it made growing up in the NW seem like a lucky thing.

Oh, and this record is insanely awesome, although I have heard it too many times to even be objective about it anymore. "Lounge Act" and "Territorial Pissings" remain personal favorites and their first performance on SNL is a teenage highlight. I could go on for days.