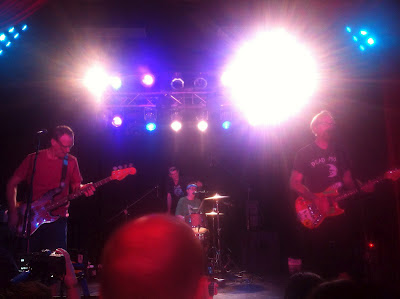 Hazel twice in one year? I feel like a flannel-clad teenager again.

This show was part of Musicfest NW, and I wasn't sure if that meant it would be more crowded or less. It turned out to be not uncomfortably jam-packed, and the people who were there were mostly older, so it made for an atmosphere in which you could actually watch the music and enjoy the show, which is what old-man me is looking for these days.

The one exception was this backwards-hatted bro who shoved past my wife and I right before Hazel went on, stumbling and generally assing out. He posted up right in front of the prime spot I had locked down, the bill of his hat almost jabbing me in the chin, and I braced myself for the worst. Then, right as I was figuring out how we could escape his idiocy, he winged an empty tall-boy of Pabst at the sound guy while he was checking cables onstage, and promptly got escorted out by security. And I laughed. Oh, how I laughed.

But I'm getting ahead of myself. 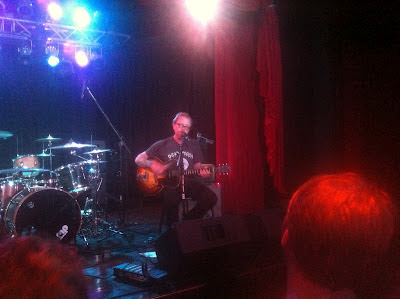 Pete Krebs opened the show - which I soon found out was being billed as a Cavity Search showcase, though I never saw that mentioned anywhere - and he did it solo, which was fine, except that in certain listings he had been slotted to appear with Gossamer Wings, his ever-changing (and long-dormant) backing band, and I was excited to see him plug in and possibly rock a bit. Still, I don't get to see Pete play his old solo stuff very frequently anymore, so I wasn't pissed about the stripped-down setup - just mildly disappointed.

Anyway, he did play some stuff from the first Gossamer Wings records, including "Pacific Standard Time," "Analog," "Sweet Ona Rose," and "Thunderstorms and Alcohol." He also whipped out some new tracks that are apparently going to be part of a new solo record he's putting out sometime soon. The songs sounded a lot like the stuff he was doing a decade ago, and I'm all for that. 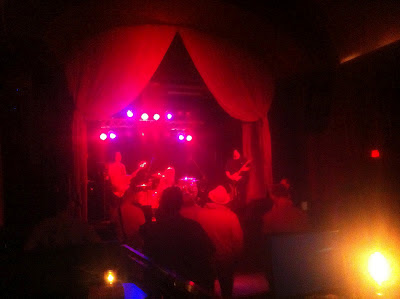 Sno Bud & The Flower People were next. I only know these dudes from seeing their names on flyers when I was in high school, and from some friends whose music taste I did not trust listening to them around that same time. Oh, and from an old video on Bohemia Afterdark, which also aired during that era. Never felt like it was my thing, and their set didn't do much to change that.

Here is a video of one of their songs from the show. 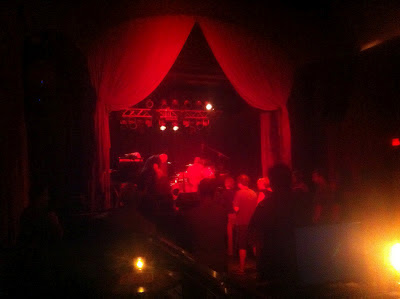 The next band up was dirtclodfight, who I'm embarrassed to say I'd never even heard of. Apparently they've been around for years, have released stuff on the Cavity Search label, and enjoy pummeling people with their rock assault. It was just two dudes, a guitarist and a drummer, and after the lead guy knocked out a few acoustic songs at the beginning of their set, he plugged in his guitar (possibly a baritone?) and they went nuts. It was sweet.

Here's a video of one of the songs they played. 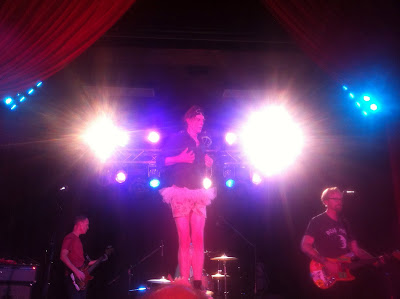 The last time I saw Hazel they didn't have Brady, their bass player, with them, so I was giddy when the dude walked out on stage. (I knew he was going to be there, but I was still little-girl excited for the full lineup.) They went right into it, and I've gotta say: it might have been the best reunion show I've seen of theirs. They had a few little flubs (mostly when they played "Boog," which they hadn't rehearsed), but overall it was a really tight set of songs.

Because I am a loser, I kept track of the setlist. Here's how it went: 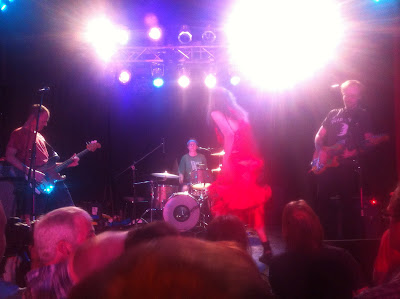 Fred's dancing makes my wife uncomfortable. She's always afraid that he is going to fall when he's balancing on the rickety tray-table he brings out with him, or that, when he's in his leotard, she's going to "see his balls."

Jody talked a lot during the set, and at one point stopped the show dead so she could tell a joke. Pete stood there, looking awkward/annoyed. It would not be a proper Hazel show without this moment.

Someone yelled out for "Cosmic Allison" and Jody said, "Did that song ever even make it onto an album?"

Someone else yelled out for "Green Eyes" and I don't remember exactly what Pete said, but I think he just repeated the name of the song and said "wow," like it had jarred something that he hadn't thought about in years.

Before they played "Truly," Brady said that it would definitely be their last song, because they had played everything they know."

Right when they came out, some dipshit was talking loudly on his cell phone in the front row and tried to hand it to Brady because he wanted him to say hi to his friend in Texas. He then proceeded to throw devil horns for the duration of the show, and at one point Jody looked at him and said, "What is your deal, dude?" He did not notice.

There were a few pro-looking cameras there, and I also saw some dude rigging up a board recording. I would like copies of any and all of these things. 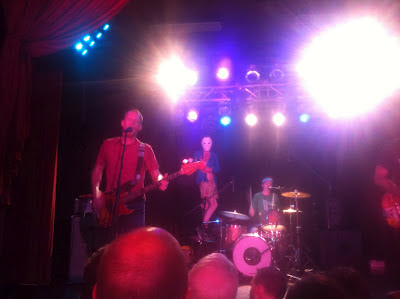