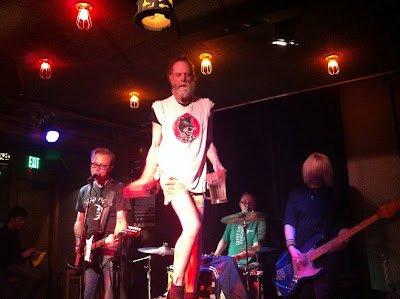 Well, this isn't how I expected to spend my Saturday evening.

I'm a big fan of Hazel (see here, here, and here), and I've been lucky enough to see them every time (I think) that they've reunited since their dissolution in 1997-ish. They've only done a handful of these shows, and the gigs have always been at somewhat sizable venues and widely advertised. Not this time. In fact, I'm lucky I even ended up seeing this short set.

A friend of mine was in a band called Havoc Kow that put out a tape on Hazel drummer Jody Bleyle's Candy Ass Records in the early 90's. I guess he has kept in touch with her, because he hit me up late this afternoon to let me know that she had emailed him to tell him that she and Hazel frontman Pete Krebs were playing at Al's Den at 7 tonight and that they were going to be doing some Hazel songs. I got this message from him while I was sitting at Ringler's - which I haven't been to in at least six years - having lunch for a friend's birthday. He's the most non-Ringler's guy ever (it's kind of a bro bar), but there was a dude playing music there that he wanted to see, so that's why we were there.

Anyway, I'm mentioning this because Ringler's is right next to Ringler's Annex, and Al's Den is directly beneath the Annex. So, I basically got the news that there might be some Hazel-ish stuff going down in an hour or two, and I was already right next to where it was happening. 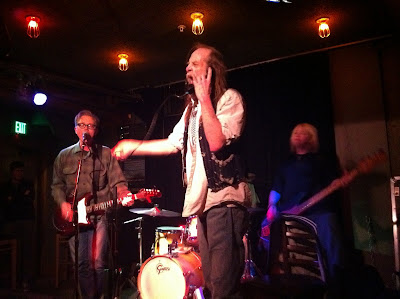 I've been to Al's Den before, and it's a low-key little place. There's a hotel connected to it, and the venue specializes in singer/songwriter stuff that out-of-towners can enjoy while grabbing a meal. I guess this is why I figured it might be an acoustic set, or at least something more stripped-down than the usual Hazel show. But when the wife and I (she was very understanding about all this) were walking toward the Den and I saw Hazel dancer Fred Nemo breeze past us on the street, I began to wonder what we were in for. (My wife after Fred passed us and I told her who it was: "I thought that was a homeless person." He's still got it!)

So, we headed down to the basement that is Al's Den, and when we got in there I saw Pete tuning an electric guitar at a table he was sitting at with Jody, and three drag queens standing next to them. There were two other drag queens on stage. Turns out they're having some big celebration for the Crystal Ballroom's 100th anniversary, and we had stumbled into the tail end of a female impersonator show where the performers were doing lip-sync/dance numbers and whatnot - you know, a drag show. My wife couldn't have been more excited; she loves that stuff. So I suddenly didn't feel so bad about giving her no choice but to accompany me to this show. 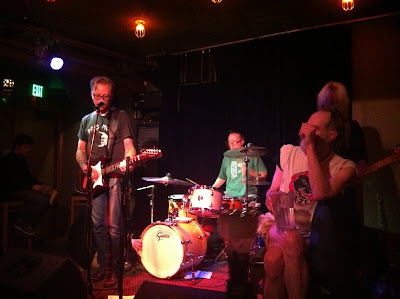 There were a lot of people there, but after Poison Waters said her goodbyes and announced that "Pink Jody" was coming up next, we were able to snag a front-row table that was vacated by a guy that bolted right after the drag queens were done. There was a short interlude Q&A (long story) by headlining act A Simple Colony, but after that, Pete and Jody took the stage and started getting set up. Also setting up: Donna Dresch, Jody's bandmate from Team Dresch, who would be handling the not-present Brady Smith's bass duties. (We later found out via stage banter that Brady is living in Abu Dhabi and Pete and Jody had not told him about the gig because they were afraid to. Pete had someone call his answering machine and hold up the phone while they played their last song.)

So, they plugged in, things started squealing a bit, Fred took the stage right after the first song started, and it felt like a real-deal Hazel show, aside from Brady's absence. But Donna did a fine job keeping up with the rusty/sloppy Pete and Jody, and the band kept it together pretty nicely aside from a few bits here and there. Who cares. It was just awesome to see them onstage. I'm a nerd, so I kept track of the setlist. Here it is, in order:

Those last two tracks were a bit unexpected. So, yeah, they played eight songs, which was apparently all they had "learned" for the gig, and the few of us Hazel nerds who were lucky enough to make it down there pretty much freaked out the whole time. 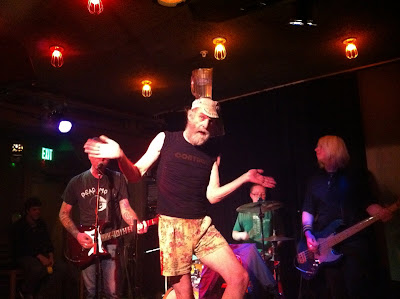 A few other things of note:

Though it was a short set, Fred still managed to change outfits four times, put on a dress, and do the water-pitcher-on-the-head balancing act (see picture above), which was making my wife very nervous. He didn't spill it.

During one of the songs - I think it was "Comet" - Jody strayed from the normal lead part she was supposed to sing and sang "Yeah, and you don't stop/'Cause it's 187 on an undercover cop" instead.

There was a hammered-drunk dude that all of a sudden appeared behind me and was screaming for "King Twist" at the top of his lungs. If you know how small Al's Den is, you know how obnoxious this was. It was even more grating for me because he was spitting all over me. But, they actually played "King Twist" and he was happy. Then after the show ended he made a beeline for Pete and fell into a table full of people in the process. After he recovered, he hugged Pete. I also heard him (as did everyone in the room) on the phone yelling to someone about how he was watching Hazel and it like he had been "transported back to 1993." 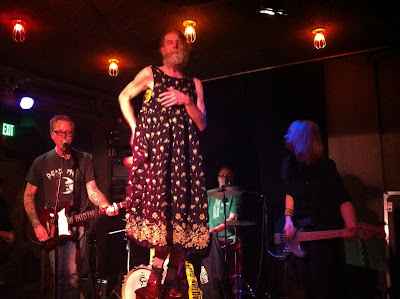 This was so nicely done I feel better about missing it. Your wife being nervous about the water is cute to me. To experience the uncertainties of Fred's performance for the first time really is a gem.

I appreciate that, D. Also: in the new Willamette Week (the print edition) there's a little blurb about the show and they do say that there are future plans for more Hazel shows.