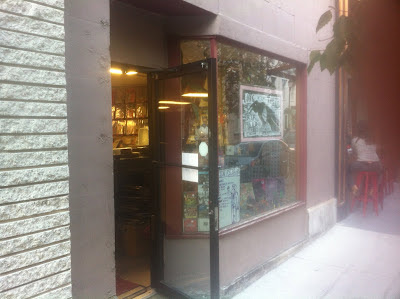 I found myself back in Philly (I've been there twice now; I can call it that, right?) for work last week, and though my stay was short, I was determined to get at least a little record shopping in. I had a great time combing through stores last time I was there, but there was one place I wanted to go to that I didn't end up visiting, so I put that at the top of my list.

If you've never driven a rental car around the heart of Philadelphia, navigating the insanely skinny one-way streets while trying to glance at your phone for directions, only to get near your destination and find out, after circling for twenty minutes, that parking spots apparently don't fucking exist, I highly recommend it: it's a great way to test the extent of your sanity. Me? I was ready to completely lose my shit, so I found a parking garage-type thingy (it was more like just a dude with a lot, rearranging vehicles like puzzle pieces) and ended up paying ten bucks to be in the record store for an hour.

Whatever. The important thing is that I made it to Long in the Tooth Records, which I had heard from locals was the best record store in town, and was the one that I didn't make it to last time around. Here's a picture I took of one side/corner of it: 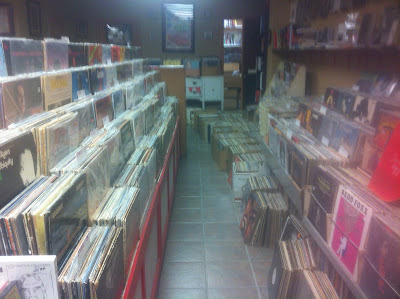 Pretty sweet, right? Totally, except that most of that stuff is organized only by genre, not alphabetically. Same with their 7"s. It wasn't a total mess, but it's the kind of place that I would really need to spend a day in, not a humid hour where I'm sweating through my shirt because it's so hot and I'm flipping through shit at top speed like a sad, sad man who has to take advantage of this because he may never be back.

Still, I managed to find some stuff. Check it: 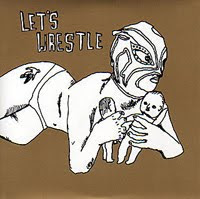 I had never heard of this band, but their name, combined with the cover and a $2 price tag was good enough for me. And, on top of that, the record's on gold wax that matches the cover, and the sleeve is hand-numbered and autographed by the band. And, on top of that, it's actually pretty good. The title track/eponymous jam/band theme song on Side A is tongue-in-cheek punk that does some sweet wrestler name-dropping, and the B-Side, "I'm in Fighting Mode," somehow manages to follow that up with some poignancy. These crazy UK kids. I'm into it. 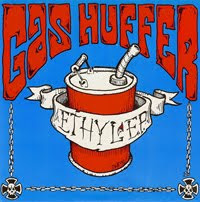 It just wouldn't be a record-shopping trip at this point if I didn't come up on some Huff. This is an early one, featuring four songs recorded by Jack Endino and some awesome artwork, which I believe was done by the band's own Don Blackstone. I now have four Gas Huffer 7"s, and three other splits they're featured on. So I've got that going for me. 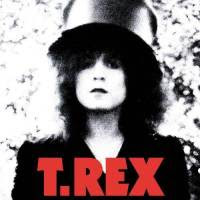 As much as I love Marc Bolan and T. Rex, when it comes to vinyl, my collection consisted of an old 45 and a ratty copy of Electric Warrior I stole from my uncle in 1990. I'd been meaning to purchase this LP for years, but just never came across a clean copy that wasn't overpriced. Until I found this one. This thing looks brand new, is an original, and didn't cost me as much as it could have. If you've never listened to this record, I don't know what your problem is. Maybe you're just shitty at life? 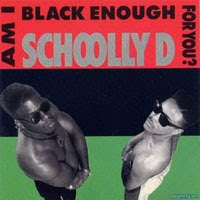 Schoolly D records aren't ultra-rare, but I don't come across 'em in record stores too often, and when I do, at least in Portland, people try and act like they're ultra-rare and charge way too much. This one is in sweet shape, and they weren't trying to sexually assault me on the price, so I was diggy down. Have I ever told you how 1989 was the greatest year for hip-hop ever? Because it was. This is some real shit. 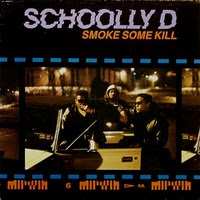 Good lord, I should have had this when I was a kid. Yeah, I probably shouldn't have been listening to "Mr. Big Dick" or "Same White Bitch (Got You Strung Out on Cane)," but man, the drums on this record would have made my head explode. They still do. Schoolly was the king of minimalist 808 rap (probably just because of budget constraints, but still), and this album harder than hard. I'm assuming he was shirtless for most of the recording sessions. Boom. 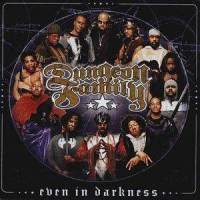 They had a copy of Outkast's Southernplayalisticadillacmuzik behind the counter at Long in the Tooth, and as much as I wanted to shell out the $75 they were asking for it (it was a really nice copy, and probably almost worth that), I couldn't legitimize it. The next-best thing was this LP, which I've never seen in the wild before. The cover's got a little wear, but the LPs are in great shape, and so is the insert. And, the price was more than fair. If you've never bothered with this record, you should bother with it. It's dope. 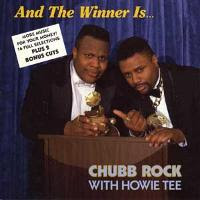 1989 strikes again. Not sure why I've been coming up on so much Chubb Rock lately (this place even had a few Chubb records that were too beat up for me to buy), but I seem to be developing a knack for it. I'm not going to sit here and act like I'm the world's biggest Chubb Rock fan - in fact, if I were being honest, I'd probably tell you that I think some of his verses are flat-out not good - but his shit's usually in the five-dollar range, and it's worth that to me. 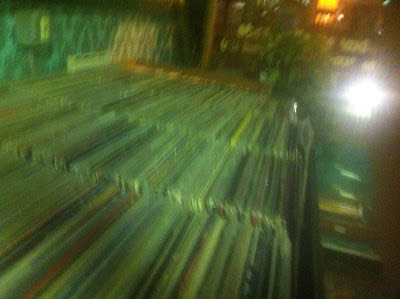 Long in the Tooth closed at 8, and I left there a little before that. I got my car from the crazy parking place, hit the road, and made it to Beautiful World Syndicate by about 8:25. They closed at 9, so again, I was in a rush. But, this was a place I went to last time I was out there, and I knew even a rush job would be worth my time. Above is a really shitty picture of their New Arrivals section, which is mammoth. I managed to look through all those records and some 7"s, and I came away with some decent finds. 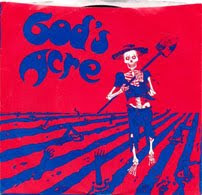 God's Acre is yet another band I know from the Teriyaki Asthma compilations, and another band that I assumed was from the NW, who's not. But, they sound like they could be, so that counts for something, eh? This thing's got two short, semi-heavy songs on it, and though I listened to them just once, I enjoyed them more than I thought I might. And that's all I can ask for. 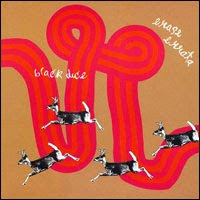 This was definitely a hasty, last-minute, the-dude-is-asking-me-to-leave purchase, but it's an interesting little record. I've only recently been discovering Black Dice and their ever-shifting walls of noise, and though their track here ("Untitled #5.5") is pretty much a droney throwaway, the two tracks from Erase Errata, who'd I'd never heard of, are melodic enough to make up for it. Clear red vinyl. 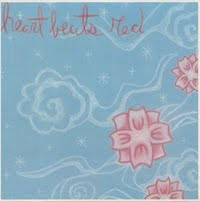 I instantly recognized the cover to this record, though I initially couldn't place how I knew it. I eventually remembered that my brother had it a decade ago, and I found this article, which would make that make sense. There's a strange lack of info about this band online, which is annoying. Anyway, the copy I got is all wrecked on one side, though it still plays through the pops. Turn-of-the-century lady rock. 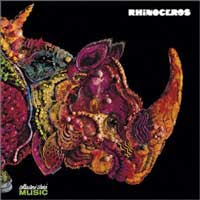 Here's why I bought this record: It's from 1968 on the Elektra label, is produced by Paul Rothchild (the Doors dude), and it features Billy Mundi, who was in one of the earliest incarnations of The Mothers of Invention. In fact, it was around this same time. I don't know if this was right after or during his stint with Zappa. Maybe the dude was a workhorse. Regardless, I've barely listened to this, but I've got unrealistic expectations for it so I'm sure I'll be disappointed. 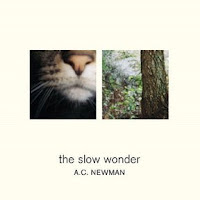 This was another purchase made in haste, but I regret nothing. I'd never heard the solo work of the lead dude from The New Pornographers, but now I'm kicking myself for waiting so long. I listened to this LP twice through the other night and loved the shit out of it both times. "The Town Halo" especially. Sweet-ass jam. I am currently resisting the urge to sample it and make awesome rap music out of it. 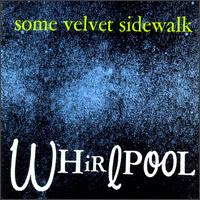 Hey, I finally got a Some Velvet Sidewalk LP to go with all the 7"s of theirs I've been buying lately. I thought this might be the one with "Mousetrap" on it, but it's not. It's the one with "Mouse & Rat" on it. Close. I haven't listened to this record yet. 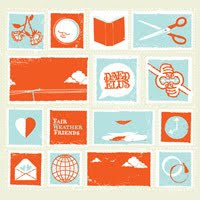 Daedelus is a dude who works with Busdriver sometimes, and though his solo beats lean more toward electronic than hip-hop, I've actually found that I enjoy them. This is an EP with five songs, and it's only about 15 minutes long, but from my first pass at listening to it, I think it'll make a nice addition to the instrumental mixes I sometimes put together. It's about as blippy and glitchy as I get.

And that was it. Not bad for a sweaty two-and-a-half hours in unfamiliar stores. Yeah, I'll make shit happen.
Posted by Wockenfuss at 12:00 AM