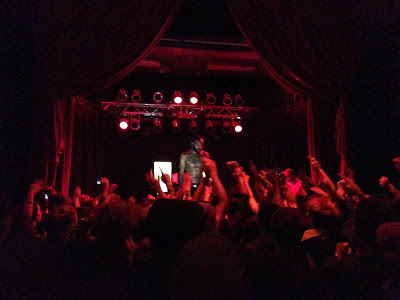 I went from writing off Death Grips as punk-rap flashes-in-the-pan to considering them one of the most innovative, intriguing bands on the planet in the course of a day. Something clicked and I finally realized that, even if the naysayers are right and these dudes are just cyber-savvy attention whores, I'm buying into it because if nothing else, they're a damn fun band to follow: they release a ton of music, a ton of videos, and everything they do seems to be shitting on the thing they just did a month or two before.

The danger of a band like this is that they're bound to burn out or implode before they really finish their business (Death Grips has basically already committed career suicide on numerous occasions), so when I heard they were coming to town, I was really hoping I'd get a chance to see them. A pal of mine in the music-journalism business responded to some gentle prodding by me and hooked up a pair of tickets through one of the local papers he writes for, and boom: we were in.

We had to wait in line in the rain for almost an hour, so we missed about half of opener Cities Aviv's set, which would have been more of a bummer if the dude's voice hadn't been shredded. As it was, he was struggling to be heard, and the deep buzz of his beats was drowning out most of his attempts. Still pretty cool, but I felt like we weren't getting his best.

After a short break, the Death Grips dudes came out, peeled off their shirts, turned on the two huge Apple monitors that were standing on end behind them, and just beat everyone into submission over the course of a nonstop, 45-minute barrage. Then they were done. They walked off stage, the house lights quickly came up, and it was all over. Barely a goodbye and never even a hint of an encore. And it made perfect sense.

Those 45 minutes were machine-gun brutal, an assault that was both slow and forceful, chaotic but precise. They played shit from all their records - interesting considering they seem to refer to anything they haven't created in the last two weeks as irrelevant - and though they don't really have "hits," the elbow-throwing crowd did perk up during the opening thumps of "Guillotine" and "I've Seen Footage."

We just stood in the back and watched kids go apeshit on each other, and by the end I was exhausted even though I barely moved.

I have a feeling this will be one of those "Glad I got see them when I had the chance" shows, but I'm hoping it's not. The world needs more bands who proudly sell t-shirts with their dick-centric album cover on the front. 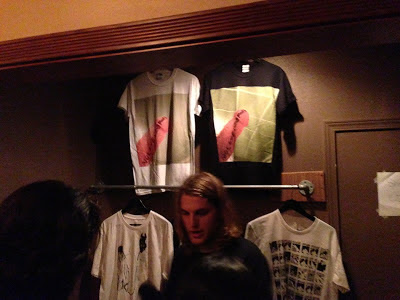 Posted by Wockenfuss at 5:15 PM