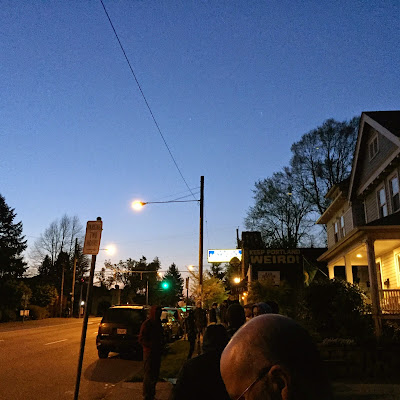 At this point I'm mostly going to Record Store Day just to do it. Yeah, there were a few things I really wanted to get this time around, but I could have shown up at Music Millennium way later than 5:30 AM and still copped those limited-ish releases. But: I actually like waiting in line with my friends once or twice a year, especially if it's to get into a record store. Plus, my brother was in town this RSD, and we wanted to make it an event. PLUS, I like to be back in bed by 9. (MM opens at 8, and actually one of the best parts of getting there early is leaving early with a bag full of shit and watching all the other people in line desperately speculate as to whether or not you bought the one thing they'll die without.)

So, yeah, we got there at 5:30 in the morning when it was still a little brisk, but it warmed up as the sun rose and we were probably 50th or so in line. Within hours the line was sprawling at least two blocks behind us. This picture does a terrible job of encapsulating the sheer volume, but you get the idea: 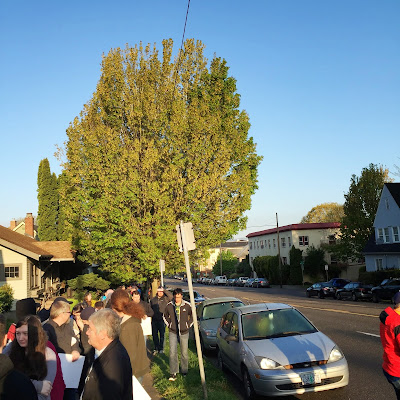 Once the doors opened, the line moved a little slower than it has in past years, but it's all in the name of order and fairness, and I'm super down with that.

I didn't grab much this year, but it sure cost me a lot! Here's what I went home with: 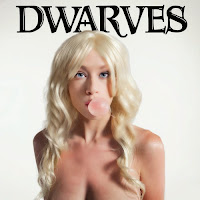 This was one of the records that I didn't want to leave without, and even though this thing was limited to 900 copies nationwide, there were more than enough to go around. Album version of the title cut, indistinguishable "remix" of "Sluts of the USA," and the non-album track, "Got Them Saints."

And a terrific back cover. 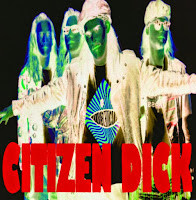 What can I say? I'm a sucker for Seattle nostalgia. Bonus points for this coming with a fake concert poster sticker, but man: one-sided vinyl with some wacky etching on the flip and I'm in a full ten bucks on this slab. 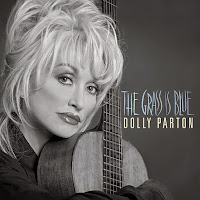 Dolly Parton - The Grass is Blue

This my wife's favorite Dolly Parton album, and she was actually excited about it being available on vinyl for the first time. (This was originally released in 1999, so it's no surprise that it was CD-only till now.) For some reason I thought it was going to be on blue vinyl, but it's just black. However, I did just notice that the cover of this LP is different than the original CD release, so that is something. 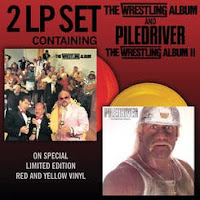 Uuuuuuugh the money I paid for this two-record set. I wasn't sure how they were going to do the cover and artwork on this one, and it's kind of odd: The Wrestling Album was a gatefold originally, so that's reproduced almost exactly, but with the red vinyl in the left pocket, and in the right, a slipcase repro of the original Piledriver single-LP cover, with yellow vinyl inside. There's one way to do it. 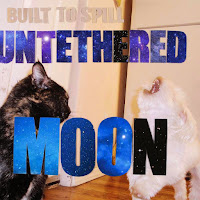 Picked this up while I was there. Haven't listened to it yet, but I appreciate that Built to Spill keep providing CD copies with their vinyl. It's nice. 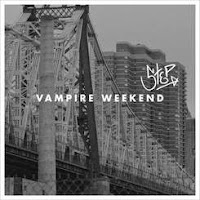 White vinyl and the B-side features the remix with Heems, Danny Brown, and Despot. This definitely feels like something I would buy. 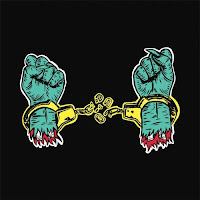 This one worked out well for me: This 12" collects not only a new track and the previously not-on-vinyl "Love Again," but also the other two Run the Jewels cuts that I did not have physical copies of: "Pew Pew Pew," which I think was on a different issue of the first album than I own, and "Blockbuster Night Part 2," which I think had only been released as a digital one-off single-type thing? The vinyl on this is smoky clear and it's in a clear slipcase - pretty sweet package. Not too expensive. Felt good about this one. 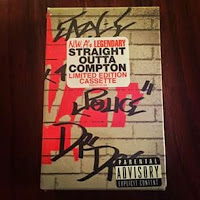 This, on the other hand... I gotta stop getting caught up in the moment.

Wow! Straight Outta Compton on cassette, but the cassette is red and there's a slipcover with shitty, phony, insulting graffiti on a cartoon brick wall! No better time for me to prove who the biggest N.W.A. fan in the world is - even though I own an original copy of the cassette and have no real use for this one!

A lot of remorse over this one. By next year I'll have it down to zero garbage.
Posted by Wockenfuss at 12:59 AM