How to Remove Price Tag Residue From Your LPs. 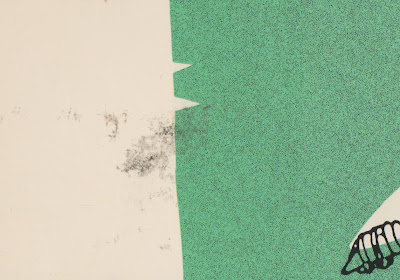 For me, my favorite part of my record collection is the actual music that's on the LPs. For the most part, I enjoy the songs that are on every piece of vinyl I own. Within that framework, I do get slightly obsessive when it comes to collecting the artists I like. I'd prefer an early pressing to a later one. If there's a rarer version of a certain LP, I'd like to have that one. And once I've purchased two albums by a band/artist, I'll feel the need to get all the full-lenths they ever released. It's the completist in me.

I spend a lot of my time shopping for records, thinking about records, and playing my records. So, it should come as no surprise that I want my records to look as nice as possible. It's all part of it for me. Even though they spend most of their time filed on a shelf, I want to be able to pull any LP out and know that it's going to look as sharp as can be. Bends in the cover or dinged corners aren't something I can do anything about. I bought the ticket, I knew what I was getting into. But I hate leaving the price tags on things. Because there is something I can do about that. And I do it.

I was thinking about this while I was going through the records I bought on my trip to L.A. (see my previous post), putting them in sleeves while generally examining their contents and playing some of them. Amoeba is one of those stores that puts price tags on both the cover and the actual record, so you've got twice the amount of work to do to get rid of them. They also use some of the gummiest stickers ever, so there's no clean peeling.

The process I use is still time-consuming, but it works, and it'll let you sleep at night, knowing there's not some tacky sticker clinging to your recent purchases. Basically, you just need to get yourself a bottle of this stuff: 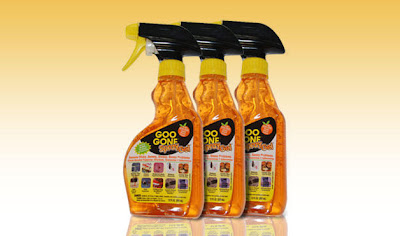 Goo Gone. I use the one pictured here, the spray gel formula. If you've ever pulled the old trick of using WD-40 to remove sticker gunk, this stuff works in the exact same way (really well), but instead of smelling like fuel, it smells like oranges. It gets rid of the gunk, quickly evaporates, and even the orange scent disappears pretty quickly too.

I usually peel the sticker off by hand - slowly and carefully - making sure I don't take any of the paper from the LP with it. If it comes off clean, sweet. If not, get as much as you can off with your fingernails, and then spray a tiny bit of the Goo Gone on a paper towel and rub that shit on the gunky area. Seriously - you hardly need to use any of the spray. If it's just a tiny bit of gunk, it'll come off easily. If you've still got paper from the sticker on there, that'll come off, too, but you'll have to use more of the spray gel. For a tough one, I'll rub the gunk with the most spray-saturated part of the towel, and thin flip the towel over and rub it with the dry side. For whatever reason, this not only dries the area, but it also seems to lift some of the chunks off.

This stuff works best on record covers with a glossy finish. It'll work on ones with a matte finish (and even straight-up cardboard - I'm looking at you, indie 7"s), but be careful: I've seen it take some of the ink with it. I've never come close to ruining a record cover, but I've slightly faded some deep black before.

Everyone's got their own methods for how to do this stuff; this is mine. It was on the brain. Thought I'd put it out there. Obviously, this stuff works way quicker on plastic. If you've got CD or DVD covers with gunk on 'em, you don't even have to worry about how much to use. Take the paper covers out of the case and just go nuts.

Word. I'm open to other suggestions.
Posted by Wockenfuss at 1:34 AM

I totally use Goo-Gone on my DVD cases. I buy mostly used ones and I hate the dirty feeling they have. Goo-Gone cleans off all the crap and leaves them feeling non-germ infested. It also works really well getting old Hollywood and Blockbuster stickers off, also. I wonder if it will help take some nasty stickers off of the actual paper slip case also. The paper is probably too thin.

Its funny, I used to leave all of my price tags on my records when I was younger. I liked knowing where they came from. So now what's cool is that I have House Of Records and Ranch Records price tags on a lot of old 45s. I love it. I don't leave price tags on anymore (I also don't have a record store that I LOVE like those mentioned either) and have even considered removing the old ones but I just can't do it. Seeing a House Of Records tag with a 1994 date on it makes me smile.

The worst price tags? CD/Game Exchange. Huge, ugly and impossible to get off. Those and late stage Wherehouse used tags. Those things need dynamite.