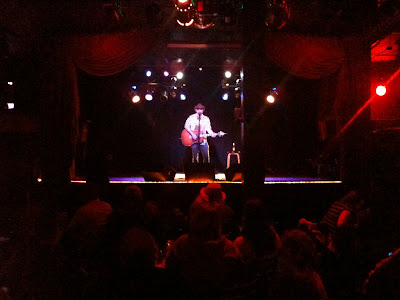 I just can't let go. I've been following him for too long. So when Supersuckers front dude Eddie Spaghetti comes to town, I go see him. And I always enjoy myself. I pretty much know what to expect from an Eddie Spaghetti solo show at this point, and while he covered the usual bases at this one, he also threw in some oddballs. And really, that's all you can ask for.

He was in good spirits, and unlike the last time I saw him, he was all by himself this time around. Eddie fancies himself a showman, so there's always plenty of banter with the crowd. But I've seen his show enough times now to know that a lot of it's made to look off-the-cuff, when it's really just part of the act. He has a bit where he "forgets the words" to "Cocaine Blues," which I didn't realize was a bit until I saw him do it for the second time last night. He also has his standard "Awesomeology" rant, which is usually reserved for Supersuckers shows, but he whipped it out at this one, though it was a shorter version than usual.

There's been an element of predictability in both Eddie's shows and Supersuckers shows for some time now, and it's clearly not going away. The 'Suckers mixed it up a little bit the last time I saw them, and that was nice, but before that they had been playing roughly the same set for years. Anyway, I'm not going to get off on that tangent. The show on Wednesday had some of that predictability, like I said, but there were some nice surprises.

Not sure that I had ever heard Eddie do "Bubblegum & Beer" by himself, which was pretty cool. A couple of meatheads stumbled in towards the end of the set and yelled, "Rock & Roll Records!," and as I scoffed, Eddie started it up and did the entire song - even some of the solo-y stuff. That was sweet. He also did a random cover of "Sammy Hagar Weekend" by Thelonious Monster, which I had never heard him do before. Other than that, it was the standard tunes. But he still delivers 'em like he cares, which is impressive.

And maybe I'm getting older and don't mind knowing what I'm going to get when I go to a show. But man, I felt like a chump surrounded by people who are only there to hear him do "Killer Weed" and "Non-Addictive Marijuana." Grim bunch.
Posted by Wockenfuss at 10:17 PM