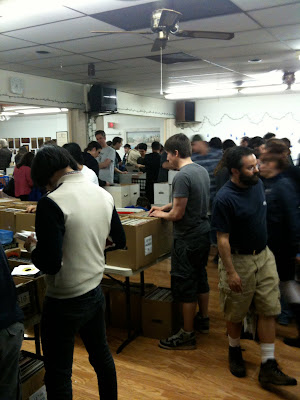 First off, sorry for the recent neglect of the Alert. Every once in a while, I need a breather. You know this. Not sure if I'm fully back yet, but this is a step in the right direction. And after the weekend I had, I'm more excited about music than I've been in a while. And I'm always pretty excited about it.

So, Saturday was a record-lovin' trifecta for me. Not only was it the date of the semi-annual Night Owl Record show in SE Portland, but it was also Record Store Day. And on top of those two already super-sweet things, it was also the day I finally got my good turntable back from the shop, where it's been sitting/"being repaired" for almost six months. Yes, my Marantz 6100 is finally back in action, and in proper working order, no less. The story behind why it took so long to repair is a boring one, but I'll just say this: if you live in Portland and you need turntable repairs, hit me up and I'll tell you where not to go.

Anyway. I started off my afternoon by picking up my turntable, and then I decided to hit Music Millennium to see how Record Store Day was working out. There were a few Record Store Day exclusives that I was hoping to cop, but I knew that since I was getting such a late start (4PM-ish), I didn't have much of a shot. The Millennium was packed, and that was cool to see. I didn't find the Pavement LP I was looking for, but I did pick up the Built to Spill "Water Sleepers" 7" that was released for the occasion. The A-side is an unreleased track from the There Is No Enemy sessions, and the B-side is a live version of "Linus and Lucy," which is awesome.

I still had a little time to kill before the 5PM start time for the record show, so I hit Jackpot on Hawthorne, just to make sure they were cleaned out. They were. Queens of the Stone Age reissued the "Feel Good Hit of the Summer" single on 10" and I thought about picking that up, but in the end I decided to save my scratch for the Night Owl. Glad I did.

I got there right at 5, and it was already crowded by the time I waited in line and got in. (They do a 3PM early admission for $15, so there were people in there before they even opened the doors for the 5PM $2 people.) Still, I was able to spend a good hour in there before it got to be too crowded for me to handle. And even when it was, I spent another half hour in slight misery, getting in where I could fit in. It all paid off. While I always have good luck at the Night Owl, this time I really came home with some great stuff. As usual, I could have spent another $500 bucks easily (on Melvins records alone, even), but I left feeling satisfied.

Here's what I got:

Archers of Loaf - Vitus Tinnitus 10": Not sure if this is rare or not, but I've certainly never come across it before. (Side note - ran into by buddy Robi at the show, and he scored a copy of the Archers' Icky Mettle on LP for 10 bucks. That was a sweet find. I paid much more than that for mine on eBay, and it's a hard one to get a hold of.)

Faith No More - The Real Thing: Can you believe I didn't have this on LP? I also didn't have their very first one (We Care A Lot) but I picked that up on eBay last week. The Real Thing has become somewhat of a rarity over the past year or so, so I was glad to snatch up a really nice copy.

Sir Mix-A-Lot - "My Hooptie" 12": Like I wasn't going to pick up some Seminar-era Mix-A-Lot for three bucks. Includes the non-album track "Society's Creation," which I haven't listened to yet.

Wool - Budspawn: I always thought "Medication" was a cool song, and it's on here. Combine that with blue vinyl and a $5 dollar price tag - I'm in.

Sonic Youth - The Destroyed Room: I've seen new copies of this 2006 b-sides collection around here and there, but never wanted to pay full price for it. Held out for the used copy, and found one.

Sonic Youth - Experimental Jet Set, Trash and No Star: Saw this on blue vinyl at the record show in Eugene a few months back; didn't want to pay $45 for it. Didn't. Got it at Night Owl for more than half that. Boom.

Minor Threat - First Two 7"s on a 12": Is that the official name of this thing? Either way, I got the reissued version on green vinyl, with a sweet lyric sheet/poster thingy.

Digital Underground - Sex Packets: Been waiting forever to find this on wax. Finally did. The cover and record seem to be in really good shape and I suspect reissue, but I can't find any date later than 1990 on it...

Beck - Guerolito: Had the CD, wanted the vinyl. Finally found it non-new.

Belle & Sebastian - Fold Your Hands Child, You Walk Like A Peasant: Been rocking The Boy With the Arab Strap recently, and wanted another one. Got it.

Karp/Rye Coalition - Split 12": Great cover, in great shape, with all the inserts. Shit's going to get noisy. (Speaking of noisy, the girl in front of me at the table I got this from bought a copy of godheadSilo's first LP that I totally would have bought. Bunk.)

Eagles of Death Metal - Peace, Love & Death Metal: This record never shows itself in public, and people try to charge way too much for it on eBay. Been wanting it for a while. Happy to finally have found it.

TV on the Radio - Desperate Youth, Bloodthirsty Babes: Had the CD for years, and record stores always charge way too much for the vinyl. Finally found it at a price I could feel good about.

Faith No More - "A Small Victory" 12": This is the one with the remixes on it, but it has a different track listing than the CD, I think. This LP is promo-only, I'm now realizing. Eh. Cool to have. And it was cheap.

They Might Be Giants - "(She Was A) Hotel Detective" 12": When I see TMBG shit on vinyl, I pretty much always buy it, because you don't often see it floating around. This thing is in great shape and I couldn't pass it up.

I had a little money left at the end, and on a whim picked up The Desolate One by Just-Ice. He had a song that I liked a lot when I was a kid, and the record was cheap. Got it home and realized the vinyl is a 12" single for one of the songs from the LP that I thought I bought. Lame. Now I don't know what to do. I don't want to throw it away, but I hate the mis-matchedness of it all. We'll see.

So that's how it went down. And with my turntable back in action, it all sounds better than ever. Feeling good.
Posted by Wockenfuss at 11:56 PM

Sounds like quite a few excellent finds. The Unwound 45 is their first release. I believe it was recorded while they were still in high school, before their self-titled album. The self-titled is awesome. For one reason or another it was not released until after "The Future Of What" but it is actually their first full-length, coming before "Fake Train." Both "Caterpillar" and the self-titled album got heavy play from me in the 90s (and now, who am I kidding?).

I also have "Vitus Tinnitus" on 10". I don't think it's rare but I have never seen it in person except for when I bought it. I never understand how that works. My vinyl copy of "The Real Thing" has a big gold promo stamp on the front. Does that make it more or less valuable. Funny that it is worth something now because I think I bought mine for 2 dollars. I have never played it.

I bought Wool's oddly titled "Box Set" CD in a dollar bin a while back and was annoyed that it didn't have "Medication." The album is not that great but I wonder if I would have dug it in '94. Did you know that it's the guys from Scream? Bizarre. Speaking of Dischord, I'm pretty sure that "First 2 7"s on a 12" is the proper title. Ian seems to love literal titles (i.e. "3 Songs," "7 Songs," etc.).

"Fold Your Hands, You Walk Like A Child" is a money album. It's probably my second favorite of theirs, although for some reason it has garnered the honor of being people's least favorite. I honestly don't get it. I also don't get the insane amount of praise that "Boy With The Arab Strap" gets. It's good but not as good as the albums that bookend it. At least for me anyways. I seem to be in the minority on that.

That Karp 12" is unbeatable. "Get Your Hands Off My Cake" is monumental and is their a better song title than "Obstacle Corpse?" Probably not. That sucks about missing out on the GodheadSilo album. That one is pretty rad. I have never seen it on vinyl.

Alright, get writing. You've had enough of a break.