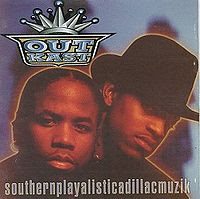 This record was released when the dudes in Outkast were 19, so they probably recorded it when they were 18. Look at those young-ass dudes. Getting shit done.

And getting it done right. While this will probably always be remembered as "The Outkast album that was recorded before Dre started dressing like a weirdo," it shouldn't be written off as not worthy of their catalog. Yeah, it's probably my least favorite album of theirs, but that's mostly because their other ones are so damn incredible. The fact that it only took Outkast one album to get tired of talking about pimpin' and gangsta shit and move on to bigger and better things is a testament to how smart these guys are. Sure, some of that stuff would get play in their later albums, but it seemed like it was just there to maintain a little cred (or maybe to appease the always-harder Big Boi). Maybe that's just my interpretation.

Either way, this is definitely the most un-Outkast of all the Outkast albums, but it also plants the seeds for what's to come. The beats slump in parts, but they maintain a consistency throughout the album. That ends up being both a good and a bad thing. If you're in the mood for Southern smoothness that thumps, you'll be good to go. If you're looking for them to mix it up a little more, you may get lulled into submission by the similarity of some of the tracks. Initially, at least. Once you spend some serious time with this record, the songs start to spread themselves apart. I'll admit, it took me a while to really get down with this whole thing.

A lot of the tracks are over five minutes long, so you've got to be ready to hang with 'em. "Git Up, Git Out" is a sweet song (with a surprising message), but at over seven minutes, it gets long. The tendency to hammer the hooks home is there, and it can get to be a bit much. "Funky Ride" is downright taxing. But, the raps are so dope that it usually doesn't matter. "D.E.E.P.," one of the last cuts on the record, foreshadows what's to come on the next record, and features Dre getting all abstract. It's cool shit, and it's one of the first signs of the group getting inside their own heads and seeing what comes out. It would serve them well in the future. You know that.