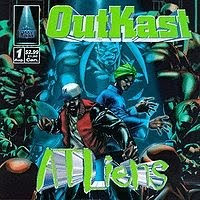 And here's where things start to get wonderfully weird.

It wouldn't be until their next record that Outkast would realize they needed to get almost completely unhinged for the public to take notice, but this was one more step in the right direction. Again, their penchant for slow grooves may have prevented them (initially) from grabbing the ears of the mass masses, but people who had already noticed them their first time out were ready for something more, and they got it. But it wasn't just more of the same. Though "Two Dope Boyz (In a Cadillac)" seemed determined to set the stage for Southernplayalisticadillacmuzik Part II, after that things shift gears quick. (Outkast have a knack for picking a lead-off track on their albums that has almost nothing to do with the rest of the songs. This would not be the last time.)

From Andre's verse on the title track, you can tell things aren't going to be business as usual. And if you saw the video, you knew they had either lost their minds (catacombs?) or were on some next-level shit that the rest of hip hop hadn't even begun to imagine yet. Thankfully, it was the latter. I could go on forever about how awesome it was that Dre shunned everything about traditional hip hop (especially in appearance), but I won't get off on that rant. You know what a gutsy move it was. And it would have backfired (within "popular" music, at least) if the music wouldn't have been so great that nobody could say a damn thing about it.

So, here, the rough template was set for the next phase of Outkast's career. Big Boi was the de facto hard-ass (ball cap), Andre was the still-searching philosopher (genie skully). You start the album with a one-minute ease-in - something that sounds like the beginning of a sci-fi flick. You juke 'em out with a first cut that sounds like it was left over from the last album, then you reel 'em in with an hour's worth of the dopest of the dope new shit. Somewhere near the end you let a slow, spacey groove ride for way too long and let Big Rube say a bunch of bizarre shit over the top of it.

And it all works.