Record Shopping at Amoeba in Hollywood, Part One. 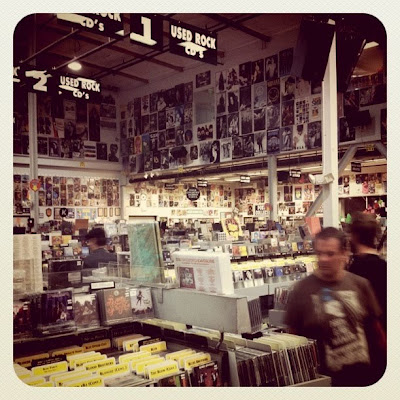 Almost a year to the day after I first set foot in what now is officially my favorite record store in the world, I had the chance to go back. For two nights. Of course, I didn't get to spend as much time as I would have liked, but considering everything else I had going on, I think I did OK. And, not surprisingly, I had no trouble spending my predetermined record budget, while also being careful to get just enough stuff to fill the empty space I left in my suitcase on the way there.

I was in Los Angeles for work, and staying at a hotel that was a little less than a mile from Amoeba. I had to work from 9-5 (ish) for the three days I was there, and on the third day I had to leave right after the work day was done. So, I only had two days to do what I was going to do Amoeba-wise.

My flight from Portland to LAX was delayed an hour, so instead of getting in at 11:30 on Wednesday night, I got in well after midnight, and by the time my packed shuttle dropped me off at my hotel, It was after 2 in the morning. I had to get up before 8, and I was mad tired Thursday morning. I caffeined my way through the day, but I was hurting by the time 5 rolled around. I decided to nap for a few hours, and then hit Amoeba. It was a nice walk, and a nice night. I was pretty out of it when I was there the first night, but I picked up some cool shit.

The second night was shaping up to be more of full-fledged evening, but that day I found out that the Sklar brothers were doing comedy at this comic book store... It's a long story. The point is, I took a break to go do that and my night was split into two hour-and-a-half speed-flipping sessions.

So, I guess that's the overview. I got a ton of shit, and it's going to take a few entries to get through this. I don't remember what I bought on which night, and it doesn't matter. These will be in no order. But do know this: all of this stuff cost me a grand total of about $150. I don't usually talk about prices in this blog, but I think you'll be amazed at what I got for that amount of money. 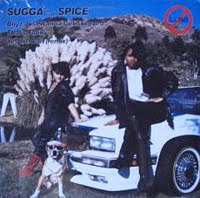 Not sure how well you can make out the cover there, but the dog sitting in front of the Caddy the ladies are posing on is wearing Oakley Blades and a huge gold rope with a "Dream Team" medallion dangling off it. That sealed the deal right there, but the "No JJ Fad" emblem in the top right was the icing on the cake. This sounds exactly like I thought it would - like a low-rent Salt-n-Pepa. And the JJ Fad diss track is awesome. 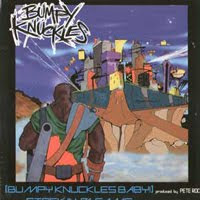 I feel like I own as ass-ton of Freddie Foxxx 12"s, but there still remain a bunch that I don't have. I honestly couldn't remember if I had this one or not, but it was only a few bucks, so I figured I'd get it, and if it turned out that it was already on my shelf, I could give it away. (I've made the mistake of not getting stuff like that too many times.) Turns out I didn't have it. Nothing really notable on here - the songs are both the album versions - but the cover is awesome, so I'm down. 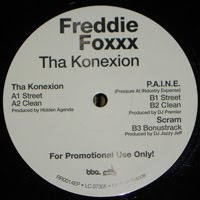 I'm not usually one for cover-less promo 12" singles, but for Bumpy I make an exception. This one is actually kind of cool. First off, there's no mention of Bumpy Knuckles on the label. Also, the track "Konexion" is here known as "Tha Konexion," which is a bit odd. But the best part is that it contains "Scram," a track from DJ Jazzy Jeff's 2002 album The Magnificent that features Bumpy on vocals. I did not have a copy of this song. And it is a good one. 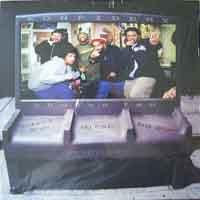 Had never even heard of this dude, but I was flipping through the hip-hop 12"s and saw Busdriver's mug on the front of this thing and I had to grab it. The title track is a posse cut featuring Busdriver, 2Mex, and Zig ESP, and it's a solid tune. Haven't had a chance to listen to the other two songs yet. LP has a blank white label, and Side 2 is instrumentals of the three Side 1 tracks. 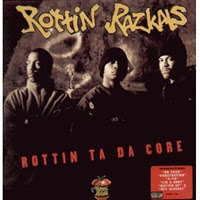 Treach tried hard to break this crew in the mid-90's, and it just wasn't in the cards. Naughty By Nature did the beats on this record, and they are dope as shit. I've had this on CD for a while, but had never come across the LP. Of course, Amoeba had two copies of it. Features sweet guest spots from Treach, as well as his other pet projects, Road Dawgs and Cruddy Click. Cool LP to have, even if it does have the gold promo stamp on the back. 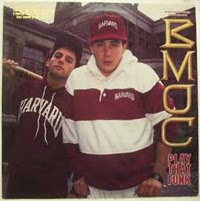 Two dudes in Harvard gear who call themselves Big Man on Campus? I'm in. This blatant attempt to cash in on the fame of the Beastie Boys is not nearly as terrible as I assumed it would be, but that's mostly because whoever did the music had their shit together. The drums are really solid, and apparently Nile Rogers produced it. It was executive produced by Brett Ratner, who now makes shitty movies. And it's on Sire records. Man, I miss the 80's. Such a weird one. And yes, it samples the shit out of "Play That Funky Music White Boy" or whatever that song is called. Hear it here. 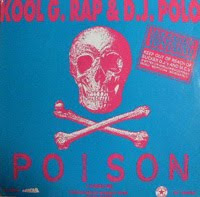 A sweet cut off the Road to the Riches LP, and yes, the one that Bell Biv Devoe sampled to make their hit of the same name. My Kool G. Rap collection is a sad one, and this makes things a little better. I love this song, and this single contains the album version, a really weird dub version, and a severely shortened radio edit. And the cover is awesome. Plus, I will literally purchase anything from 1988 or 1989 with the words "Produced by Marley Marl" on it.


All right - that's a good start. More to come soon.
Posted by Wockenfuss at 8:44 PM

That BMOC record is priceless. I wish we would have had that back in '88. Although it's kind of sad that those guys get outrapped by Sugga & Spice. Speaking of, how could they ever hope to be anything but a Salt-N-Pepa knock off with a name like that. That album cover is awesome. That Rottin' Razkals LP was a nice find and will look sweet on the shelf.