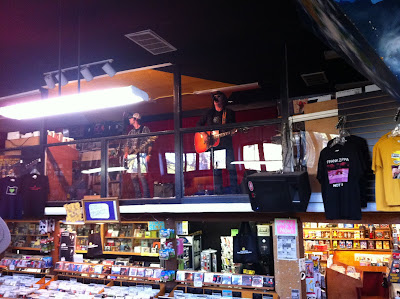 A double dose of Eddie Spaghetti? What a way to spend a Friday evening with my lady, who got dragged along to all this nonsense. But, she's a good sport, and she's been subjected to enough of this dude to be familiar with his catalog (or at least all the songs that he always plays live), so I figure that some of her crippling boredom is alleviated by the comforting familiarity of it all. Right? Isn't that how it works?

I found out about the Eddie Spaghetti show at Devils Point a few months ago, and I've had that shit marked on my calendar since then. But the Music Millennium performance? That was a last-minute surprise. In fact, I wouldn't even have known about it if I didn't follow the ol' Millennium on Twitter, where they announced it a few days before. I usually get my Eddie info from the Supersuckers chain of internet promotion, but their site is getting revamped and emails from them have been more sporadic than usual. Not sure what's up there. But it matters not: I found out about the pre-show in-store and, along with about twelve other Eddie Spaghetti faithfuls, watched Eddie and "Metal" Marty Chandler run through five or six songs from the hallowed Millennium balcony. They sounded pretty good, and after their truncated-because-of-low-attendance (I'm assuming) set, they offered to put anyone who bought the new LP (Sundowner) on the guest list for the show at Devils Point that night.

Turns out that was a pretty sweet deal, because admission to the show was ten bucks, and that record is awesome. So it was a win-win for people unlike me who already bought the album when it came out because they're a real fan. But, you know, that's neither here nor there. 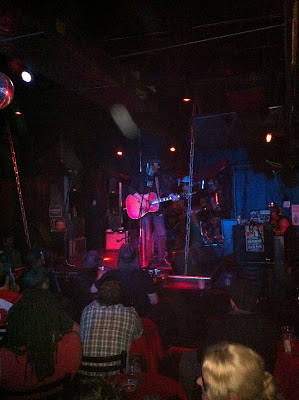 Devils Point (yes, apparently there is no apostrophe in the name) is a strip club, and one that seems to cater to a dirty rock sort of crowd. I used to spend time in joints like that years ago, but it had been a while since I'd been in one. I half-assumed there'd be dancers doing their thing while the bands were playing, but that was before I found out how tiny the place is. There's one stage, a handful of tables, and some pockets of standing room in the section where the stage is. The place was packed, and even though the space is small, there were a good amount of people there.

After a few opening acts that fit the outlaw-dude-with-an-acoustic-guitar vibe of the evening, Eddie and Marty hit the stage to raucous applause. (Eddie looked relieved to be getting up to play. The wife and I had a seat back by his merch table where he was hanging out, and we watched this drunk dude who kept telling anyone who would listen that he and Eddie "go way back" talking loudly in his face for at least an hour. It was awkward.) It was pushing 11, and the crowd of surly dudes and their dragged-along ladies were pretty hosed.

Depending on who you were, this either made for a great show or a kind-of annoying one. But, this is the deal with Eddie Spaghetti/Supersuckers shows, so I shan't bitch about it. The only part that sucks is that Eddie's solo gigs are usually all-requests, so the dude who screams the loudest often gets to pick the song. And, because I'm a snob/cool guy, I never yell anything and then am disappointed when he ends up playing what I consider the most obvious of tracks. But, that's my cross to bear, and it's an admittedly pathetic one. Still, it's applicable here, because the drunk dudes were yelling the same ol' song titles, and the set ended up consisting of a lot of the same tunes that Eddie always plays. Guess I can't fault him for giving the people what they want.

The ten-minute version of "Killer Weed" aside (ugh), this ended up being a peppy show in a weird-ass venue, and one that I'm glad I went to. The attempted rousing finale of "Born With a Tail" didn't have nearly the same effect as it does when played with a full band, but I suspect that some folks aren't happy unless their middle fingers are in the air at the end of the night. Fair enough.

Speaking of the end of the night: Eddie's set got cut slightly short because the strippers were lined up and ready to dance at midnight. It was hilarious and sad and my wife wouldn't let me stay and watch any of them. Damn.
Posted by Wockenfuss at 1:27 AM