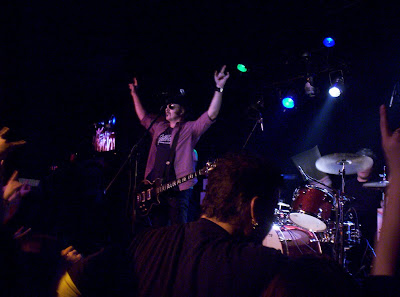 The 20th anniversary show in Seattle got me excited about the Supersuckers again, and when we found out they were playing a New Year's Eve bash in downtown Portland, the fiancée and I knew where we'd be ringing in 2009. (Or at least I did. She was gracious enough to accompany me.)

Because I'm an idiot, we showed up too late to catch Gerald Collier, who was the opening act for the evening. Apparently when they say they're starting the show at 9, they mean it. So, that was a bummer, but I have no one to blame but myself. We came into the fairly packed (and sold out) show during the beginning of Kleveland's set, and spent the next half hour reveling in the unbridled ass-rockiosity of it all. I really began to wonder if they were shooting a pilot for a new VH1 special about a band trying to "make it." Barre chords, rock clichés, drumstick twirling; it was all happening. But, when their lead singer took a pause between explaining what every single song was about to say that they were going to be playing with Hell's Belles soon, the thick-buttered cornball "look-out-we've-got-attitude!" thing made a little more sense. Then they covered Van Halen's "Everybody Wants Some," she dove into the crowd (seriously), climbed some scaffolding (really), and I realized, at that very moment, that I was living in a real-life deleted scene from Light of Day.

The Supersuckers came out at about 11:30, looking primed and ready. Eddie was rocking tight jeans and white pointy-loafer-type shoes that were both hilarious and somehow badass. We had positioned ourselves stage left in the very front, which from here on out in my life will be referred to as "Steakside." (Conversely, stage right will be known as the "Rontrose Zone.") So, we were in for a whole lot of Bolton, which was our plan. 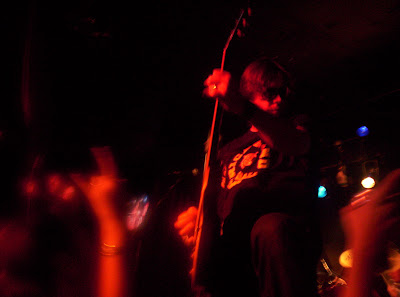 He did not disappoint.

This was "The Big Show," meaning they were slotted to do both rock and country sets. I was worried they might do the same set as the Seattle show, and while they played a lot of the same songs, they mixed 'em up and extended the country portion a bit, which was cool. They played a good smattering of old and new, and though I keep waiting for them to break out "I'm a Fucking Genius" from the new record, I haven't heard it yet. Of course, I could whine for days about the songs I wish they were playing. But that's me, I'm a hopeless fanboy.

At midnight, Eddie and Bolton brought their wives up, popped open some champagne, and we counted down the New Year. Here's a blurry photo of it: 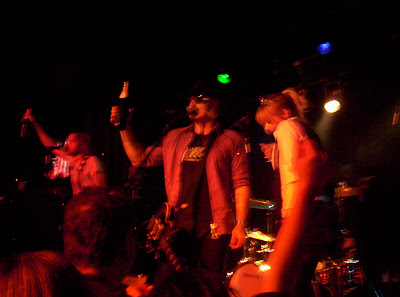 Eddie made a nice little speech, The Heath Man shared some bubbly with those in the Rontrose Zone (see, it's catching on already), and then they got back to the rock.

By the time they were through (after ending the show with the semi-standard "Goodbye"/"Patent-Pending Fake Encore"/"Cowboy Song"/"Born With A Tail"), they had played for a solid two hours, giving us all, in my opinion, our twenty bucks worth. But, in true fanboy style, when I saw they were offering limited edition posters (only 50 made!) to commemorate the evening at the merch table, I couldn't help but cough up some more scratch. 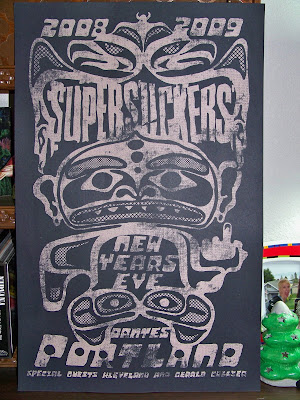 Not a bad way to spend New Year's Eve.
Posted by Wockenfuss at 1:58 AM

This was a great recap. Wish I could have been there. I love the phrase "Steakside." Somewhere I would always love to be. At the Widgets show they messed up what sides they were always on so I ended up "Nickside" at first and then moseyed on over to "Meierville" after taking a quick trip to "Ballantowne."

You also owe about a weeks worth of albums. Get to it. This blog is one of my few joys in life.