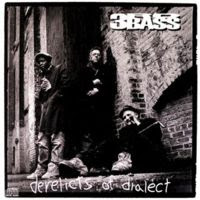 While 3rd Bass's best known album might be The Cactus, their best known song is probably "Pop Goes the Weasel," from this, their second full-length (The Cactus Revisited, a remix EP, was released in 1990 to tide fans over). This is no doubt due to the video, and you can't fault folks for retaining the indelible image of Henry Rollins, dressed as Vanilla Ice, catching a beatdown from Serch and Nice.

While targeting Ice was way too easy (and even a little late at this point), getting Rollins in the video gave them endless cred with the white kids and made for a lot of plays on MTV. For my money, this album is arguably better than its predecessor, as it's more polished, a little grittier, and Pete Nice seems to have only gotten better.

Unfortunately, this was to be the end for the Bass, as it was 1991 and the brightly colored, choreographed dance style they were known to flaunt went from cool to embarrassing overnight. They did one more single for the film Gladiator, and then went their separate ways.

Don't worry, I'll be getting to their solo albums.

"Portrait of the Artist as a Hood"