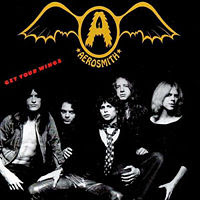 In 1987, I was 11 years old. Aerosmith had a hit with "Dude Looks Like A Lady," and I was all about it. I had seen the video (though not at home, as my mom had MTV blocked) and thought they looked a little old, but never thought much of it. To me, they were, first and foremost, the band that tag-teamed "Walk This Way" with Run-DMC. I must have known they had been around for a while, but it wasn't until my aunt slipped me her old LP of their Greatest Hits that I realized just how far back their pre-"Walk This Way" career spanned.

I began exploring their back catalog, buying a cassette of that Greatest Hits album so I could rock it, Walkman style, and checking out Rocks and Night In the Ruts from the library. They were alright, but when my neighbor (he was a few years younger than my parents) let me borrow this, their sophomore LP, I never gave it back. Listening to it now, I remember why: it is as good as any 70's hard rock out there.

The first side is solid, starting off with "Same Old Song and Dance," which is probably the most radio-friendly of all the songs here. The other three tracks on side one, "Lord of the Thighs," "Spaced," and "Woman of the World," are all fine, but they're really just the warm up for side two, where the band is all over the place, in the best way.

"S.O.S. (Too Bad)" is an almost flawless hard rock song, and before you have a chance to catch your breath, it tunnels into "Train Kept A Rollin'," which is just a fantastic barrage of guitar wailing and Steven Tyler yelping. I could probably do without the fake crowd noises, but you can see how they were trying to put their own stamp on the oft-covered song. After the mayhem dies down, the track bleeds into "Seasons of Wither," an almost-ballad (especially in comparison to the others) with a super catchy melody that could easily be a hit for them today. In fact, it's way better than anything they've done in the last ten years.

The album ends with "Pandora's Box," a song co-written by Joey Kramer (!), that works well as an easy, riff heavy, familiar end to the record. Ah, bands must miss the days when it was acceptable to put out an album with eight tracks on it. In a way, I do. There was less chance of filler.

Damn. Now I wish I had Toys In The Attic.

I remember that record well. I still have some records from that neighbor as well. Firesign Theatre anyone?