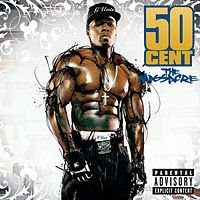 Given the success of 50's debut, we all knew he was going to be hard pressed to deliver with a follow up of the same caliber. When I saw that the first track on the album was called "In My Hood," I did not have high hopes.

My wariness turned out to be somewhat justified, but this album does pick up a bit after the lackluster opening track. "This Is 50" and "I'm Supposed to Die Tonight" are solid reminders of why 50 is often good at what he does. He knows how to put a song together, and when he mixes up his vocal styles, you don't really have a chance to get bored. He gets together with Eminem on "Gatman and Robbin'," which is ostensibly a hackneyed concept, but the production is solid and Eminem drops a pretty intense verse or two.

Still, the record gets slow in the second half and 50 insists on making it about four songs too long. But, in the end, it at least proves that he was no fluke.

Posted by Wockenfuss at 1:27 AM

What is with that album cover? First of all he is all lubed up like a Playgirl cover. Then what's with all the drawings and stuff? Just weird. And "Gatman and Robbins?" Lame lame lame. Ice to see you.