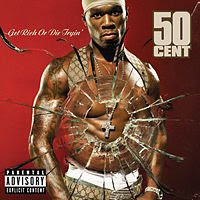 I tried not to like Fiddy. There was too much hype surrounding him, and after hearing "Wanksta," I still didn't understand what all the fuss was about. It must have been when I first heard "Heat" that I finally understood what he was going for. And on that track in particular, he was getting there.

This album remains a guilty pleasure for me, as I don't think 50 is nearly as good as his ego and record sales would indicate. But when it comes down to production and beats, this is one of the best gangsta rap albums of the last ten years.

It's too bad he couldn't keep it up.

Posted by Wockenfuss at 2:05 AM

Does he own a shirt? I still can't believe you rock this guy.