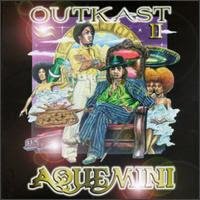 About a year ago, I made the bold statement that Ice Cube's Death Certificate is the best hip hop album ever. And while, if pressed, I would probably still stand by that claim, Aquemini is one of the only albums that really makes me think long and hard about it. In the end, it doesn't matter. They're both brilliant for completely different reasons, and though they're only seven years apart in release date, they're galaxies apart in both content and execution. So it's pointless to compare them. And I won't. But you get the idea: Aquemini is as close to flawless as you can get in the hip hop realm. And I have no problem standing by that claim.

This record came out in late September of 1998, right when I moved to Portland. One of my only friends up here - a real record freak - gave me this 3-LP album because it wasn't up to his standards. Not the music, mind you. The actual vinyl. He was, to put it nicely, very particular about his collection. If he sensed any flaw in the record or the cover, he didn't want it rubbing up against his other LPs. Needless to say, he was completely obsessive/compulsive, and it really was a troubling thing. However, as a fellow vinyl fanatic, he was a great guy to be friends with. I have an original copy of Radiohead's The Bends thanks to this guy. I think there might be some light fraying of the cardboard on one of the corners. Anyway.

The deal with this one was that during the intro ("Hold On, Be Strong"), the record emitted a slight pop in one spot during each revolution. Now, that track is about a minute long, has no lyrics, and while essential to the overall feel of the album, is really not one that you're going to miss if you skip by it. He couldn't deal. And, in his weird defense, the popping sound was quite audible. In fact, I taped this album and put it in my car (it's still in there, a decade and a different car later), and that's when I listened to it the most. "Hold On, Be Strong" now sounds weird to me when I hear it on CD because the pops are missing. Those damn pops.

So, yeah, this drove him batty and he wanted rid of it. I gladly took it off his hands because hey, free record that just came out. But also, I had heard Outkast here and there, and I liked what I heard. (It took this album for me to go back and get their first two.) I was ready to get in on the ground floor with this one. But man, I had no idea I was going to like it as much as I did. I immediately taped it, put it in my car (I already mentioned this), and unless I was terribly depressed and listening to Elliott Smith's XO, I was listening to this record. It blew my mind. It still does. Wu-Tang Clan changed the face of hip hop in '93. Outkast did it again in '98.

Once you get past the inexplicably incongruous "Return of the 'G,'" which is the only track on the album that even begins to falter (remember my theory about Outkast picking weird songs to lead off records?), the vocal loop from "Rosa Parks" fades in and things get completely nutso. Outkast needed a song like "Rosa Parks," and they needed a song like the one that follows it, the equally rambunctious "Skew it on the Bar-B." These were the types of beats that really allowed them to break out. These were the beats that sounded like Dré looked. And maybe Big Boi didn't realize it, but the dude must have quickly found out that he's the most bad-ass fast rapper on the planet. His verse on "Skew it on the Bar-B" will split your skull open. And he was just getting started.

Big Boi was always the more "traditional" rapper of the duo, and while his flexing continued to get stronger as Outkast progressed, it also got smarter and more focused. Happy to talk about pimpin' on the first record and working hard to find his own voice on the second (and basically getting there), he fully achieves it on the third. There's no one comparable to Big Boi, and there's no one comparable to Dré. And I don't mean that they're the best rappers in the world (though they're certainly up there), I mean that they just don't sound like anyone else. They became something new. And while Big Boi would go on to get more G'd out and André would go on to almost over-embrace the Prince/Hendrix thing, this was the album where they met the middle - where neither one of them had stretched things too far yet.

Tracks like "Slump," "Synthesizer," and "Chonkyfire" are all completely different in scope and subject, but they all make sense as a part of this record. So do both parts of "Da Art of Storytellin'." Somehow, so does the 8-minute "Liberation." (That's the track where Big Rube lets loose on this one.) In fact, almost all the songs on this thing are long as shit, and the fact that they don't feel like it just goes to show how little space is wasted on this record.

I'll admit that this record got to me at a time when I was really ready to ingest it, so maybe that has something to do with why I think it's so fantastic. But I can still listen to it, and I can still hear it. This record is straight-up unlike any other hip hop record. It's just...better. I mean, listen to "Da Art of Storytellin' (Part 2)" and tell me that's not a great, great song.

I was listening to this in my car last week. All the way through. And it still gets me.

I think I heard this album too late. Which is weird because I began working at Wherehouse shortly after it came out and we sold a ton of it. I even dug the cover. I just figured I wouldn't like it. It wasn't until years later that I bought a copy and got into it but it didn't blow my mind the way I expected it to. Don't get me wrong. I think it's great. Songs like "Slump," "Y'All Scared" and "Da Art Of Storytelling (Part 2)" are incredible. But the album didn't change my life.

However, "Da Art Of Storytelling (Part 1) belongs on my top 20 rap songs of all time list. So there's that.