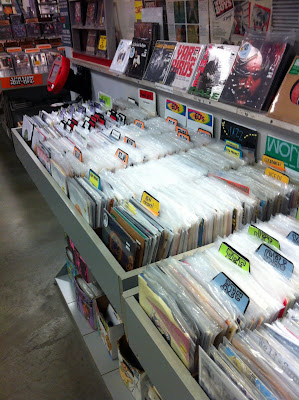 OK, I think I should be able to wrap up telling you about the stuff I bought at Amoeba in this post, and then we can move on to the exciting non-Amoeba stores I went to while I was down in California. But for now, I still have a handful of Amoeba-bought records to brag to you about. Let's do this. 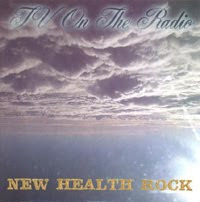 This single was released right around the same time as Desperate Youth, Blood Thirsty Babes - a short time afterward, I think - and I've remained blissfully unaware of it. I'm not even sure that I'd ever heard these two tracks. It's weird: I'm a huge TV on the Radio fan, but I've never gone on the hunt for any obscurities by the band. I own all their proper albums, but I've never taken it any further. Not really like me. Maybe I'm getting old and complacent. Or maybe this will kickstart some exploration. Either way, I have this now. Very dramatic cover. The B-side is "Modern Romance." 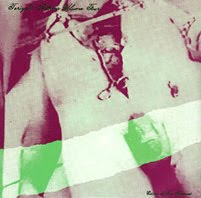 I bought another Teriyaki Asthma single sometime in the last few years; it was Volume Two and it's on red vinyl. This is Volume Four, and it's the black vinyl version. I think blue is the one to look for, but this was a buck so I grabbed it. I'm sure I'll come across the blue one at some point. This one has tracks from Alice Donut, Vexed, Icky Joey (The still-amazing "Josephine"), and God's Acre, and it's in nice condition. It's a probably a bad idea to start collecting these, because at some point I'll be tempted to shell out the dough for Volume One, which features Nirvana and is kind of expensive. We'll see what happens. 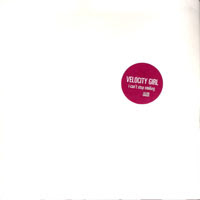 Velocity Girl may be the most wussy, poppy band that I listen to. I just realized that as I was rocking this double-7". Sometimes I feel like they're one step away from 10,000 Maniacs-ville. Anyway, Sub Pop loved them, as evidenced by this deluxe, gatefolded package that houses two singles on the inside, along with accompanying sticker sheets that encourage you to make your own cover. (And Beck thought he was being original with The Information when he did that - nice try, Hansen!) This is ¡Simpatico!-era stuff, and it features the album version of the title track, a bold remix of "Labrador," also from that record, and two non-album cuts, "Marzipan" and "Diamond Jubilee." 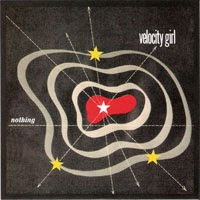 Another Velocity Girl single, but this one is Gilded Stars and Zealous Hearts-era. They were great about putting non-album stuff on their 7"s, and this one is no exception. The B-side is "Anatomy of a Gutless Wonder," and it's a solid track. Another instance where you can see why they left it off the album, but it wouldn't have seemed out of place if it had been included. This one's on translucent red vinyl with a few little blotches in it, and it doesn't have the big 45 hole. It's also got the later Sub Pop label. Check out a picture of it here if you wanna see what it looks like. 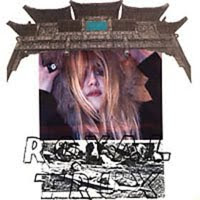 Amoeba is officially the only place I ever see Royal Trux singles in stores, and it seems like I consistently score more than one, to boot. This one seems to be from around the time of Cats and Dogs, and a like a lot of their singles, these two tracks (the B-side is the scuzzy "Law Man") would be included on the Singles, Live, Unreleased comp that came out in 1997 and was reissued again this year. I don't have that box set, and I'd rather have the original source anyway, so I had to pick this up. This is a quality era for RT, and these two songs are heroin-drenched awesomeness. Drag City label. 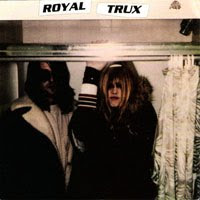 This one's from around the same time, but it's on Sub Pop as part of their Singles Club - April 1993, to be exact. Not sure what's up with the Grateful Dead imagery - there's even the actual Dead "Steal Your Face" dumbass logo on the back - but the Trux never really made much sense, so I guess it's best to not worry about it too much. "Steal Yr Face" is, for them, a pretty straightforward track, and the B-side, "Gett Off," is surprisingly listenable as well. (Not a Prince cover, if you were wondering.) This was a limited edition of 3,000 copies, and all of 'em are on sweet-looking purple marbled vinyl. 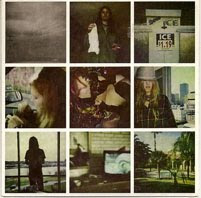 One from 1992, one from 1993, and this one's from 1994. I'm really getting it done. This one came after their "breakthrough" album Cats and Dogs, so maybe that's why the production sounds a bit stronger. Or maybe they were finally able to afford some decent equipment. Either way, it's still sloppy as heck, but the sound quality allows for some more of that intricate sloppiness to carry through. Both of these tracks (the B-side is "Shockwave Rider") - and the ones from the previous single, too - would end up on that box-set comp I mentioned earlier. I'll probably buy that at some point. For now, I'll just incrementally build up my collection. It's the American way. 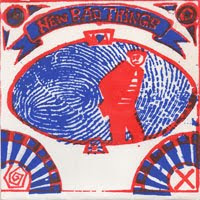 I'm not going to sit here and act like I've been down with New Bad Things since day one, because that wouldn't be true. In fact, It's only been recently that I've been checking out their stuff. I'm not proud of myself here, folks. This single is on Punk in My Vitamins, features a blatantly hand-screened cover, and is really cool. This one features "The Dirge," the song that my pals in Buttery Lords jacked the outro/coda/chorus thingy from for one of their songs. It's an awesome song and I can't believe I wasn't listening to it years ago. I would have loved this shit in the 90's. 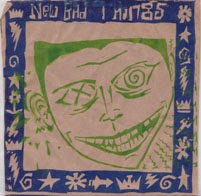 Ah, how I love a good five-track 7". There's only one song-that's-not-really-a-song on this record, and that's the goofy "Chewbacca," so that's cool. The other songs ("Robin Hood," "Click Town," "Let Her Stay," and "Lavender") are all two-or-three minute horn-assisted lo-fiers, and they just reek of Portland in the mid-90's. Nothing wrong with that. This one is on Candy Ass Records, and is in a hand-stamped sleeve that might be printed on a grocery bag. Meanwhile, the record has a very fancy-looking label. Oh, the DIY-ness of it all. Can't believe I found two different New Bad Things singles. These are the things that can happen within the fabled walls of Amoeba.

All right - I think that covers it for stuff that I bought at Amoeba. Next up, I'll tell you about the other stores I went to while I was in the Orange County area. They made for an interesting mix.
Posted by Wockenfuss at 9:21 PM