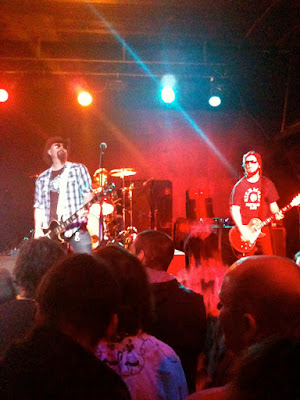 The Supersuckers hadn't come to Portland since New Year's Eve 2008, though fans of the Alert will recall that I did go to see Eddie Spaghetti (the 'Suckers lead dude, if you didn't know) play a solo gig this past summer. Since they're one of the only bands left that I'll go out of my way to see, I was ready for the show. But this time around things were going to be different, and I was a little worried.

I'll try to keep this brief, because I could probably write a book about the Supersuckers if I let myself go. So here's the short version, even though I probably mentioned some of this stuff before and I'm going to get much further into the details of all of it when we get to their albums. Anyway. The first time I saw the band was in 1991, and since then I've been a loyal fan. I've probably seen them live 20 times. Maybe more. I don't know. A lot. Over the years, they've gone through a lot of changes, both with their music and with their lineup. Around 1995, original guitarist Ron Heathman left the band, and they recorded their third studio album without him, replacing him with Rick Sims from the Didjits. This made me uneasy, but it was short-lived. Heathman rejoined the group before they recorded their next record.

Around 2003, original drummer Dancing Eagle left the group, and he didn't return. They kicked around with a few drummers before settling on Scott Churilla, who remains their drummer. This never sat well with me, but I got used to it. Around September of this past year, Eddie posted a weird message on the band's site about how they were getting ready to debut the "new look" Supersuckers. This made me nervous. Again, long story short - Heathman left the band again and had been replaced with "Metal" Marty Chandler, the dude who was playing with Eddie Spaghetti when I saw him at that solo show in August. I guess I should have wondered why Chandler knew so many Supersuckers songs so well when he was playing with Eddie, but I'm an idiot and don't put things like that together.

I love Ron "Rontrose" Heathman, and the idea of the band going on without him (and with only two remaining original members) wasn't sitting well with me. I watched some videos on YouTube, and really wasn't feeling it. It didn't look right, it didn't sound right; it just wasn't the same band. But I had to go see it for myself. So, Thursday night, the wife and I did just that. 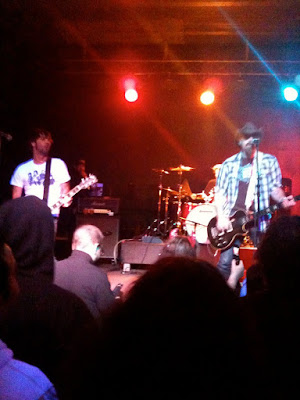 The opening bands were Kleveland (who we thankfully only caught the last song of) and Pure Country Gold, a two-piece guitar-and-drums outfit from Portland who were actually pretty cool, despite their goofy (and inaccurate - maybe that's the joke?) name. As usual, the crowd consisted of the most random group of people you can imagine: burnouts, buzzards, full-on old people (I'm talking 60), hammered fat guys, sleeve-tattooed punky dudes, chicks who look hot across a dark room like that but are mad haggard when you see them up close, and grown men who couldn't wait to slam dance, or "mosh" as the kids called it 20 years ago when it originally sucked. There was a dude standing near us who actually had a backwards hat on and a flannel tied around his waist. And he was in his 30's. There is always the sad mosh-pitting at the Supersuckers shows. It's embarrassing.

The 'Suckers took the stage a little before 10:30. Eddie has apparently finally shaved his head bald, and his goatee is long. He looked substantially creepy. Dan "The Steak" Bolton looked like he's lost some weight. Good for him. Dude looked trimmer than I've seen him in years. Churilla was buried behind his drums as usual, and Chandler looked like he was trying to be confident but is still wary of how the fans are going to react to him. I don't envy the guy: filling Rontrose's shoes is going to be impossible, and guys like me aren't really looking to like him. But I'm also not going to give him a hard time during the show. I'll just talk shit about his wanky playing to my wife in the car on the way home. Which I did. But I'm getting ahead of myself. 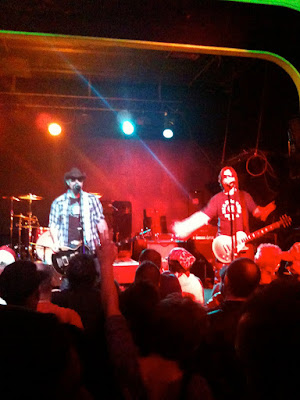 I don't want to pick the show apart too much, so I'll just get right to it: I didn't hate it as much as I thought I would. Which, to me, was a victory. The band wasn't in top form, but they were in decent spirits, and though I don't really like Chandler's guitar playing, he does an OK job on the songs. He's kind of got some cool guy shit going on that I don't really care for, but the guy's a guitar player. Whatever. He doesn't hold a candle to Heathman, but if the band is going to keep this thing going at whatever cost (which is clearly the case at this point), they could do worse than this dude. I'll just leave it at that.

Here's why the show didn't suck:

The setlist was solid. They played a good mix of songs from their entire catalog, which I hadn't seen them do in forever. They did end up doing a lot of the standards that they play almost every time I see them, but they also played "Fisticuffs," "Hot Rod Rally," and the rock version of "Sleepy Vampire." The biggest surprise came near the end of the show, when they played "What Love Is," a Dead Boys cover from their second 7". That was the highlight of the show for me. I hadn't seen them play that in forever.

They also didn't play "Creepy Jackalope Eye," which is a sign that they're moving out of their comfort zone. And I like that. And they didn't play a ton of stuff off the new record, which is a good thing.

Eddie and Bolton are still fun for me to watch. I can't deny it. I've got a soft spot for those dudes, especially The Steak. He's just too cool.

At one point "Metal" Marty was soloing in the front of the stage and hanging himself and his guitar over the edge. Some dumbass (this guy had been hopping around like an asshole all night) decided to grab his rhythm/treble toggler thingy and flip it up and down real fast. Chandler kicked the dude in the head. That was pretty sweet.

Also, Eddie kept intentionally knocking into Chandler while he was soloing, and came close to knocking him off the stage. Apparently this is what passes for initiation these days. 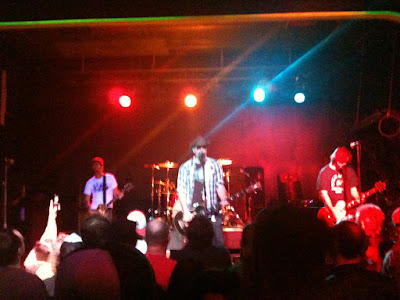 I had an OK time, all around. The $15 price tag on the tickets sucked, but I guess I don't mind supporting the band. I bought a t-shirt, too, so I guess I supported the shit out of 'em the other night.

Maybe I'm too set in may ways. I've been listening to the band for so long now that I can't turn my back on them. And they've been playing for so long that they can't quit now. Maybe we're all getting old. Maybe it's a comfortable rut and I don't mind being stuck in it. I think that's OK. If I had my way, the original band would still be playing together, but I guess it's amazing that they're still playing at all.

Strangely, the band announced on their site today that they've had an emergency and they're canceling all their upcoming tour dates. Hmmm. That doesn't sound good.
Posted by Wockenfuss at 1:45 AM

It's always nice to hear that they are busting out some old tunes. They always have a frustratingly limited setlist for a band with such a deep catalog. It's weird seeing a different guitar player with the band. At least they're still going, I suppose.