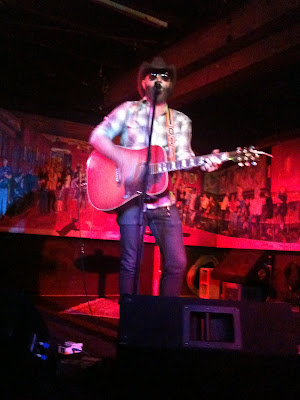 What strange timing. I just did my little blurb on The Junkyard Dogs, and then I go to see Eddie Spaghetti do his solo acoustic country-ish thing. Sometimes the universe aligns in such a way. Best not to question why.

The Supersuckers have been out of the States for a good portion of this year, so I haven't been able to see them aside from the first hour of 2009. So, when I heard that Eddie was doing an intimate acoustic gig at a bar in Seattle, I figured I'd drag the wife along for a little road trip. The 7PM starting time of the gig gave us time to drive home at a decent hour that night, so she couldn't complain too much. And I've successfully converted her into a Supersuckers/Eddie Spaghetti fan at this point anyway, so she didn't mind.

It was definitely worth the trip. Eddie's got a deep catalog of songs he can pull of with just him and his guitar: he does some Supersuckers stuff, some stuff off his two solo records, and plenty of covers. I had seen him once when he was billed solo previously, when he opened a Supersuckers show with Jordan Shapiro accompanying him. He started this gig out all by himself, but about four or five songs in he was joined by "Metal" Marty Chandler: 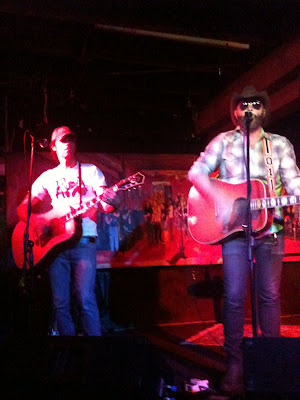 Marty's got some dexterity in his digits, and he did some great twangy solos. The duo played for about an hour and a half, running through probably 20 or 25 songs.

Some highlights included "Supersucker Drive-By Blues," Willie Nelson's "Always On My Mind," and Ween's "Piss Up a Rope." (These were personal highlights for me, because they're either new to Eddie's repertoire or not performed often.) I walked into the show hoping to hear "Bottom Dollar," "Little Ol' Wine Drinker Me," and "Doublewide." The first two were the first two songs of the set, and "Doublewide" showed up near the end.

I was satisfied enough to purchase an Eddie Spaghetti hoodie on our way out. Yes, I'm a merch-loving fanboy. Who sat in the front row. And even sang along when Eddie asked us to. He's the only dude I'll do that for.

Worth the three-hour drive, and a good way to spend a Saturday.
Posted by Wockenfuss at 1:04 AM

Eddie's package was distracting me throughout the show. When we went back to the merch booth I could barely make eye contact with his pregnant wife, I was so ashamed of myself.

Roy Jobi, pervert. Way to sing along dude. Its alright, I totally put my arm around David Ballantyne and sang every song at the Pond reunion show. Probably only band I would ever do that for. Except for The Widgets.