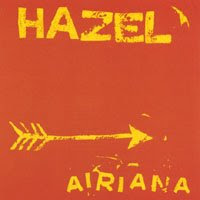 I'm not sure exactly what happened in the aftermath of Are You Going to Eat That, but by 1997 the band was no longer on Sub Pop and I don't remember even being sure that they were still together. So when this EP popped up, I was incredibly happy that they had decided to release some new music. The presence of only five songs made it painfully clear that this was to be the end of the band, but we were all thankful that they decided to release one more proper record (aside from all the 7"'s they put out over the years).

Airiana sounds like Hazel, but it doesn't sound much like their previous LPs. "Airiana" is their only song to feature Jody (without Pete) on lead vocals, and while it was initially hard for me to accept (I'm finicky like that), I've learned to love it. "Title Track" is one of Pete Kreb's finest moments, a song that instantly erases all the blatant instability of their previous record and gets back to some solid ambiguity. It also features some of the best lyrics he ever wrote for the band.

The second side continues what feels like an amended version of a Hazel record, with two terrific tracks that feature Jody and Pete intertwining their vocals with more abandon then ever before. "Ohio Player" feels like it could have been left over from the Are You Going to Eat That sessions, and "Mr. Magazine Man" is a scathing criticism of rock journalism (I think) that finds Pete and Jody singing distinctly separate parts that often cross paths in the most chaotic and crafty of ways. It's awesome.

Of course, it wouldn't be a Hazel record without the slow, wandering closer, and this time Pete comes up with a song that is part "Everybody's Best Friend" and also a telling harbinger of where he was going to take his music next–it's audibly twangier and more traditionally structured than anything he'd done previously.

And it makes a great track to end the Hazel legacy on. If you don't listen to this band, I don't know what to tell you. You're missing out.

"Ohio Player"
Posted by Wockenfuss at 2:46 AM

Placing "Airiana," the Jody song, first always struck me as a bad call. Not that I don't like the song but it jars me every time. I've always wished that they swapped it with "Title Track." Anyways, I too remember feeling like this was their last release and was actually surprised when it came out at all. While short it is still great and a pretty appropriate way for them to go out really: awkward and confusing. If I hadn't made it clear Pete Krebs is one of my musical heroes and Hazel is up there in my all-time favorite bands category. Everything about them, right down to their much talked about in-fighting, always seemed perfect to me.