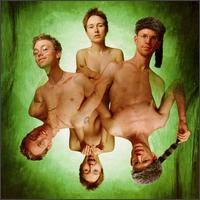 I feel like I saw Hazel opening for the Supersuckers in 1992, but I could be making that up. I'm fairly certain I saw them live before I ever heard this album, but that could be wrong, too. Either way, Hazel was a band that created a lot of buzz around the NW rock scene in the early 90's, not only for their music, but for their live show.

Drummer Jody Bleyle had been known to take her shirt off onstage (I never saw her do this), and while I'm sure there was some message behind it, it was certainly wasted on the teenage boys in the audience. But it got the dudes talking. Couple this with official fourth member Fred Nemo, their extravagant (I'll leave it at that–taking the time to actually explain Fred's shape-shifting maneuvers would take up too much space) dancer, and you've got yourself one of those "omigod-have-you-seen-them-yet?" bands that everyone in the "scene" was rumbling about. Oh, and they wrote really good songs. So, that didn't hurt, either.

Toreador of Love was their full-length debut after a Cavity Search-released 7" (and maybe another one...?), and I ate it up. When I think of NW 90's rock–the real shit, without the "grunge" label–this record is quick to pop into my head, and with good reason. I listened to it excessively. During the 90's, you wanted to hate the bands that everyone was praising so highly, but it was impossible not to like this. It's over 15 years later, and I still get off on hearing "J. Hell" and "Big Fatty."

Pete Krebs was an unassuming frontman for the band, a guy who almost looked the part (he wore a flannel shirt, but kept his hair short and wore wire-rimmed Lennon-esque glasses), played the sensitive role really well, but was also capable of coming across as direly pissed/frustrated in his singing and guitar playing. In fairness, it seemed like all the members of the band hated each other (especially Pete and Jody), so maybe he was just mad at the group and tired of the infighting. They were definitely one of those groups where you never knew what you were going to get; it ran the gamut between brilliance and train wreck.

This record is nothing short of brilliant, a collection of some really fine noisy pop songs that incorporate tried-and-true elements of songwriting (ba-ba's and doo-doo's) and methods your aren't likely to see anywhere else (including a propulsive instrumental about Boog Powell). Kreb's strength, as with many a good songwriter, lies both in his lyrics and his crazy knack for melody. Some of these songs are instantly catchy, but a good many of them are ones that take a while to grow inside your head. And as we all know, those are the songs that stick with you.

The band toggles between hope ("She's Supersonic," "Cosmic Allison") and acceptance ("Day Glo," "Everybody's Best Friend") with such fluidity that there manages to be little incongruity between the songs. Though it's odd: I've always thought of this record as a bit sad, or maybe skeptical is a better word for it. There's an undercurrent of doubt that gets glazed over a bit by the incredibly catchy melodies, but it's there. Kreb's lyrics aren't conspicuously complex, but they're more multifaceted than he lets on. Maybe that's why I've been able to listen to this record a jillion times.

"Truly" is a feat unto itself, a huge closer that throws everything that the band had previously played on the record out the window, instead opting for peaks-and-valleys approach that works insanely well. When you're 16 and you're in your bedroom alone, that's the go-to track.

I could go on forever. This is essential 90's rock, and it's always floored me that more people don't realize how important this band (and this record) is.

I have heard this record about a gazillion times. Hazel was quite legendary in our neck of the woods in their early days. I remember hearing all the stories about them before I ever heard them. My first intro to them was a live clip on Bohemia. I remember thinking that Pete Krebs looked like a cartoon character. Although there live shows were entertaining I never found them to be phony. Fred's dancing, something that should bother me, always seemed rather natural. Like, why wouldn't that guy be their dancer? What else can I say about this album other than it is what I consider a "NW classic." It was huge back home, not so much here in the desert or anywhere else. I think. I can't imagine high school without it.

Ahhh Fred, I recall a time their Bubmershoot performance was cut short due to his antics. Fred was doing his thing as always but somewhere during Hazel's set he'd acquired a pitcher of water. He decided it would be fun to balance it on his head right at the front of the stage. Needless to say the pitched did not stay on Fred's head very long, it along with it's liquid contents splashed across the stage. The stage manager freaked as I'm sure Fred's antics ruined at least one monitor. Hazel's set was cut short and I don't think they ever played Bumbershoot again.

Needless to say they we're awesome, had the pleasure of catching them several times back in the mid-90's.

you're right about one thing - we were NEVER invited back

where is also documented: