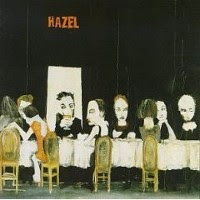 A few things happened between Hazel's first and second records: First, there was a mild backlash against the band, perhaps culminating in readers of The Rocket voting the group "Most Overrated Band" in one of their reader's polls (Biff: look this up for me). In the fickle mid-90's, folks were quick to poo-poo a band that everyone loved so much. And, given that Hazel's live shows were so unpredictable, they must have left some first-time concertgoers wondering what all the hype was about.

The second, and vastly more important event, was Pete Krebs getting dumped. Now, I'm no expert on the guy's personal life, but after listening to this record, it not only becomes clear that he's viciously lovelorn, but so much so that you'll wonder how he got out of bed to record it. In the insensibly understudied world of sophomore albums, and specifically those that can be denoted as "breakup records," this is one that ranks right up there with Pond's The Practice of Joy Before Death and 764-HERO's We're Solids. That may mean nothing to you, but trust me: it's huge where I come from.

There are 13 tracks on this LP, and by my count, nine of them deal directly with the breakup. Of the remaining four, one was written by bass player Brady Smith, one is about their dancer Fred, and the other two ("Chasing After James" and "A Perfect Pot") could be about the breakup; maybe I'm just not reading into them enough. So, what you've got here is an odd mix: the same frenetic pop that Hazel concocted on their first record, mixed with some of the most helpless, confused, and borderline suicidal lyrics ever committed to wax. (If you ever wondered why Pete and Elliott Smith were such good friends, now you know.)

Sound like a bummer? It ain't. This record is arguably better than their first (most people will tell you it isn't, but they're clueless), featuring a stone-faced Krebs who seems constantly on the verge of both crying and screaming. On tracks like "Lazy H" and "Blank Florida" he sounds so eerily calm that you almost look past the fact that he's singing lines like "As long as I forget to die/ I'm fortunate," and "I'll daydream failures in my room/ And bust apart all my chances." Clearly, this is a man who has lost most of his will to live, and I mean that in all seriousness.

Is it wrong that I'm glad it made for such a good record? Eh, it's been almost 15 years; I think it's fine to look back fondly on his pain. Clearly Krebs doesn't look back too fondly on this record–in the few instances when Hazel has reunited in the last decade, the only song they ever play from Are You Going to Eat That is "King Twist," the song about Fred. I'm pretty sure I saw him play "Ringing In My Ears" a few times solo about eight years ago, but I could be making that up.

I've never been able to decide if this is the best or worst album to listen to after a bad breakup. It's worked both ways for me after some less-than-amicable splits. I don't want to say I've welled up while listening to "Green Eyes," but let's just say I thought about it. When Pete sings "I'm a mess without you/ I lost the best friend I ever had," it still makes me cringe, bringing back memories of a time when I identified with his pain all too well.

And really, isn't that what a great record is supposed to do?

"Quick Jerk"
Posted by Wockenfuss at 3:22 AM

This record took me a few listens to get into when I first heard it (how spoiled I was in '95) but once it sunk its teeth in me it never let go. The tone of this one is much darker than the first, from the lyrics to the black cover, and the songs seem less dated to me now. This is the prototypical awkward second album and everything about it works. Pretty much every song on here is mixtape worthy. The video for "Quick Jerk" always made me real happy. This is hands down one of the best albums to come out of the whole NW 90s thing. The fact that they clowned Sub Pop on the inside just made it that much better and awkward.