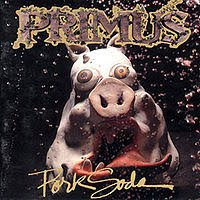 I distinctly remember buying this CD from Musicland in Salem Center when I was 17. It must have just come out, because I recall feeling excited about spotting it and having no idea that it was out. I made big plans to love it.

I never really did, though I do recall enjoying it for a short time. This album is ridiculously front-loaded, with the last five (maybe six, or even seven) songs being rough to listen to all in a row. Tracks like "Mr. Krinkle" and the title track were probably very fun for the band to play, but listening to them can be a bit grueling. And the eight-minute "Hamburger Train" is all kinds of wanky. But, I bet there are plenty of Primus fans who were way into that sort of thing. Some people just want to listen to Les Claypool slap the shit out of his bass for hours. Hence their shows over the last decade, which are like three hours long.

I always liked "Bob," "Nature Boy," and "Welcome to This World," but it was never enough for me to really hand myself over to this record like I had wanted to. And that's fine. I don't think I'm really the type to be a Primus fan anyway. I do remember buying Tales from the Punchbowl on cassette a few years after this, but I never got into that, either. Guess I hadn't learned.

I went to see Primus a few years back - think I mentioned this already - and they played a full set and performed the entire Frizzle Fry album. It is one of the only times I've left a show early. And by early, I mean at least two hours after it started. I gave it a go. Apparently that's my deal with this band.

I never really dug this album. I had liked "Seas Of Cheese" and "Frizzle Fry" through friends but this one just never did it. I still like the album cover though.